A New Guide for Job Seekers

For some early career physicists, the way forward after receiving a degree is clear—heading towards academia or a field that grabbed their interest in school. But others may find themselves wondering what to do with a physics degree or where to go next in their careers.

APS and the Institute of Physics Publishing (IOPP) in the UK have teamed up to alert early-career physicists to the many possibilities in the field with a new publication: the APS Careers 2020. Modeled after Physics World Careers published by the IOPP, which focused on career information for UK and EU physicists, the APS guide provides invaluable information for job seekers in the United States. The guide will be available to all APS members by the end of October.

Crystal Bailey, Head of Career Programs at APS, has been working closely with Tushna Commissariat and Edward Jost, both of IOP, to launch the new publication and provide a valuable resource to APS members.

“APS Careers 2020 is targeted to all members, with a special focus on early career physicists,” says Bailey, who managed the project from the APS side. “We made an effort to make sure this guide has something beneficial to members at all levels of their careers.” 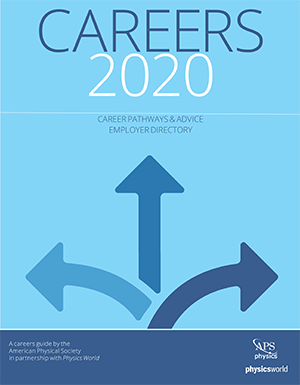 And serving members, especially those just starting out, is a key component of the recently implemented APS Strategic Plan, which states that “... to attract and retain members and to fully serve the current and next generation of physicists, we will grow and broaden the APS membership to include more physicists in industry and the private sector, and provide additional tangible member benefits.”

The guidebook contains a wealth of information focused on how someone with a physics degree can get a job outside of academia—and what some of those jobs are. More standard career-hunting advice, such as how to tailor a résumé for industrial job applications, is coupled with profiles of physicists with unconventional jobs. The guide also features a directory of companies, both industry and national labs, that are looking to hire people with physics degrees.

“Even though most physics graduates will pursue career paths outside of academia, many physics students will have only been exposed to academic research careers by the time they graduate,” Bailey noted.

“A physics degree is really a platform to take on genuinely almost any job anywhere in the world, and we want to make sure they know that so they don’t ever feel limited,” said Commissariat, reviews and careers editor for Physics World, IOP’s membership magazine.

For the past three years, IOP has been producing their own guide as an expansion of the careers information that was originally published in the member magazine.

“It was a lot of timeless stuff that we wanted people to see more regularly, so we put together the Physics World Careers guide with some of our best content coupled up with some profiles,” says Jost, Head of Media Business Development at IOP. “It’s gone down really well with our membership here at the Institute—one member claimed it was one of the best things he’d had as a member benefit in years of being a member at the institute.”

In October 2018, APS was approached by IOP with a proposal to partner in creating a version of the Physics World Careers guide that was appropriate for US audiences. Together, APS and IOP produced a collection of over 20 pieces of content for the APS Careers 2020, with the needs of APS members in mind.

Bailey worked closely with the IOP team to ensure that all parts of the guide came together in time for launch in October 2019. The APS communications group ensured that the publication is consistent with the APS brand and have created several promotional ads for APS programs to be included. Bailey also curated a number of professional development articles and profiles from a library of existing content to be included in the guide, as well as provided information to create new articles focusing on APS programs (such as the PIPELINE program, the IMPact program, and others).

As part of these contributions, APS has also helped connect the IOP sales team with US companies and national labs that could be featured in the employer directory, which was the most difficult aspect they encountered in expanding into US markets.

The directory, for example, includes the same type of information from each company that participated to ensure an easy comparison for job seekers. An important addition to this section, which keeps the international membership of APS in mind, is a question on whether companies require their employees to have a US visa. Articles are also included in the guide profiling some of the careers programs offered through APS that provide additional support for early-career physicists.

In addition, a popular section from the Physics World guide called “Once a Physicist” will be reprised in the APS guide, profiling people who have physics degrees who have used them to do something completely different.

“We've selected articles that feature careers in industry, high school physics teaching, and entrepreneurship; there is also a multi-page feature on careers in the field of medical physics,” Bailey said. “APS Careers 2020 is a tangible benefit that we are glad to be making available to our members and the broader physics community.”

For more on career resources at APS, visit the Careers website.