The 40th International School for Young Astronomers in Egypt

During the spring of 2018, Egypt hosted the 40th International School for Young Astronomers (ISYA) under the auspices of the International Astronomical Union (IAU) in Africa. It featured an impressive breadth of lecture topics, with hands-on experiences provided by an international team of lecturers in an accessible style, and group homework projects and group presentations by the very enthusiastic and dedicated participants.

ISYA has been organized by IAU since 1967 with the objective of broadening the perspective, knowledge, and awareness of astronomy through lectures from a team of international faculty on selected topics, in addition to seminars, practical exercises and observations, and opportunities to exchange experiences. ISYA is held mainly in developing countries, and attracts top postgraduate students pursuing a Master's Degree or PhD and young faculty members from the host country and neighboring countries in the region.

The effective structure of ISYA and its long-lasting impact on the participants suggest the possibility of creating a similar school for young physicists. APS, with its fast-growing international membership, could play a very important role in the enrichment and popularity of physics. 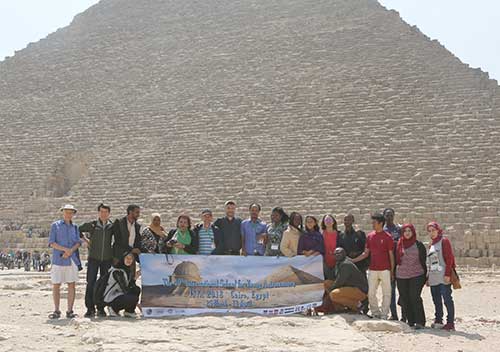 ISYA group holds banner in front of a pyramid in Giza, Egypt.

The 40th ISYA had 30 participants from eight countries: Egypt, Ethiopia, Ghana, Madagascar, Nigeria, Rwanda, Sudan, and Tanzania. Lecturers came from eight countries: Algeria, China, Egypt, Mexico, Norway, Russia, Spain, and the United States. The local organizer, the National Research Institute of Astronomy and Geophysics (NRIAG) at Helwan, arranged one week of the school at the Kottamia Observatory, which provided the opportunity for night observations, and two weeks at the Cataract Pyramids Resort near Cairo. Support came from Egyptian Academy of Scientific Research and Technology, NRIAG, and other educational institutions.

To make ISYA as accessible as possible for students and lecturers, IAU bears all costs related to the travel for international participants. The host country covers food, internal transportation, and lodging, typically through support from the Ministry of Higher Education and Research and donations from various organizations in the country.

I was an international lecturer for ISYA, and I gave talks on atomic processes in astrophysical plasmas, x-ray spectroscopy and plasma opacity of the sun. Other lecturers covered a variety of astronomy topics: general behavior of variable stars, interstellar matter, star formation, observational astronomy, optical photometry and spectroscopy, radio astronomy, solar system and solar physics, stellar astronomy, and stellar structure and evolution. Attendees also participated in hands-on sessions on data reduction and analysis.

The lecturers were passionate about both astronomy and helping ISYA students. During his lectures, Oleg Malkov, Department Head of Astronomy of Moscow State University, would run up the steps of the large auditorium to check whether the students were able to produce Hertzsprung-Russell diagrams of luminosity and temperature to classify a sample of stars from the GAIA databank.

In the evening all participants would go back to the large lecture room to work enthusiastically on the group projects until midnight. Often the lecturers would join them for encouragement but would do their own work. Past participants are often eager to sign up as lecturers to give something back to the program. The ISYA experience continues to inspire Somaya Saad who is the Head of the Center of Scientific Excellence in Astronomy and Space Science for NRIAG and local organizer of ISYA, and Nassim Seghouani who is the Director of Research at the Center of Research for Astronomy, Astrophysics, and Geophysics in Algeria.

During the weekends, students and lecturers took breaks from astronomy to see the sights of the host country. They visited the pyramids at Giza, rode a boat on the Nile, ate traditional Egyptian meals, and visited historical sites in Alexandria. Everyone gained knowledge of astronomy and memories of Egypt that will have a long-lasting impact.

Sultana Nahar is a professor of astronomy at the Ohio State University, co-director of the STEM ER Center, and adjunct professor of physics at Aligarh Muslim University and Cairo University.