Particle Physics on a Tabletop

The Large Hadron Collider may be the flashy face of particle physics, with its gargantuan tunnel and the attention of thousands of researchers. But smaller teams of physicists are quietly chipping away at similar fundamental particle physics questions using less expensive equipment. These tabletop experiments are small enough to fit in a single university lab and cost a mere several millions of dollars, as opposed to the LHC’s billions. At the APS April Meeting in Denver this year, researchers discussed their progress hunting for hypothesized exotic particles using these humbler setups.

Unlike, collider physicists, who investigate the bits and pieces left over from high energy particle collisions, tabletop experimentalists probe low-energy systems. These physicists look for any deviations from the Standard Model in parts per billion and smaller. Deviations, if they spot them, might hint at the existence of new particles.

Along with John Doyle (Harvard) and Gerald Gabrielse (Northwestern University), David DeMille of Yale University co-leads a collaboration to measure how round the electron is—the so-called electron electric dipole moment (EDM). This quantity describes how evenly the particle’s negative charge is distributed. A nonzero value would mean that the charge is not spread uniformly.

In the Standard Model, the electron is a point particle with zero EDM. But under real-world conditions, quantum field theory predicts that an electron constantly emits and reabsorbs virtual particles, which would make its charge distribution appear egg-shaped. Theory predicts that this asymmetry is so subtle that it cannot be detected with any conceivable experiment. So if DeMille’s team did discern a slight elongation to the electron, that would be evidence of new particles outside the Standard Model. In particular, these particles would have to violate charge-parity symmetry, which means that they could help explain why matter outnumbers antimatter in our universe. 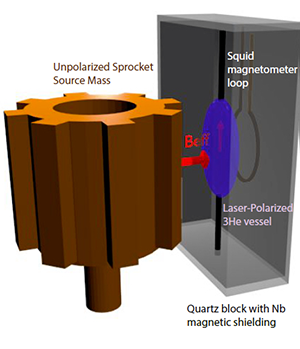 The ARIADNE experiment seeks to detect axions with a rotating mass interacting with spin-polarized helium nuclei.

The research team measures the electron EDM within molecules of thorium monoxide (ThO). This experiment, known as the Advanced Cold Molecule Electron Electric Dipole Moment Search (ACME), takes place in a basement laboratory at Harvard University. They vaporize ThO molecules within a cryogenic chamber, which exit to form a beam at 4 kelvin. Then, using lasers, they align the spins of the electrons in the ThO molecules. Electric and magnetic fields apply a torque to these spins, which causes the molecules’ spins to precess like wobbly tops, at two different rates depending on whether they are in one of two quantum states. As the molecules fly through the apparatus, this slow precession accumulates to change the direction of the electrons’ spin axes. Using fluorescence techniques, they can measure how the electron spin axes change in time. Molecules in different quantum states precess at different angles, and the difference in angle reveals the magnitude of the electron EDM.

In their latest measurement, published in October 2018 in Nature, the electron charge still appears perfectly round and uniform. This result, the most precise to date, is almost nine times more precise than their previous measurement published in 2014. DeMille characterizes ACME’s sensitivity this way: if an electron were the size of Earth, the experiment would be able to detect a three-nanometer-thick slice taken from the northern hemisphere and pasted on the southern hemisphere.

A Finer Value for Alpha

Holger Müller of the University of California, Berkeley, has been conducting a tabletop experiment to measure the fine structure constant, or alpha. This dimensionless number, equal to about 1/137, characterizes the strength of the electromagnetic interaction between elementary particles. Our universe looks the way that it does, in part, because alpha is what it is, says Müller. “It’s a huge puzzle in physics as to why the fine structure has this value,” he says. “It’s very important that it’s so small.”

The fine structure constant also relates the rest mass of an atom to its ground state energy. Müller measures the fine structure constant using this relationship: he finds alpha indirectly by measuring the mass of a cesium atom via atom interferometry. In the experiment, he uses a laser photon with a known momentum to kick a cesium atom that is in a superposition of two states. Of this superposition, only one receives the photon’s momentum; the other reflects it. Müller then lets the two states of this single atom interfere, and the resulting interference pattern reveals the cesium atom’s kinetic energy, which he can use to calculate its mass. He then uses this mass to calculate alpha.

Müller’s alpha measurement requires very few theoretical assumptions. “You only need very basic assumptions like momentum conservation,” he says. In contrast, the next best measurement of the fine structure constant is extremely indirect. Researchers calculate it from measurements of the electron magnetic moment, a calculation that involves the entire Standard Model and requires some 10,000 Feynman diagrams. The level of discrepancy also places bounds on the properties of several hypothesized particles, including one known as a dark photon. “If the dark photon exists, it must be extremely heavy or it must be weakly coupled to electrons,” says Müller.

Their latest measurement, published in April 2018 in Science, agrees with the next best result to about 2.5 sigma. But they plan to improve their experimental precision by better controlling the laser photons used to kick the cesium atoms, says Müller.

Andrew Geraci’s experiment, on the other hand, is just getting off the ground, having received full funding last year. The Northwestern University physicist is currently building a tabletop experiment for detecting axions. This hypothesized particle has two theoretical motivations: it explains why strong interactions preserve charge-parity symmetry in quantum chromodynamics, and it is also a candidate for dark matter.

The axion is supposed to mediate a tiny force that couples the mass of an object to an atom’s nuclear spin. Other tabletop experiments use various methods to search for axions, but Geraci’s experiment involves bringing a heavy tungsten wheel within tens of microns to a collection of helium nuclei. If the axion exists, it would cause the helium nuclei’s magnetic moment to precess. Geraci’s team will shield the apparatus from all other external magnetic fields and try to detect this tiny spin precession.

Geraci’s experiment should help determine the mass of the axion. “The axion mass determines how far the interaction can occur,” he says. So even if he doesn’t see the axion, he can place bounds on its mass. Currently, theory predictions are vague; the axion could exist over a mass range spanning nine orders of magnitude. Other researchers, such as those at the Axion Dark Matter Experiment, are probing a different mass range than Geraci.

Like their particle collider siblings, these tabletop experiments have not found compelling evidence for particles beyond the Standard Model. But DeMille is optimistic: these experiments seem poised to improve their precision steadily over the next few years.

DeMille’s EDM experiment is now sensitive to certain types of particles in the 30 TeV mass range, more than twice the highest collision energy achieved at the LHC. In this sense, they are paving the way for collider physicists. Tabletop experiments won’t replace collision experiments, as they are sensitive to different particle properties, but DeMille thinks that they can help guide collision experiments toward more fruitful research questions. “We’re going to be the advanced scouts for particle physics,” he says.

The author is a science writer in Tucson, Arizona.