What Next for Gravitational Wave Detection?

The first generation of post-detection physicists has also arrived. “I joined LIGO right after the first discovery,” says Maya Fishbach, a fourth-year graduate student from the University of Chicago, who presented her research at the APS April Meeting in Denver this year.

She remembers another landmark moment—the first signals from a neutron star merger in August 2017—when she was “still a baby grad student.” This event was the first in which electromagnetic observations from radio wavelengths to gamma rays all came together to herald the new era of multi-messenger astronomy. Now, researchers can observe electromagnetic and gravitational waves in tandem to study astrophysical events in richer detail than ever before see the Physics article. 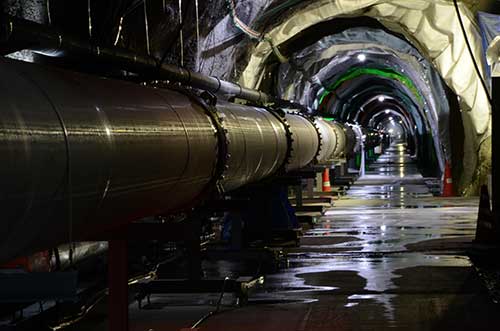 Future facilities will include KAGRA (Kamioka Gravitational Wave Detector) in Japan, designed to be the first underground gravitational wave observatory.

Coordinating largely online, the thousand-person collaboration sprinted to publish around a dozen papers in the month following the neutron star merger. “It’s really exciting, but also really exhausting to work with so many people,” says Fishbach. “I feel like I’ve aged so much.”

LIGO, working with its European counterpart, Virgo, has kept up the pace of detection, analysis, and scientific debate. The collaboration turned on their three gravitational wave observatories for a third observing run on April 1. Prior to this, they’d improved the sensitivity of their detectors—one in Livingston, Louisiana, one in Hanford, Washington, and one near Pisa, Italy—by 40 percent. By May 23, the detectors had already registered 13 more candidate signals. They are currently confirming the signals and preparing for more detections in a year-long observing run.

The confirmed detections so far: 10 gravitational waves from binary black hole mergers and one gravitational wave from a binary neutron star merger. The candidate signals include 10 possible black hole mergers, two neutron star mergers, and one neutron star merging with a black hole. The researchers have moved away from their previous mode of secrecy. They now immediately release public alerts when they pick up interesting signals, which guides their collaborators at conventional telescopes to look for potential accompanying electromagnetic signals. The community has split in two directions: those who work on detection, and those who sift through the data for new astrophysics, says Fishbach.

Working in the second camp, Fishbach uses gravitational wave data to study cosmology. Among the biggest mysteries is the value of the Hubble constant, a number that describes the rate at which the universe is expanding. Cosmologists have calculated the Hubble constant using two independent methods, but the answers disagree by about four standard deviations. One method, using localized measurements of supernovae, has delivered Hubble constant values around 74.03±1.42 kilometers per second per megaparsec, while the other method, based on cosmic microwave background observations, delivers values of around 67.4±0.5.

Researchers are also using gravitational waves to better understand black holes. LIGO’s detectors are sensitive to stellar mass black holes up to 100 times the mass of the sun—and quite efficient at finding them, too, compared to X-ray telescope efforts since the 1970s. If you count both black holes in each merger, “we’re now at the point where we’ve discovered as many [stellar mass black holes] with gravitational waves as we have with X-rays,” says Christopher Berry of Northwestern University.

Studying stellar-mass black holes could help them understand larger black holes, including the behemoth recently imaged by the Event Horizon Telescope, M87, which is 6.5 billion times the mass of the sun (see box at bottom of page). “One of the biggest questions in astrophysics right now is, where do supermassive black holes come from?” says Berry.

One hypothesis is that they form from small black holes merging together. But astronomers have only observed either black holes five to fifty times the mass of the sun, or supermassive black holes, which are hundreds of thousands to billions of times more massive than the sun. “We’ve not seen anything in between,” says Berry. It’s unclear why these intermediate-scale black holes are so rare, or if they even exist. Consequently, it is unclear how a stellar black hole might become supermassive.

The data can also reveal more about the life and death of stars. “I have a colleague who likes to refer to this as black hole paleontology,” says Berry. “Just how paleontologists try to figure out how dinosaurs lived by looking at their bones, we’re trying to figure out how massive stars lived by looking at their remnants, black holes and neutron stars.”

Gravitational waves from black hole mergers can reveal a lot about the objects involved. Theoretically, all you need to know to fully characterize a black hole are its mass, angular momentum, and electric charge. And because physical black holes are all neutrally charged, really all researchers need to find out are its mass and angular momentum.

LIGO and Virgo are hoping for a Japan-based detector, called KAGRA, to join the network before the third observing run ends. LIGO is also planning to build another observatory in India, to turn online in the mid-2020s. Further ahead, the European Space Agency plans to launch the Laser Interferometer Space Antenna (LISA) in 2034, which should detect gravitational waves of low frequencies that are undetectable on Earth due to noise. “I’m definitely excited for the era where we have hundreds of [detections],” says Fishbach. “We’ll be able to do so much science.”