Robots have been created to explore the remote and harsh environments of the deep sea and the surface of Mars. Now, Marc Miskin and his colleagues at Cornell have developed tiny robots that can explore new environments closer to home, including the human body, at the fundamental scale of biology—the cell.

These cell-sized robots at their largest are the width of a human hair but come equipped with an arsenal of microelectronics for moving around and sensing their environment—and each one costs less than a cent. Miskin, now an associate professor at the University of Pennsylvania, presented results of his post-doctoral research involving the creation of these tiny tools at the 2019 APS March Meeting in Boston.

“There's this alien, bizarre universe that we know exists in drops of water and blood and all over, but we can't participate in it—we have to just watch it,” said Miskin. “What I love about this research is that we are building things can now go into that world, explore, perform tasks, move things around, and you can do this with precision that is accorded to you by robotics.” 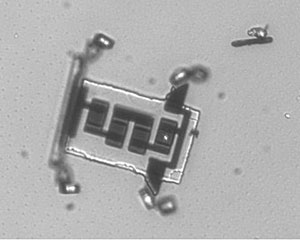 Robots no bigger than a biological cell are taking baby steps.

Miskin's microbots incorporate photovoltaics for power and can move around thanks to nanometer-thick legs built into the body that activate in response to laser light. The legs are small in comparison to the size of the robotic body, but the bots can scoot an impressive distance: The longest recorded excursion—the length of a microscope slide—is the equivalent of a person walking 10 kilometers. Future versions will harbor silicon sensors for projects like mapping the brain or delivering drugs inside the body.

Fortunately, manufacturing each robot doesn’t require a microscopic assembly line: Using nanofabrication techniques, the components for the robots are etched onto a 4-inch silicon wafer. One wafer can yield up to a million individual robots.

“They cost less than a cent each, so unlike a macroscopic robot, these robots are disposable,” says Miskin. “They're like medicine or like microorganisms. You can throw any individual robot away. And most importantly, all of this functionality is not at some arbitrary length scale, but at the fundamental size of biology, the size of the cell.”

Thanks to their small size and tough constitutions, these robots are incredibly robust, allowing them to be injected into new and sometimes corrosive environments—including the body. Miskin is currently working on providing these robots with ways to sense their environment, like voltmeters and thermometers, and ways for the robots to report back information about their world.

“One of the applications we like most is neural recording and recording what’s going on inside the body,” said Miskin. “Let's say you want to measure what's going on with someone's spinal cord—you don't want to be poking around in there. It might be nicer to inject robots in your body and have them crawl over to that location.”

Figuring out how to control these tiny robots inside the body is still a challenge, since the robots are powered by light. If the robots are more than a millimeter deep in tissue, they lose their power source. As a result, Miskin and his colleagues are working on alternative methods of powering the robots, such as magnetic fields.

These robots could have other uses outside of biology too: Miskin is also interested in seeing how these robots could be used in conjunction with chemistry and material growth. Another of his colleagues is working on ways to use these tiny robots to scrub out poisons from lithum ion batteries to extend battery life.

“The big advantage here is if they're manufacturable and they're cheap, they're like a chemical,” said Miskin. “And then you can start to treat them that way and really push the edge of the envelope.”