On April 10, 2019, the Event Horizon Telescope collaboration (eventhorizontelescope.org) released the first direct image of a black hole. The picture spread across online and print media, even making it to the front page of The New York Times. At the APS April Meeting in Denver, two members of the collaboration, Shep Doeleman (Harvard University) and Avery Broderick (University of Waterloo), sat down with APS News to explain their iconic photograph. The following is a summary of the key facts and figures. 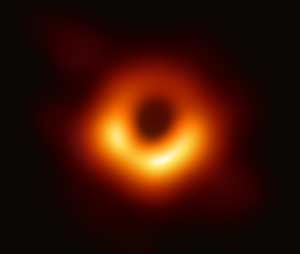 Portrait of a black hole.

Orientation: The image shows the black hole almost directly face-on: its angular momentum vector points into the page at an angle of 17 degrees, counterclockwise. That is, the black hole rotates in the clockwise direction. The researchers infer its orientation from the position of a jet that appears in X-ray images of the area and from models they have built and tested.

Notable features: The light comes from gas, predominantly hydrogen, which orbits the black hole and emits radio waves. The bright ring of light is the so-called photon orbit, where gravity is so strong that it bends light in closed paths around the black hole. Researchers refer to the boundary between the ring of light and the interior darkness the black hole’s shadow. “It’s the telltale signature of the event horizon,” says Doeleman.

Image Processing: The raw telescope data is missing parts of the image and requires image reconstruction to fill in the gaps. The researchers reconstructed the image in three parallel efforts, says Broderick. One team filled in the missing parts with mathematical algorithms, for example, that assume the image comes from point sources. The two other teams used two different astrophysical models to fill in the missing pixels. They compared the three different images and found that they agreed to a high statistical threshold. Ultimately, this image is a composite of the three efforts.

The gas is actually evenly distributed around the black hole. But its emitted light is distorted from gravitational lensing effects. One predominant effect is so-called relativistic beaming, or Doppler boosting, which causes light moving toward Earth to appear brighter and makes the donut brighter on one side.