Over 300 scientists congregated in Accra, Ghana from January 28 to February 2 to discuss progress and ways to move forward with an African synchrotron. This second African Light Source (AfLS) Conference was the first to be held in Africa, and attracted twice as many as the inaugural conference, which was held in Grenoble, France in 2015.

In addition to the scientists who attended, high-ranking members of the Ghanaian government attended; the keynote address was delivered by Minister of Environment, Science, Technology, and Innovation Kwabena Frimpong Boateng, and President Nana Akufo-Addo pledged to support the African Light Source (AfLS) initiative.

“The most exciting thing is the Ghanaian government’s excitement about the project,” said Simon Connell, a physicist at the University of Johannesburg and the chair of the AfLS organizing committee.

At the first AfLS meeting, the attendees generated five “Grenoble Resolutions” establishing the importance of a light source in Africa, and a roadmap to planning the AfLS. Now, some of those initial goals are starting to be met. 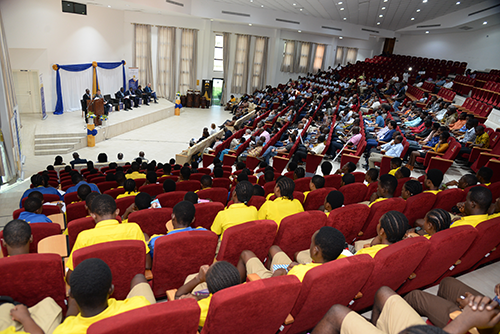 There are 47 light sources around the world, but none currently in Africa. Synchrotron light sources are massive electron accelerators that generate high intensity X-ray, ultraviolet, and infrared light. This light enables a variety of precision measurements across fields as diverse as drug discovery to paleontology.

“For us scientists who are in the Diaspora, the most important thing is coming together,” he said. “Even before we have a proper light source in Africa, [the AfLS project] is a door for collaboration between African scientists.” The work Ngabonziza does in Germany is not possible with present facilities in Africa.

“Prosper is an excellent scientist, but he's not in Africa. If we're successful, he can come back in Africa,” Connell said.

At the meeting, conferees discussed the unique science that could be done at the AfLS. Study of diseases is a good example of this, according to Connell. Often, viruses that are more common in Africa, like specific strains of HIV, are ignored in the rest of the world. Precedent for large-scale African science exists in collaborations like the African Laser Centre, and facilities like the Southern African Large Telescope.

Right now, the logistics and ethics of sample transfer in and out of the continent can be tricky, and having facilities in Africa would ease some barriers to research. One plenary talk focused on the paleontological possibilities with the AfLS. Instead of transporting fossil samples out of Africa, and all the complications involved with that, researchers could ship them to closer colleagues, or more easily make the trek themselves.

This concern about location is also why the second meeting took place in Accra and not in Europe again. “It's easier to get participants, it's more serious, in terms of being a real African initiative,” said Sekazi Mtingwa, a retired accelerator physicist from MIT. An African location also makes it easier for African scientists to perform experiments at it—nearly 80 percent of the attendees were based in Africa.

Still, international attendees from 5 other continents journeyed to Accra.

“In the 1970s–80s, many scientists in the U.S., Europe…helped us to realize a synchrotron facility in Japan,” said Hitoshi Abe, a physicist at KEK. “Now it’s our turn to support the AfLS project.”

Interest in the AfLS goes beyond just the synchrotron community, and the meeting had scientific sponsors around the world, including DESY, the International Atomic Energy Agency, and Brookhaven National Lab’s National Synchrotron Light Source-II.

Connell is careful to clarify that this is still fundamentally an Pan-African project. “There’s no element of neo-colonialism, of the West thinking ‘This is something Africa must have,’” he said. “Africa wants this.”

The intent is that African nations would also be footing the majority of the bill for construction and operations. In the next few years, the AfLS organizing committee will generate a business plan that lays out models for how funding could be apportioned. So far, no nation has explicitly committed a monetary amount for the project, which would likely cost several hundreds of millions to a few billion U.S. dollars.

Some cost-cutting proposals have included reusing spare parts from other synchrotrons that have been decommissioned. “We already rejected getting parts from the NSLS I,” Connell said. “I don't see any point in Africa having one that someone else cast off because the technology was behind.”

This year’s AfLS meeting was held jointly with the Pan-African Conference on Crystallography as a way of broadening the scope of scientists, in part because the AfLS is relevant to their work. Many attendees of the crystallography conference had used a synchrotron in their research. They plan to exploit this synergy for future endeavors. “A light source is something that all people doing crystallography would aspire to, ultimately,” said Connell.

So what are the next steps? The AfLS group is working on a Pre-Conceptual Design report—a main short-term goal—which they hope to send out in the next few weeks. This strategic plan would include specifications about the power of the synchrotron, including its beamlines and a business plan for acquiring resources to carry it out. Deciding an actual location will be one of the later tasks.

Luckily, there are models to work from. Researchers said they look to models like SIRIUS in Brazil as something to emulate. One of the key features of these light sources is that they trained a large number of scientists at international light sources and then managed to lure most back once the local light went online. The AfLS group hopes to send many young African scientists to synchrotrons for training, increasing the numbers of trainees from a few to hundreds.

More plans will be laid out next year, when the next African Light Source Conference is held in the third week of November 2020 at a location still to be decided.

The author is a freelance writer in New York.