A Mile in My Shoes: The Story of My Personal Journey to a Fulfilling Physics Career, and What You Can Learn from It

In my role at APS, I’m often in the position of advising students about the career outcomes they might expect once they receive their degree. A big part of my mission at APS is helping students to expand their vision beyond the confines of academia to encompass a much broader spectrum of possibility (as an aside, did you know that out of all physics Ph.D.s initially employed in potentially permanent positions, 70% were in the private sector? You can read a lot more about that in an AIP Statistical Research Center report, and in an article I wrote in 2013 for the FGSA Newsletter).

In the process of advising students about careers I am also occasionally in the position to share details about my own personal career journey from a nuclear physics graduate student to a program manager at one of the largest physics societies in the world—and the “cautionary tales” that come along with that story. So I would like to take a moment to share three key pieces of advice that I wish someone had been there to give me as I embarked on my graduate education in physics. 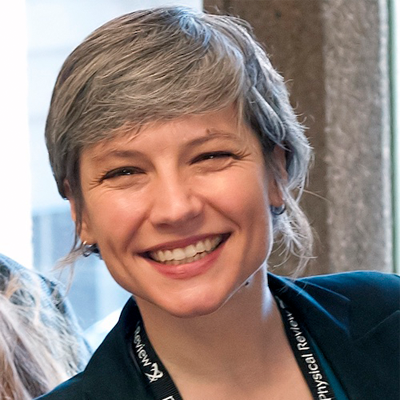 Have a Good Reason to Be There
The primary reasons I went to graduate school were: a) I was good at and enjoyed doing research, and grad school was a good way to continue that, and b) it’s what everyone expected me to do. At no point did I consider whether a Ph.D. in physics was actually necessary for me to achieve a future career goal (believe it or not, I actually wasn’t interested in a permanent career in academia, which of course I (wrongly!) believed was the only thing I could do with a Ph.D.).

As you advance in your education, your goals and priorities will change, but having a “guiding star”—at least one career outcome that you think you might enjoy—which actually requires the degree you’re pursuing will give you resilience in the face of difficulty. When things got tough for me as a graduate student, not actually wanting the career outcome I thought my degree would lead to did nothing to motivate me to stay engaged. You don’t have to stick to your plan, but having some sort of plan—a reason for being there—is hugely important.

Choose Your Advisor Very, Very, Carefully
All of us have heard horror stories about heartless research advisors who seem to be on a mission to make their graduate students miserable. But you don’t have to be working for someone like that to still have a problematic relationship. In my case, my thesis advisor was a great person—there was just a mismatch between his style of management and what I needed in order to be productive and happy. This was a stressor which, combined with my lack of purpose in being in grad school, as well as some technical setbacks in my research, eventually drove me to leave the program (spoiler alert: I did come back and finish the Ph.D. several years later. But not until after having to take my qualifying exams a second time to re-establish my candidacy. Not fun. More about that below).

The truth is, things may have been very different if I had considered talking to my advisor about the issues, or better yet, had sought out a new research advisor—someone who was more hands-on. Students are often very reluctant to seek out new mentorship, especially when they feel that their current advisor has invested years of resources into them. But at the end of the day, it is your life you’re leading, not your advisor’s, and your needs must take priority. Besides, most advisors are genuinely invested in the well-being of their students, and would rather see you be successful with someone who is a good fit than see you continue to struggle in a dysfunctional situation.

If You Leave, Leave FOR Something
My decision to leave the grad program with my Master’s happened abruptly, and without much thought to what I might do instead—I was unhappy and I just wanted out. What happened next was an adventure which I don’t regret, despite the tough consequences it brought for me: I moved to Nova Scotia, played the banjo, and “lived free” for several months. But I was also unemployed for the majority of the time I was there, and had to worry constantly about scraping together enough money for rent and food. It was very disheartening to have an advanced physics degree and not be able to secure a job as a line cook or bartender (I didn’t have any experience), which were the only jobs available where I was living.

Eventually I moved back to the States and reconnected with my passion for teaching physics by filling in as an instructor for undergraduate labs and discussions at my old university. This led me to pursue a Ph.D. in physics with the purpose of going into the field of Physics Education Research (PER). And though this meant retaking the quals—after having already passed them eight years prior—I felt so passionate about this goal that I was willing to tackle anything (if only I had had that level of determination starting out, things would have gone more smoothly for me!). And though I didn’t ultimately end up working in the PER field, in my role at APS I am still engaged in the act of teaching on a daily basis—only instead of Maxwell’s Equations, I’m teaching physics students how to pursue successful careers.

And though I did eventually finish the Ph.D., there would have been loads of great career options available to me with a physics M.S. or B.S., if I had known about them. So if you happen to be considering leaving grad school, my advice is to take the time first to really form an alternate plan before you take the plunge—because that decision can be hard to reverse. Use self-assessment tools to learn about other things which might be a good fit, and conduct informational interviews to get the “inside scoop” on what those careers are like. If you can be as intentional and well-informed about your options as possible, whether you’re entering the workforce with a B.S., M.S. or Ph.D., you have a much higher likelihood of connecting with a career path that truly works for you.

Crystal Bailey is Head of Career Programs at APS. She completed her Ph.D. in nuclear physics in 2009 and has been working on ways to help students broaden their career horizons ever since. You can reach her at bailey@aps.org. This article is reprinted from the APS Forum on Graduate Student Affairs Newsletter (Fall 2017). For more on APS career programs, visit the Careers website.