When archaeologists confirmed their discovery of a hidden burial chamber in an Egyptian pyramid in 2017, it was in some respects the culmination of a project undertaken in the 1960s. A physicist named Luis Walter Alvarez came up with the idea of using cosmic rays to map dense structures like the Great Pyramid of Giza.

Alvarez was born in 1911 in San Francisco. His father and grandfather were both physicians, and his Aunt Mabel was an artist. When his father took a job at the Mayo Clinic, the family relocated to Minnesota for young Luis’s high school years. He attended the University of Chicago, ultimately earning his Ph.D. in physics in 1936. During his graduate studies, he built a cosmic ray telescope out of Geiger counter tubes and used it to determine that primary cosmic rays had a positive charge.

Alvarez’s sister, Gladys, worked as a secretary for Ernest Lawrence, so after getting his Ph.D., he asked if there were any job openings at Lawrence’s laboratory. Lawrence offered him a job, and Alvarez joined the University of California in Berkeley to work with the cyclotron. He designed experiments to study radioactive nuclei, specifically the detection of soft x-rays from a particular type of beta decay that had been predicted but not yet observed.

During World War II, Alvarez joined the newly formed Radiation Laboratory at MIT, where he developed military applications for microwave radar. He worked on several radar projects while there, and is best known for the Ground Controlled Approach (GCA) system, which used a dipole antenna for improved resolution. Even untrained pilots could be guided through a runway landing by ground-based operators using the GCA system. It was still in use in some countries as recently as the 1980s. While testing the GCA in England in the summer of 1943, Alvarez met a young Arthur C. Clarke, then a radar technician with the Royal Air Force, and they struck up a years-long friendship. 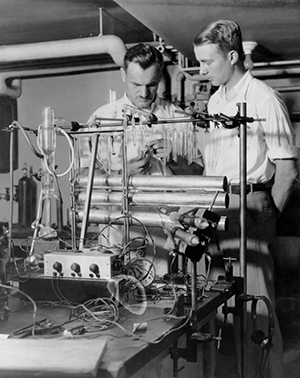 That fall, Alvarez joined the Manhattan Project. One of his first tasks was to find a means of discovering whether the Germans had any nuclear reactors in operation. Alvarez outfitted an airplane with a system capable of detecting the radioactive gases such reactors would produce. Germany didn’t have any reactors at the time, so the mission found no such evidence, but the approach would prove to be extremely useful for intelligence gathering in the post-War era. His final task on the Manhattan Project: designing small instruments to measure the strength of the shock wave from an atomic bomb. He was present at the Trinity Test in 1945 and used his instruments aboard a B-29 to measure the blast energy of the atomic bombs dropped on Hiroshima and Nagasaki.

After the war, Alvarez applied his radar expertise to improve particle accelerators, leading to the construction of the Bevatron in 1954. Alvarez’s contribution was to adapt a bubble chamber so that it could work with liquid hydrogen, the better to image particle interactions. He received the Nobel Prize in Physics in 1968: “For his decisive contributions to elementary particle physics, in particular the discovery of a large number of resonant states, made possible through his development of the technique of using hydrogen bubble chambers and data analysis.”

His earlier cosmic ray research eventually led to his 1965 proposal that one could use muon tomography to hunt for previously undiscovered chambers in Egyptian pyramids. Alvarez and his interdisciplinary team of physicists and archaeologists placed spark chambers in a known chamber beneath the second pyramid of Chephren to detect incoming cosmic rays and measure their deflections as they hit the solid bricks of the structure. The muons would pass right through a chamber, however, registering a void in the resulting image.

The Arab-Israeli Six Day War of 1967 interrupted the experiment briefly, but things resumed soon after, and Alvarez’s team continued taking cosmic ray data for the next two years. At a 1969 APS meeting, Alvarez reported that they had successfully surveyed about 19 percent of the pyramid, but had found no hidden chambers. He and his colleagues also published a paper in Science to that effect in February 1970.

Alvarez’s natural curiosity often took him well outside the physics laboratory. When Life magazine published photographs in 1966 of President John F. Kennedy’s assassination, Alvarez applied his expertise in optics and photo-analysis to the images. His conclusions, outlined in an informal tutorial paper, went against many of the conspiracy theories circulating at the time. For instance, he found that the backward snap of Kennedy’s head is what would happen with a shot from behind and pointed out several errors or omissions in the FBI’s official analysis.

Alvarez’s son, Walter, became a geologist, and became intrigued by a thin layer of clay in the strata of a limestone gorge in central Italy—marking the point where the dinosaurs went extinct, right at the Cretaceous-Paleogene boundary. Alvarez and his son collaborated with nuclear chemists at LBL on a controversial 1980 paper suggesting an extraterrestrial cause, such as an asteroid, for that extinction event.

Geologists were sharply critical, but subsequent analysis of the clay showed that it contained shocked quartz crystals, tiny diamonds, and rare minerals that only form under high pressure and temperatures. Ten years after Alvarez died, scientists discovered the Chicxulub impact crater off the coast of Mexico, lending even more support to the theory. By 2010, scientists had largely reached a consensus that this asteroid impact did indeed trigger the mass extinction that wiped out the dinosaurs.

Alvarez died in 1988 from complications of surgery for esophageal cancer. But his legacy in pioneering cosmic ray imaging techniques continues to bear fruit. In addition to Egyptian pyramids, cosmic rays have been used to map lava channels in volcanoes (like Mount Vesuvius) and on other archaeological sites, and to probe the structure of Brunelleschi’s dome in Florence, Italy.

Wohl, C.G.,“Scientist as detective: Luis Alvarez and the pyramid burial chambers, the JFK assassination, and the end of the dinosaurs,” American Journal of Physics 75, 968 (2007).