Toast with Jam and Quantum Mechanics

APS member Chad Orzel is a professor of physics at Union College in Schenectady, New York. But he is also a blogger for Forbes magazine, a sought-after lecturer, and author of four popular books on science. In two of his previous books, Orzel shared his excitement about quantum physics and relativity through “conversations” with his dog Emmy. APS News spoke with Orzel about his latest book, Breakfast with Einstein, a tour through the physics of everyday things. The interview, available in full online, has been edited for length and clarity.

APS News: Your previous books used this device of explaining physics to your dog. How did you approach this book?

I didn't want to do the talking dog thing again. The sad reason is she died a couple of years ago, but I also don't want to get typecast and how much more can I wring out of talking to the dog? In communicating physics there's a big emphasis on things that are extremely exotic, right? There are lots of books about what's going on near the event horizon of a black hole or what's going on inside the Large Hadron Collider. And it leaves people with this impression that fundamental physics, quantum physics, particle physics are things that only matter in these really extreme environments that have nothing to do with everyday life. 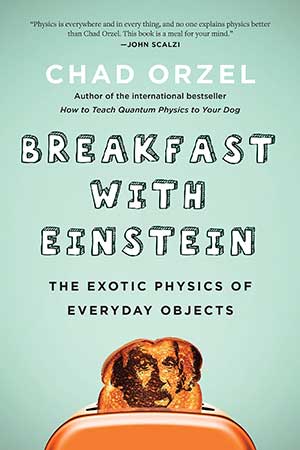 This is to some extent self-inflicted. For those us who write popular books, that's the attention-grabbing stuff and we sort of gravitate to that. But it also distances the subject and allows the reader to turn it off. I realized, and it literally occurred to me while toasting bread, that if you look at the heating element in a toaster oven or an electric stove, it glows red and explaining why hot things glow a particular color is what kicked off quantum physics. That's the black body radiation problem and you can’t solve it without quantizing the energy. And then I started trying to think of other aspects of ordinary everyday life where quantum things show up.

So, what do I do in the morning? I go check the internet and see what happened. You can't have the internet without fiber optics; you need lasers to make that work. Lasers are something you wouldn't conceive of without quantum physics. And what am I getting on the Internet? I'm getting photos of people's cats and kids on other continents. And those photos you take with a digital camera—the principle at work there is photoelectric interactions. And it all ends up tying back to quantum physics. My goal is to take really concrete things that you experience in the morning perhaps, and then use that as a jumping off point.

APS News: How did you decide which topics to pick for each chapter? It was a mix of stuff. I did a blog post around the same time about the Sun, so there is a chapter about how the Sun relies on all of the fundamental interactions. And quantum tunneling. Say you throw two protons at each other at the temperature that you have in the core of the sun. That's not nearly enough energy to get them close enough for fusion, but there's a tiny chance that a tunneling reaction can occur and allow fusion to happen. The sun wouldn't work without quantum physics. I moved from that to talking about smoke detectors. People aren't aware that commercial smoke detectors generally have a tiny bit of americium in there, that the alpha decay of that is part of a sensor that picks up certain kinds of fires. If you open it up, you see the little radioactive sticker. It works because an alpha particle is tunneling out of the nucleus.

APS News: The explanations that you have are non-mathematical in many cases and are nice concrete explanations for a particular phenomenon. You must have had to make tough decisions about how much detail to put in.

In one chapter I talk about how chemistry comes from the Pauli exclusion principle and, in anything biological, you have these organic molecules. Their structures trace back to the electron shells, which are filled the way they are because of Pauli exclusion. It becomes really difficult to avoid falling down a giant rabbit hole of organic chemistry stuff that I don't know very well. So, I tried to keep the detail in that kind of thing to a minimum.

There are certainly places where I've probably simplified too much for people who work on that side of physics or chemistry. But that's not the purpose of the book—it’s not a textbook. For example, writing about permanent magnets was really hard. And that chapter is the one where I had to learn the most stuff that didn't make it into the book because it's just a ridiculously complicated process. But magnetism always gets science writers in trouble.

APS News: Some scientists say they don't get credit for the science communication that they do, that the whole reward system in academia and other places is still geared toward how many papers you publish. Do you fight against that?

I don't have a great read on how things are perceived. There are internal merit systems and I don't know how highly that part of the institution regards the books that I published because I also publish papers and scientific review articles. When I sold the first book, I had some really weird conversations with people: “I have a contract to write a book.” “Oh really? What university press is it with?” “Um, Scribner? It’s an imprint of Simon and Schuster.” “Oh, where would I get a copy of that?” “Your local bookstore?” I checked—it's on the shelf at the local big box.

I mean, it never is black and white, but you're not getting actively dissuaded from doing it. I don't know if selling a book that's going to end up in Barnes and Noble carries the same weight as getting a contract for a book that's going to be bought by 100 university libraries and nobody else. The quantum book [How to Teach Quantum Physics to your Dog] has done really, really well over the years. It didn't explode publication-wise, but it has sold steadily since it came out. And that’s almost 10 years ago.

Breakfast with Einstein by Chad Orzel, published by BenBella Books, is available December 2018.