Physicists in Lebanon: Passion and Talent Striving to Overcome Adversity

Growing up in Lebanon, engineer and materials scientist Hussein Zbib would challenge other youngsters to a game of stick ball and algebra. If you solve for X, you win the game. The harder the problem, the more joy he and his classmates felt. “This excitement about the sciences and mathematics has always been there,” says Zbib, a professor in the School of Mechanical and Materials Engineering at Washington State University in Pullman. “The country has always been engaged in science.”

In a nation of only six million people, there are over 30 universities but only a handful of physicists and less than five physics departments that offer degrees in the subject. In an October 2006 APS News article, Bassem Sabra, APS member and physics professor at Notre Dame University-Louaize in Beirut, wrote that there were about 500 physicists in the country, including 100 professors and 400 students. More than 10 years later, Sabra notes that the numbers have remained fairly constant, with some changes. There are more graduate programs in physics, more physics disciplines being taught, and more research. “Some people outside of Lebanon might not think there is physics here,” says Sabra. “What has changed is that the human capacity has increased a lot. We are producing more Ph.D. students.” There is also more collaboration with institutions beyond Lebanese borders, which have led to fruitful innovations and advancements in knowledge.

For the small but committed group of physicists who reside in Lebanon, their dedication to the field is paralleled by their strength in adversity. “Doing physics or science in Lebanon requires a lot of grit,” explains Sabra. “You have to want it ... Research is difficult in itself, but here you have other barriers, such as a lack of adequate funding.” 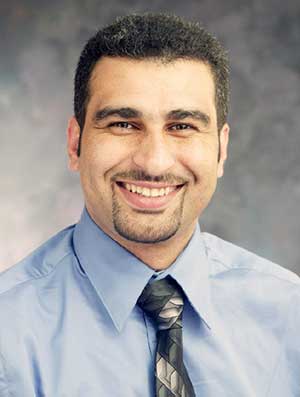 And there are other challenges. Lebanese physicists describe an electrical grid that goes out in the middle of an experiment; when it will turn back on is anyone’s guess. Telecoms has its troubles too. When Maher Dayeh of the Southwest Research Institute in San Antonio, Texas, participated in an APS exchange program with other Lebanese physicists, he had to drive one hour back to Beirut from his residence outside the city, if he wanted fast internet. “You can call the company and they don’t do anything,” he says. “The phone lines need to be replaced—they’ve been saying this for five years.”

Physics professors at public institutions are civil servants—“they have to do research and publish in order to get promoted,” notes Sabra. Teaching loads tend to be on the high side. And the professorships, no matter the type of university, are highly competitive.

But because there are so few positions for physics professors, pursuing a career is tough and as a result, many physics students go abroad to further their education and gain an advantage should they want to return to Lebanon. Physicist Amara El-Sayegh is currently pursuing an unpaid postdoc at the American University of Beirut (AUB) while serving as a lecturer at this university and others nearby. “At AUB it’s very hard to get a job so I need a postdoc experience abroad,” she says. “It’s very competitive so people are required to do research abroad…It is a hard thing to do because there are not a lot of opportunities for physicists. There is no encouraging environment for research.”

“If you do research [in Lebanon] you do it for the love of it,” says Dayeh. “If you are not excited about knowing about the nature of matter, you can sit back and in most cases still have your job. Those who do research are really excited about it, and they want to find new solutions to problems and better understand the universe. This tells you that if there were more funding and infrastructure stability, they would be able to do more!”

Interestingly, physics research is done almost exclusively at universities, says Jihad Touma, professor of physics at AUB. “There is to be sure hardly any research done by industry for industry; research is conducted in universities but also in the Lebanese National Council for Scientific Research," he notes. "Applied physics research is conducted with technological applications in mind, but the absence of any related industrial sector in the country makes for little or no immediate convergence to the foreseen applications."

And there’s war. “The lack of resources for scientists and engineers has been a hindrance. Resources are wasted because of war,” says Zbib. “It’s not that the country doesn’t have resources, it’s that the resources are being used somewhere else.” And that includes human resources: “With the war things fell apart. The main people I looked up to had left in the war,” says George Helou, research professor of physics at the California Institute of Technology.

“The infrastructure is a challenge—the power grid, internet access, internet speed, all of this. It’s a real problem and it holds back not just research but the economy as a whole,” says Helou. “It is remarkable that any activity can be achieved in that environment but people are resilient and keep going! I have a great admiration for the physicists who have a go at it and they do make a difference in making connections to the international community.”

Despite its challenges, this is an exciting time for physics in Lebanon. The Lebanese Academy of Sciences, known officially by its French name, the Académie des Sciences du Liban (ASL), is an independent and nonprofit institution founded by a decree from the Lebanese Government in 2007. It is modeled on the French Academy of Science.

“The ASL is an independent entity from the government,” notes Zbib, “but acts as a catalyst for science, scientists, and engineers.” Indeed, Helou, who served as President of ASL from 2014 to 2018, shares that much of the ASL’s strategic plan concerns increasing its visibility within the Lebanese federal government to provide scientific insight for national programs. He and his ASL colleagues are facilitating targeted studies and study groups that look at how to deal with diverse issues of national concern, ranging from environmental issues, such as toxic waste removal and sustainable energy, to public health, to education and even tourism.

“The government has also asked us for advice about setting up a planetarium in the country as a science tourism and an educational tool,” says Helou. “All of these are the kinds of issues the country has to deal with it and we believe that we could provide technical insight.” Currently, ASL has approximately 30 members, all of whom are volunteering their time and efforts towards these undertakings.

In 2016, APS and the ASL, in a joint effort led by Zbib and Helou, launched the US-Lebanon Professorship/Lectureship Program, which supports scientists wishing to visit overseas to deliver a short course or a physics lecture series at a university. The first participants were Dayeh, who conducted a series of lectures on magnetic reconnection at AUB in October 2016, and Touma, who presented the Dix Planetary Science seminar at Caltech and a lecture at the Galactic Center group at UCLA on topics in planetary and galactic dynamics.

“We decided to begin modestly, because we all wanted a program that was of equal partnership, meaning we each would provide one travel award each year,” says Amy Flatten, Director of International Affairs for APS. “We felt an equal partnership was the most appropriate. Even with fewer awards, it will help to build a baseline of contacts with the Lebanese physics community that we hope will expand and strengthen our connections to this physics community.”

The program is modeled after other successful APS international endeavors with nations such as Brazil and India. “We appreciate the connections to some of the leaders in the region through the Lebanese Academy of Sciences and the chance to convey that APS is interested in working and collaborating with that community,” says Flatten. “APS wants to strengthen its connections with the physics community in Lebanon and more broadly the Middle East.”

To increase APS service to its international members and physicists worldwide, CEO Kate Kirby established the Task Force on Expanding International Engagement. The Task Force, composed of 13 senior physicists representing diverse physics fields and all parts of the world, has undertaken an extensive outreach to all parts of the Society, as well as its international partners. It gave its final report and recommendations to the APS Council of Representatives in November 2018.

Although Zbib left Lebanon 40 years ago to study at Michigan Technological University, he has always stayed connected. He served on the APS Committee on International Scientific Affairs and was one of the architects of the U.S.-Lebanon Professorship/Lectureship Program, which he views as an invaluable first step in advancing cross-national partnerships. One especially relevant issue: “There are more Lebanese scientists outside Lebanon than in Lebanon,” he notes. “There is much more scientific involvement outside Lebanon. I see a lot of students from AUB go to the US, and students from other Lebanese universities going to French-speaking countries.”

Lebanese physicists recognize that they are in a unique position. “The country is filled with contradictions,” says Touma. Despite challenges of infrastructure and war, Lebanese physics students garner top positions in grad programs and postdocs around the world, and Lebanese physics researchers regularly achieve results on the cutting edge of the discipline. “These are reasonable expectations [in a typical setting],” he adds. “What is unreasonable is that we are able to produce such excellence under these conditions. I’m proud to be associated with this bunch.”