Quantum information research has become a hot topic in physics circles, but physicists aren’t the only ones to see its potential. Recent movements to prioritize research into quantum technologies by international players, like China, Europe, and Canada, has spurred a response from US lawmakers in the form of the National Quantum Initiative Act (NQI).

The House and the Senate have recently introduced bills to create the NQI, a 10-year commitment to advancing quantum information research in the United States. Putting such a long-term program onto the front burner comes with a hefty price tag for developing experimental technology into powerful tools that can impact the economy, industry, and national security. 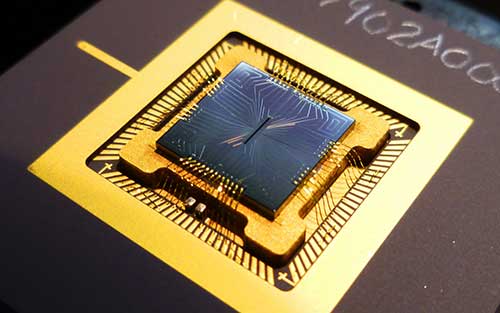 Ions trapped in devices such as this offer a route to quantum computation.

Quantum information research has already become a top priority for government agencies like the US Department of Energy and the National Science Foundation, but the passage of NQI will continue to emphasize the importance of these new technologies. In September, the House of Representatives passed their version of the bill—a version that has been heavily influenced by grassroots efforts by stakeholders from academia and industry.

The initial draft NQI bill established the framework, but without providing any additional funding—all funds would come at the expense of other research programs. Improvements to the bill that restore new funding have since been made, thanks to efforts of the quantum science community through the National Photonics Initiative, the Optical Society, SPIE, and APS.

For its part, the APS approach involved direct member grassroots interaction with Congress. “A lot of our work and a lot of our success comes from working with APS members in order to change this bill,” says Francis Slakey, APS Chief Government Affairs Officer. “In this case, it was two APS members who walked into offices in their states and asked direct questions to get the language that we wanted included in the bill.”

Several scientific organizations have been urging the US government to embrace quantum technology. But why devote so many resources to a new type of computing instead of using resources to beef up our classical computing capabilities?

“Quantum computing is often misconstrued as being just the next generation of computers that we use, but it’s more fundamental than that,” says Christopher Monroe, co-founder of IonQ, a quantum computing start-up company. Monroe is also a professor at the University of Maryland, part of a community which he says has more people doing quantum research than anywhere else in the country. “Quantum computers offer the potential for solving problems, that are not only harder than what we can currently do, but problems that could never be solved otherwise.”

The kinds of problems that could be solved with quantum information processing tend to deal with a large number of configurations—so large that traditional computers don’t have the capacity to process them—like factoring a very large number or searching a huge database. Increased computing power afforded by quantum mechanics comes from quantum bits—the qubits. Regular bits—the fundamental processing units of computers—can only exist in one state at a time, either as a zero or a one, in order to represent numbers. Qubits, on the other hand, can exist as both zero and one at the same time, a condition known as superposition.

“This is what people stay up late at night thinking about: What does it mean to be in two states at the same time?” says Monroe. This question is difficult to answer thanks to another quantum quirk: the system only works as long as it isn’t observed.

While the exact details of how qubits behave may be difficult to understand, the usefulness of their bizarre behaviors is apparent: for every qubit that’s linked together to form a quantum computer, there’s an exponential increase in the number of possible configurations and therefore an increase in parallel computations. The connections between multiple qubits are made without actual, physical wires, thanks to the concept of entanglement, which gives quantum computers their power. The point at which quantum computing can outrun conventional technology is being called “quantum supremacy.”

“If you have two qubits there are four possible states, for three there’s eight,” says Monroe. “If we have 300 qubits—I think we’re several years from having control of 300 qubits—that’s two to the 300, which is more than the number of particles in our universe.”

Harnessing the power of quantum computing could have all kinds of practical uses, which draws the interest of government agencies, like the National Science Foundation, the National Institute of Standards and Technology, and even the National Security Agency. Quantum information processing may be ideally suited for optimization challenges such as the traveling salesman problem: What’s the shortest path connecting hundreds of cities on a map?

“This is a classic, really hard math problem—it’s a classic logistics problem that companies like Fedex and UPS are very interested in,” says Monroe. “For a sufficiently large number of cities, it can’t be solved.”

The same kinds of computations can also be applied to materials science to model binding energy of molecules by calculating the many possible configurations.

“Quantum computing is a potential way to attack certain problems, but things are in the infant stage,” says Monroe. “We don’t have the technology to do some of these things yet, but there are paths to getting there.”

One of quantum computing’s biggest potential uses, and a critical issue for driving government investment in the field, is in code-breaking. This means that quantum research becomes a national security issue.

“A lot of times we start from scratch when persuading people to invest in one area or the other—we hear people ask ‘do we really need to be number one in this?’’ says Mark Elsesser, Manager of Science Policy at APS. “But when it comes to things that have to do with national security—like quantum computing—in those areas we can’t afford not to be number one.”

Quantum information science as both part of national security and a future stimulus for the economy has become a priority in the White House, both during the Obama Administration and continuing in the Trump Administration: In June, the Office of Science and Technology Policy created a new subcommittee, led by NIST physicist Jacob Taylor (see APS News, February 2018), to coordinate the national agenda on quantum research.

The stimulus for government support of NQI comes from concerns about falling behind other countries in quantum research, especially China, which just devoted $10 billion to build a new quantum computing center. Canada and parts of Europe are in on the race, too, but the hope is that NQI will keep the US ahead by allowing research into different quantum technologies.

“In some places, like parts of Europe for example, they’ve picked what they think is going to be the winning technology and they’re heavily investing in that area,” says Elsesser. “The US is still at the point where we can invest in a broad portfolio of technologies because we don’t know what the winner is going to be.”

Monroe’s research and his work at IonQ represent one of the possible quantum technologies: Most of the larger companies on the hunt for quantum supremacy, like IBM and Google, use superconducting wires to make qubits, but Monroe uses individual atoms. The atoms, which are floating in space in a vacuum chamber and held in place with lasers, make great qubits since they’re completely identical—there’s less room for mistakes with fabrication—and they’re much easier to manipulate than traditional qubits made from superconducting materials.

“A superconducting system is like a conventional chip—you have a bunch of things that are wired together and send signals back and forth,” says Monroe. “We don’t have any wires—we can reconfigure the system in very flexible ways. We don’t know exactly what quantum computers will ultimately be useful for, but with a reconfigurable architecture like trapped atomic ions, when someone finds a good use, we will be able to program their application no matter what it is.”

In an emerging field like quantum information science that still has many unknowns, both about how the process works and what it can be used for, there’s room for even more new ideas.

“We need a marketplace of companies playing with new ideas and designing new systems,” says Monroe. “At places like Boeing and Facebook—they should know quantum physics, they will need it for the future, but there’s the problem: Industrial engineers are not generally comfortable with quantum physics, and that’s a workforce issue.”

Part of the NQI legislation aims to address this workforce gap, encouraging bright scientific minds to venture into quantum mechanics—a field that, according to Monroe, isn’t just for physicists anymore, as software developers and other “non-quantum people” join in on the research and turn it into useful devices.