The Industrial Internet of Things is Upon Us

In manufacturing, oil refining, and other industries around the world, a new approach to solving problems and leveraging data is changing the way we make business decisions. The Industrial Internet of Things (IIoT) combines smart gadgets and data collection on grand scales. You’ve heard of smart refrigerators, smart cars, and smart homes—now imagine a smart power plant, where hundreds of thousands of sensors take data across the entire system, and software, driven by machine learning (ML) and artificial intelligence (AI), provides intelligent information to workers, allowing them to make the right operating choices.

This is the realm of Josh Bloom, a physics professor at the University of California, Berkeley, who also serves as vice president of data and analytics at GE Digital. The former astrophysicist started his career examining gamma-ray bursts, the brightest explosions in the cosmos. But when he realized that an explosion of astro data was imminent, he gravitated toward data science. The problems he was trying to solve in understanding the origin of the universe had relevance for industry as well. 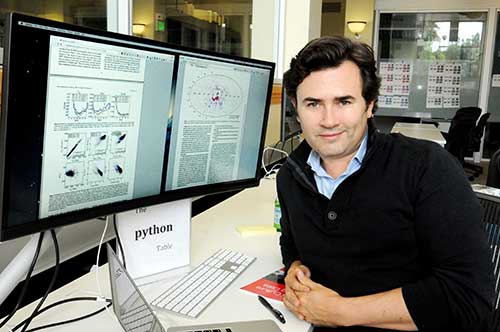 As a new faculty member in Berkeley’s astronomy department in 2005, Bloom started thinking about “the massive data influx expected in the coming decade,” he recalls. With advances in observatories, hardware, and computing power, “We knew there was going to be a big data problem in astronomy—there was going to be a bottleneck.” That bottleneck would be finding out what lay hidden within the vast data and what researchers could do with the information.

Bloom recognized that his greatest asset was his access to experts at Berkeley. So he began giving talks in departments across campus to cultivate ideas from this interdisciplinary nexus. Conversations led to collaborations, and he began to hire computer scientists and engineers into his group. “At this point there was little to no machine learning in astronomy,” he describes. “There was the romantic view of astronomy, that you look through the telescope and decide what to do next. We were one of the first groups to augment or replace the human-driven work flows around the data.”

Soon he wanted to build systems that not only collected and analyzed data but also provided insight and suggested actions for smart decision-making. He was surprised to learn that this need was not being fulfilled by existing companies or start-ups. “I stumbled into the critical aspect of ML in industry,” he says. “It wasn’t inventing new [algorithms] to do ML, but building a system that can run at scale, that can handle huge amounts of data [in] a privacy-preserving environment.”

Collaborations led to creation of a company called Wise.io. Leveraging the team’s extensive machine-learning expertise as well as a deep knowledge of customer support processes, its first products captured the decision making of agents on the front lines of customer support. When someone emails a technical support line with a simple query, the software could mimic a live agent to answer basic questions. But if the customer needed a real person due to the complexity of the problem, the software would make that decision and suggest possible resolutions to human representatives. “It freed people to do what they do best—be empathetic and solve the hardest problems for their most important customers,” says Bloom. One of their first clients was Groupon.

Wise.io caught the attention of GE Digital, which was looking to expand its reach into data science and ML, especially in heavy industry and industrial infrastructure. In 2016, GE Digital acquired the firm, and Bloom became a GE vice president. Today, his focus at GE is on building ML applications to provide unique value in industry, particularly as it relates to the IIoT.

Bloom’s team has been making an impact in the oil and gas sector, where inspection robots are typically deployed inside remote pipelines to help assess pipeline health and identify potential issues. The machine-learning application that Bloom’s team developed with GE oil and gas experts allows the company’s analysts to home in on problem areas more quickly. “We are not replacing the analysts who have decades of experience looking at these images,” he says. “We are trying to find the ‘easy’ problems to solve to allow the analysts to focus on the grey areas.”

Where ML and AI can really make a difference is in large-scale systems such as the IIoT. Smart grids, smart locomotives, and smart factories generate an enormous amount of data, and with an estimated 50 billion connected devices by 2020, Bloom notes. Much of the data coming from the devices are not useful or has, at best, low signal-to-noise. “One of the big challenges is pulling out the right information at the right time that is actionable to users … . This is a problem with human operators—they have too much data to digest.” That ocean of IIoT data must be boiled down to something a human can work with.

Physics plays a key role in building and maintaining a successful IIoT. First and foremost, the systems that Bloom models are large-scale and extremely complex, so he is able to borrow from astrophysics to take both a holistic and granular view of the problem at hand. Moreover, the data are collected by physical devices with particular response characteristics. How a sensor in a pipeline will collect data depends on the temperature and pressure changes, vibrations, and other physical stimuli. “We must understand the underlying physics of these objects,” he says. “Indeed a physical understanding of a device—through first principles and computer modelling-—provides a natural path to predict faults and detect when something has already gone wrong.”

And yet, “We can’t put all the relevant physics of these objects into our models because we don’t understand all the physics yet or it’s simply too expensive to do so,” he says. For example, while we know a lot about metallurgy, we might not fully understand the geological forces acting on a pipe underneath the ground. But therein lies the both the conundrum and the supreme opportunity for the IIoT. “This is where the data-driven and physics-driven models operate very powerfully. A physics-based model might get us 90% of the way there to a good prediction and, by layering in sensors, a data-driven machine-learned model might get us the rest of the way.”

But Bloom cautions that getting a better answer also requires acceptance. “What’s going to happen in the future is a little uncomfortable for some people,” he says. “We need our data-driven models to be just as explainable as physical models are—this is a huge challenge and one of the frontiers of machine learning.”