Announcing the Millie Dresselhaus Fund for Science and Society

This Fund will support the Dresselhaus Prize, the first APS prize named in honor of a woman, and the Dresselhaus Keynote Lecture, which will provide opportunities and mini-grants to undergraduate women in physics. For more information on how to participate, please contact Irene Lukoff, APS Director of Development at (301) 209-3224 or lukoff@aps.org. Online gifts can be made at the Dresselhaus Support page. On the occasion of the fund launch, the following article has been excerpted from Physics Today (July 1985).

Perspectives on the Presidency of the American Physical Society

It may seem surprising that the most frequent question I was asked during the year I served as president of the American Physical Society was “how it felt” to be president of this distinguished and venerable society. This question is perhaps not so surprising when you consider that the probability for a physicist to experience personally this challenge is only on the order of one chance in a thousand. In this article, I will attempt to give one operational answer to this complex question.

I must admit that I was caught completely by surprise when the chairman of the APS nominating committee called to ask if I would run for vice-president of APS. I could hardly believe that I was a serious candidate. 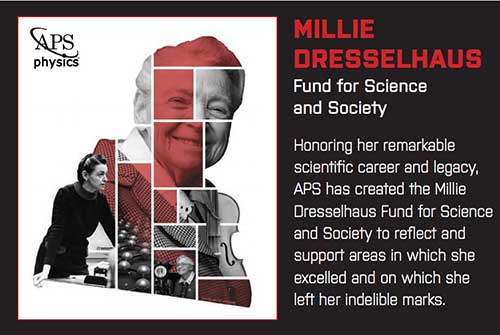 After consulting my family, my boss, my colleagues, and a few close friends, I concluded that while I didn’t have much of a chance to win the election, this would be a fine opportunity to voice some of my priorities for APS, for physics, and for physicists. My boss at MIT assured me that the most valuable contribution that MIT could make to women in science was for me to take this proposition seriously. He did not, however, take my nomination seriously enough to factor the possibility of my election into my work assignments for the coming years.

With these words of encouragement, I accepted the nomination and proceeded to prepare an upbeat, liberal platform aimed at young physicists and industrial physicists. I called for increased participation of the younger, more active physicists in the leadership of APS; I supported increased APS sponsorship of studies on technical issues of national concern; and I said APS should work to increase the scientific literacy of the general public, so that citizens can better make decisions on issues that involve the interface between science and society. My husband and close friends liked my platform, but thought it was too radical for winning the election. This assessment turned out to be wrong. I honestly believe that I won the election because of my activist platform. … Luckily, the forefathers of APS, in their wisdom, framed the organization’s constitution to give the president a two-year apprenticeship prior to inauguration. For me, those two years as vice-president and president-elect were absolutely essential, because there was so much to learn about ongoing APS programs, committee activities and people who carry out the work of the Society. Thus, upon election, I plunged into the work of APS with much enthusiasm and dedication. My life has not been the same since my election to the APS presidential line.

To be sure, serving the society has involved a lot of hard work, but the personal rewards have also been tremendous. First, it has been a marvelous experience to work with so many distinguished physicists and thoughtful people. But more than that, being exposed to such a wide variety of physics has been truly enriching, something like going back to graduate school.

Now that my year as APS president has ended, it is refreshing to look back at the progress that was made. It is, however, difficult to assess at this early time the impact of the initiatives that are taking APS in new directions. Future presidents will support the best programs, and the weaker programs will die. The presidency of APS truly presents a window of opportunity. However, future generations must assess the significance of each president’s accomplishments.