2018 APS April Meeting, Columbus, Ohio—This May, U.S. President Donald Trump’s administration was slated to publish its Missile Defense Review, proposing future strategies to protect the country from potential missile threats. As of press time, the document has not yet appeared. But likely it will argue for expanding current systems and developing new, potentially space-based technologies for missile defense, said physicist Laura Grego, of the Union of Concerned Scientists, at a press conference at the APS April Meeting.

The intent is to keep the country safe. But a beefed-up defense system can also easily become an offensive weapon, with unintended consequences that policy makers gloss over, she says. Grego emphasizes one danger in particular: these missile defense systems have the capability to destroy satellites. “If you make a good missile defense system, you are also making a good antisatellite weapon,” says Grego. “You can’t help it. They just do the same kind of thing.”

Current missile defense systems—some based on land, some on ships—launch projectiles into the air to hit incoming offensive missiles. But some of these projectiles can reach altitudes higher than 2,000 kilometers—beyond low Earth orbit (LEO), where some 1,000 satellites reside.

Eighty percent of those LEO satellites belong to the U.S. So by developing a robust missile defense system, the U.S. is also creating a technology that disproportionately threatens its own satellites, Grego noted. It’s actually easier to knock a satellite down than a missile loaded with nukes: satellites travel in known orbits, so attacks can be planned in advance. 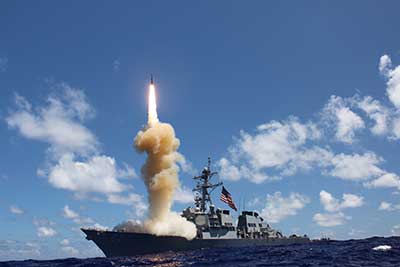 The U.S. government has already used missile defense technology to blow up a satellite, one of its own. In 2008, the Pentagon converted a defensive missile to shoot down a non-functioning military satellite in a mission known as Operation Burnt Frost. “It only took a few days of reprogramming to make that missile capable of hitting the satellite,” says Todd Harrison, an aerospace security expert at the Center for Strategic and International Studies, a bipartisan think tank.

However, Harrison says that other countries shouldn’t worry that the U.S. will turn its missile defense systems on their satellites. For one thing, these collision-based methods create lots of debris that damage other spacecraft. According to Grego, destruction of a single 10-ton satellite could double the amount of large debris in LEO. “We have more to lose in space than anyone else,” says Harrison. “Why would we want to be polluting it with all kinds of debris?”

But conversely, Harrison says, the U.S. does need to keep an eye on other countries with antisatellite capability, such as Russia and China. Russia’s missile defense system can also shoot down LEO satellites. In 2007, China shot down one of its weather satellites as a demonstration. Debris from that test collided with a Russian spacecraft in 2013, altering its orbit.

Grego says that antisatellite weaponry threatens more than just the satellites themselves: it also erodes political norms about space as a peaceful domain. Although countries have always used space for military advantage—launching satellites for military surveillance or “jamming” an adversarial country’s communications—so far, countries have avoided aggressive conflict in space. More than 100 countries, including the U.S., have signed the Outer Space Treaty of 1967, which prohibits weapons of mass destruction in space, while declaring that space should be used for peaceful purposes.

However, in recent years, the U.S. government has shown a “shift in thinking,” says Grego, as space real estate becomes more crowded. In a March speech, President Trump referred to space as “a war-fighting domain just like the land, air, and sea,” and proposed a new branch of the military, a Space Force.

The development of antisatellite weaponry furthers the possibility of space-based conflict. “If we’re not careful, we may lose options for keeping space secure for the benefit of all people,” said Grego at the press conference.

In addition to its threat to outer space, the current U.S. missile defense system isn’t entirely effective at stopping missiles, either. It has passed tests only half of the time, under idealized conditions, says Grego.

Some lawmakers, such as Senator Ted Cruz (R-TX), have expressed support for building a missile defense system in space, a recurring idea since the Reagan administration proposed “Star Wars”—the Strategic Defense Initiative—in the 1980s.

In theory, these systems could target missiles as they are launching, as opposed to when they are cruising. Missiles in boost phase would be easier to hit, as they would be moving more slowly. They are also less likely to have deployed decoy targets to fool interceptors. However, for a space-based missile defense system to be effective, the system would need to cover vast swaths of the planet at once, which would be too expensive, says Harrison. For example, to defend against North Korean missiles, the system would need the ability to launch an interceptor at the country within minutes at all times of day.

“The biggest misconception is that space-based interceptors are a viable option for protection,” says Harrison. “They’re just not. The physics doesn’t work, and it doesn’t scale.” Yet last year, Congress authorized the Pentagon to develop a space-based missile defense system.

Ultimately, the only foolproof method of blocking a missile attack is to avoid conflict in the first place, says Grego. To her, the policy makers’ overall strategy for missile defense—building new technology—points to a bias against diplomatic solutions. “There’s a real impulse to solve things unilaterally with technology,” she says.