For the eleventh year in a row, every member of the United States Physics Team has medaled at the International Physics Olympiad (IPhO). This year, five high school students representing the United States traveled to Lisbon, Portugal, from July 21 to 29 and brought home three gold and two silver medals, finishing seventh out of 60 countries.

Every year, 20 of the nation’s best and brightest high school physics students make the trip to the University of Maryland for a grueling—and rewarding—physics boot camp. These exceptional students make up the U.S. Physics Team, and five of them were selected, based on performance on exams at the end of the training camp and their compatibility as a cohesive group to compete in the 49th IPhO.

On May 27, this year’s twenty students arrived at the University of Maryland, which became their headquarters for physics instruction, discussion, and experimentation for the next ten days. Despite coming from different states and schools, and ranging from freshmen to seniors, the team quickly bonded around their love of physics. 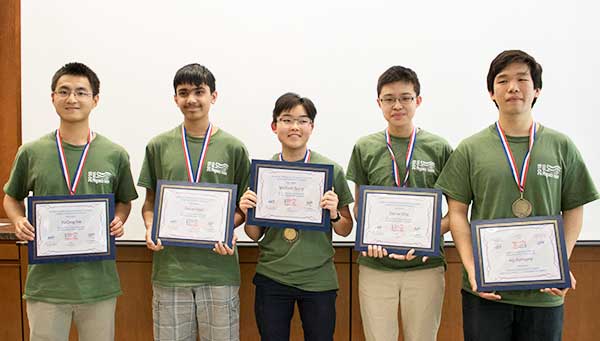 Michelle Song shared her experience from last year’s camp in her biography this year. “I had always thought I’d be too tired after a day of lectures and exams to continue talking about physics over the dinner table, but Physics Camp last year proved me wrong,” wrote Song. “I never knew a bunch of nerds could be this down-to-earth and cohesive.” Song competed at the IPhO last year and is a now a two-time silver medalist.

Since 1986 the American Association of Physics Teachers (AAPT) has been responsible for recruiting, selecting, and training the team of high school students to compete against 60 other countries at IPhO.

To create talented teams, AAPT scours the nation for high school physics students with the potential to compete at an international level. In mid-January the search for team members begins with two exams administered to high school students at schools all over the country. Top performers qualify for a spot on the U.S. Physics Team, and get their tickets punched to physics training camp. “These kids come here rough around the edges, but we help polish them up,” said Paul Stanley, who has served as the team’s academic director for the past 16 years.

The U.S. Physics team is made possible by the support of AAPT, sponsorship from APS, the American Institute of Physics, and other physics organizations, and the dedication of bright physics students and enthusiastic coaches.