August 15, 1934: World-Record Dive in the Bathysphere by Barton and Beebe

In 1986, a deep-ocean submersible vessel dubbed Alvin made international headlines when it carried explorer Robert Ballard and two others to the wreckage of the RMS Titanic, which sank in 1912. Its design was based on pioneering deep-sea dives in the 1930s by William Charles Beebe and Otis Barton in a spherical vessel known as the “bathysphere.”

Born in Brooklyn, New York to a newspaper executive, Beebe had a strong interest in collecting animal specimens, even teaching himself the art of taxidermy as a high school student. An avid amateur ornithologist, he published his first article in Harper’s Young People while still in high school, about a bird known as a “brown creeper.” He attended Columbia University, but left without earning a degree to work at the just-opened New York Zoological Park, where he cared for the birds and rose quickly to become a full curator. (Both Tufts and Colgate University later awarded him honorary doctorates.) Beebe also persuaded some of his professors to sponsor expeditions to Nova Scotia to photograph birds and other animals there and to collect specimens. There he picked up the practice of dredging, using nets to haul up organisms that thrived deep underwater.

In 1928, Beebe received permission from the British government to set up a research station in Bermuda to study the marine life in the region. He soon realized that for dredging and diving to observe deep sea animals in their native habitat, a special underwater helmet would not be sufficient. Helmets were safe to only a few hundred feet down, and though submarines had descended to 383 feet, they had no windows to permit observation. Beebe wanted to build a deep-sea vessel with observational windows, capable of descending to even greater depths. His early designs for a cylindrical vessel appeared in The New York Times and caught the attention of an engineer named Otis Barton, who also dreamed of going deep-sea diving.

Barton’s initial letters to Beebe went unanswered, largely because the latter received so much correspondence from obvious cranks. But eventually a mutual friend introduced them, and Barton presented his own design in person: a spherical shape, the better to withstand the immense pressures of the deep, with openings for three thick windows made of fused quartz. They agreed that Barton would cover the cost of constructing the vessel and related equipment, while Beebe would finance the chartering of a ship and other expenses. 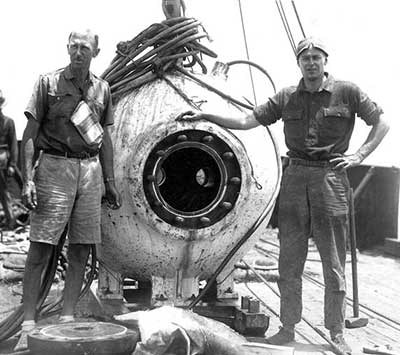 William Beebe (left) and Otis Barton with their bathysphere.

The men conducted their first unmanned test of the bathysphere on May 27, 1930, descending to only about 45 feet. They sent it down deeper for the second test, and found that the crucial electrical and phone cables, encased in a rubber hose, were badly twisted around the suspension cable. Once that issue was resolved, Beebe and Barton made their first dive, descending to 803 feet, and made several more successful dives that summer. They documented many deep-sea animals previously never observed in their native habitats, and Beebe noted how parts of the solar spectrum were filtered out during descent, until only the violet and blue hues remained. They also conduced shallower dives to map Bermuda’s underwater geography, despite the risk of the vessel colliding with the submerged cliffs.

A combination of bad weather and the Great Depression foiled diving plans the next summer, and Beebe pledged to dive down a full half-mile in an attempt to raise funding for more dives. The resulting funding enabled them to resume their dives in 1932. The project was nearly scuttled during an unmanned test of the bathysphere, when it reemerged nearly full of water. As they loosened the heavy metal hatch bolts, one of them “shot across the deck like the shell from a gun,” Beebe later wrote in his memoir, Half Mile Down. Had the two men been inside the vessel under those same circumstances, the water at such pressure “would have shot through flesh and bone like steel bullets,” before they even had time to drown.

But they fixed the leak, and a dive was scheduled for September 22, 1932. Barton planned to film the creatures through the bathysphere’s window, and NBC broadcast verbal observations as they were relayed up the phone line. It was a rough descent, and the bathysphere’s swinging from side to side caused Barton to vomit from seasickness. But they kept going, eventually reaching 2,200 feet—still 440 feet short of their half-mile goal. By then, Barton and Beebe were badly bruised from the rough ride, and asked to be brought back up.

Once again, Beebe found himself in need of sponsorship to conduct more dives in the bathysphere. This time their benefactor was Gilbert Hovey Grosvenor, editor of National Geographic, who pledged $10,000 if Beebe and Barton succeeded in reaching a depth of half a mile and Beebe subsequently wrote an article for the magazine. By this time the bathysphere was in need of some repairs, but once the renovations were complete, they succeeded in reaching 2,510 feet on August 11, 1934, just 140 feet shy of their goal. A few days later, on August 15, Beebe and Barton successfully took the bathysphere down to the promised 3,028, setting a new world record in the process. That record would stand until Barton broke it in 1949, on a dive in a new vessel he dubbed the Benthoscope.

Beebe lost interest in the bathysphere, deeming it too expensive for what little knowledge remained to be gained from such dives, but he continued to be an avid researcher. Active well into old age, even at 80 he could still scramble up tree trunks to examine bird nests. As his strength flagged, he still managed to do work in the laboratory, such as examining the structure of birds’ nests. He died of pneumonia in 1962. As for the bathysphere, it was exhibited at the 1939 New York World’s Fair and was used to observe underwater explosions during World War II, before finding a permanent home at the Coney Island aquarium in 1957.