The American Institute of Physics (AIP) started 2018 with big news: In January, AIP announced the hiring of their ninth CEO. In March, physicist Michael H. Moloney assumed his role at the helm of the organization.

AIP is a federation of scientific societies, including APS, dedicated to advancing and promoting the physical sciences. All told, the member societies serve over 120,000 scientists, engineers, and students. “AIP has been through a lot of change in the last decade,” says Moloney. “My job, 87 years after AIP was established, is to help prepare AIP to be a robust, sustainable organization into its second century of existence.”

AIP offers support and programs to its member societies to assist in communication, education, and promotion of the physical sciences, and publishes Physics Today magazine. “The most obvious benefit AIP offers to members is Physics Today—Every member of our member societies receives it,” says Moloney. “I remember getting it when I joined APS in 2001—it’s certainly a powerful brand.”

AIP is a key resource in other ways: its subsidiary AIP Publishing offers a range of journals; AIP’s newsletter FYI provides policy news and analysis; the Inside Science news service produces a range of wide-spectrum science reporting; the Institute hosts the Niels Bohr Library and the Center for the History of Physics; and the Statistical Research Center produces original research on physics education and workforce issues. 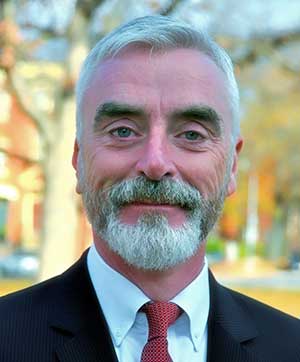 Moloney is no stranger to science organizations: He’s been a member of both the American Astronomical Society and APS for most of the last 16 years, during which time he was on the staff at the U.S. National Academies of Science. He’s also an experimental physicist in his own right, holding a doctorate from the University of Dublin, Trinity College. “I worked somewhere between [atomic, molecular, and optical] physics and condensed matter physics,” says Moloney. “It wasn’t until I arrived in the U.S. that I knew I had to be a type of physicist—back then I was just a physicist.”

Moloney’s physics background, coupled with a seven-year career in diplomacy as a member of the Irish Foreign Service, uniquely qualified him for a position at the U.S. National Academies of Science. At the National Academies, Moloney oversaw the Aeronautics and Space Engineering Board and the Space Studies Board, both of which are crucial to U.S. policy and directing the research priorities of federal agencies such as NASA and NSF.

In addition to leading the Aeronautics and Space Engineering and Space Studies boards, Moloney also oversaw the production of nearly 100 scientific reports for use by federal agencies, Congress, and policy communities. These reports—which include several decadal surveys that set research priorities—range in topics from astronomy and astrophysics to atomic, molecular and optical physics and condensed matter physics, which harkens back to Moloney’s roots in the lab.

“I think over my 16 years at the academies that I've pretty much touched all the science areas that are represented by the 10 member societies of AIP,” says Moloney. “These communities are very familiar to me and this position at AIP is an opportunity to continue to work with them in a different environment.”

“The mission of AIP has expanded from advancing physics to advancing and promoting the physical sciences,” says Moloney “Members of the American Vacuum Society or the Acoustical Society of America might not self-identify as physicists, but physics is at the core of what they do.”

Moloney has taken the helm of AIP at a time of change: “The physical sciences are in a rapid state of evolution at the moment, becoming very multidisciplinary—people are interacting across research boundaries in ways that weren’t happening ten years ago,” he says. AIP remains committed to adapting to changes within the physical sciences and continuing to serve its community of member societies, he added.

“I want to do the best job I can for AIP and the federation. I’ve always had a public service kind of ethos, and this is just an extension of that,” says Moloney. “I have been a member of APS for a long time, and I look forward to working with our colleagues at APS.”