How can we expand the reach of physics in Africa? I was motivated to share my opinion on this and the thoughts that came to me during the sessions organized by the APS Forum on International Physics at the 2018 APS March Meeting. Let me begin by asking you, the reader, to look again at any of the photos that you took at this meeting during an invited talk or a coffee break.

In your photos, and your memories from the meeting, you will see that there will be lots of international attendees, but almost no Africans. International participants were mostly Chinese, Indians, and Europeans. This is because of a concerted effort by graduate school recruiters to attract and to enroll students from China, India, and Europe. Think about it: a continent of over a billion people that has little representation in major physics meetings. School recruiters probably share a common misconception that there is not much physics going on in Africa. In general the wider mass media has done a good job in marketing Africa as a continent of war, poverty and suffering. A graduate recruiter will have a “better” chance getting the best and most prepared students elsewhere. In my view this attitude and misconception may deny U.S. institutions access to the best and brightest. 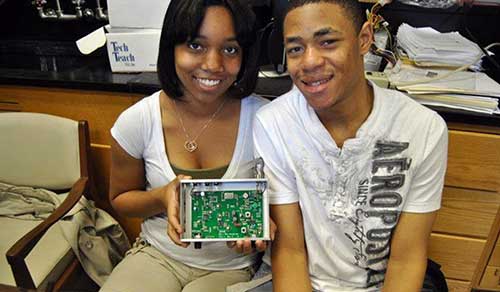 NCA&T students showing off their completed RadioJove circuit boards, used to monitor ionospheric disturbances. A similar project was carried out at the Gondar School of Science and Technology in Ethiopia.

Contrary to general belief, African physics is a thriving enterprise, maintaining strong collaborations with European institutions such as the International Center for Theoretical Physics (ICTP) in Trieste, Italy, and the International Programme in Physical Sciences (IPPS) in Sweden. There are also smaller but pointed collaborations and initiatives, mostly led by individuals and interest groups that trace their origin back to the continent. These activities include QuarkNet in Physics Education, the African School of Fundamental Physics and its Applications, the African School of Physics, and many more. Within the continent strong research and education groups are emerging; the list includes the African Institute of Mathematical Sciences, the next Einstein Initiative, the Africa Laser Center, and strong advocates for a Synchrotron Light Source for Africa. In terms of organizations there are growing national physical societies and the African Mathematical Union, the African Union of Pure and Applied Chemistry, and the African Materials Research Society. In terms of publications I am aware of the African Review of Physics (ICTP), the South African Journal of Physics, and similar national journals.

My observation here is a bird’s-eye view of physics in Africa. An introductory geography lesson teaches us that Africa is not a country, but rather a huge continent with over 50 countries, and each country has its own physics program. In the near future, with the help of the APS and its partners around the world, as well as the African physics community, it will be possible to learn the full extent and reach of physics in the continent. Despite the dynamic physics activities and the potential growth of the field in the continent, there are huge problems at the departmental and school level that limit the growth of the field.

I have traveled to many countries, including Benin (2001), South Africa (2000, 2005), Nigeria (2008), Zambia (2009), and Ethiopia (2002-2018). In these countries, with the exception of South Africa, the universities and the schools I visited have a lot in common, including lack of resources and isolation. International organizations are connecting with African-based interest groups to achieve some organizational goals. Unfortunately these groups are not necessarily working to address the central problems that limit the participation of aspiring young African physicists and students. These are hard problems that require organizations and prominent individuals to make a case with decision makers.

This brings me back to Ethiopia, where I am attempting to change the situation of physics in very small ways. Perhaps the greater APS community can use activities like mine as a resource (see the website sirius-b.ncat.edu). Educational resources such as books and computers can easily be made available to schools and universities in Ethiopia by marshalling concerned communities and using already established memoranda of understanding between U.S. and Ethiopian universities. It should be noted that merely providing educational resources is not enough. We have to be involved in shaping the physics programs at all levels. We also must add value to develop the work space for U.S. students and academics by providing seamless logistics to conduct research and educational activities in Ethiopia.

Starting in about 2001 we began online campaigns to organize the Ethiopian Scientific and Academic Network (ESAN) with the intention that they become active participants in supporting the education programs in Ethiopia. At this time the online networks provide services to thousands of students, staff members, and university administrators. Out of this came the general thinking that “Ethiopia is Where Ethiopians Are.” Ethiopians began supporting the education enterprise in Ethiopia in all subject areas. Within ESAN is the Physics in Ethiopia community, with a specific goal to provide support to physics students, academics, and physics departments. In addition to providing educational resources, members of the ESAN community participated directly in organizing high-end workshops in space weather, high-performance computing, astronomy, and material physics. The Ethiopian Physical Society in North America provides scholarships and awards to students and faculty for their outstanding work.

Some of our notable activities include the establishment of a temporal school called the Gondar School of Science and Technology that ran from 2010-2014. The school has focused on advances in space exploration and astrophysics. It became a platform for international collaboration in these fields. Most of the cost of the school was covered by the University of Gondar. The conveners were supported by their own institutions. The program was extended to local universities. It had empowerment and women-in-physics programs and information sessions on graduate and career opportunities. The school provided advanced courses and hands-on training in the use of Radiojove, which are sudden ionospheric disturbance monitors, and remotely controlled telescopes around the world. It also had a huge outreach component where local high schools and colleges participate in unique hands-on projects.

What is unique about Ethiopia is that in some of the universities the majority of undergraduate students in physics are women. For example, at the University of Gondar at this time there are 200 physics majors and 185 of them are women. Many universities in Ethiopia are coming online and beginning to reveal their programs to the world. For the sake of the inquiring reader, I visited websites of three physics departments (Addis Ababa, Bahir Dar, and Haramaya) where one can see the type of research and the people in the research. One can also see the absence of women in the faculty in relation to the high number of female physics majors in some of the campuses.

Through our ESAN online community we plan to facilitate collaboration between the U.S. and its Ethiopian counterparts in several areas, including graduate recruitment, faculty development, and creation of the working space for short-term visits by U.S. physics students and academics. In addition we are conducting an international campaign seeking support to ship thousands of books and computers to schools and universities in Ethiopia. The APS community may take this opportunity to participate in donating high-quality books, computers, and funding to cover the shipping cost. Thanks to efforts of volunteers, collaborators, and donors, we were able to ship so far sixty-four thousand books, some used computers, and soccer balls to several schools in Asela Arsi, Adama University and University of Gondar. The collaborators include Books for Africa, Wake Forest University School of Public Health, Society of Physics Students at North Carolina Agricultural and Technical State University, former Peace Corps Volunteers to Ethiopia, the Asela Arsi School Development Network (AASDO) and ESAN.

The need for books, computers, educational supplies, and libraries is huge. This collaboration, particularly with AASDO and ESAN groups, will have great results. The books are managed and shipped by a U.S.-based NGO, Books for Africa. Further information can be obtained from Dr. Abebe Kebede. Email: Abkebede@gmail.com.

The author is Associate Professor of Physics at North Carolina Agricultural and Technical State University, USA. He completed his Ph.D. work at Temple University. His academic work includes electronic and magnetic properties of transition metal oxides, heavy fermion systems, and Kondo insulators. Recently he has made significant contribution to space-science education and research at his school and throughout Africa. He is the editor in chief of a new journal, the African Journal of Physics. He is also the founder and coordinator of several scientific and academic groups including, the Ethiopian Physical Society, the Ethiopian Space Science Network, The African Scientific and Academic Network, the Ethiopian Scientific and Academic Network. Abebe is a life member of APS, a Fulbright Specialist, APS Journal Reviewer, APS Minority Speaker, and organizer of Physics in Africa sessions at the 2003 and 2009 APS March meetings and at the 2002 National Society of Black Physicists Conference. He can be contacted at Abkebede@gmail.com, or visit his website at sirius-b.ncat.edu