In 2012, CERN coaxed the long-sought Higgs boson into making an appearance, and in 2015, the Laser Interferometer Gravitational-Wave Observatory directly observed an elusive space-time wiggle. Both phenomena were theorized about for decades before their eventual discovery.

So perhaps it is high time for dark matter, the mysterious stuff that makes up around 27 percent of the universe, to finally reveal itself. But directly detecting particles that don’t reflect, absorb, or emit light is no easy task, especially without knowing what kind of particles they are — or how they interact with regular matter.

One of the prevailing hypotheses for many years has been that dark matter consists of weakly interacting massive particles (WIMPs), which are possibly 100 times more massive than a proton. Over the past ten years, direct dark matter detection experiments searching for WIMPs have improved significantly, reaching better and better sensitivities, but, so far, the hypothesized particles continue to evade even the best detectors.

“I think this has been a little bit surprising — that no one has had any indication of detecting dark matter,” says Jodi Cooley, a physics professor at Southern Methodist University and collaborator on SuperCDMS. “This is challenging theorists and experimentalists to start looking in new directions.”

So does this absence of WIMPs — and a subsequent uptick in experiments exploring alternatives — mean the WIMP hypothesis has fallen by the wayside?

Not exactly: “What’s really going on is a diversification of ideas,” says Dan Hooper, a senior scientist at Fermi National Accelerator Laboratory. “WIMPs aren’t going away as an idea; people are still very interested in them. But I think we’re much more open minded now to a greater diversity of theories.”

The secret could be that dark matter particles are much less massive than the hypothesized WIMP range, making it difficult for many detectors to catch their more subtle interactions. “Light” dark matter could help explain why traditional WIMP experiments have failed to capture their prey, but it has also opened up the field of dark matter research to a host of novel experiments.

One dark matter alternative that’s been generating excitement recently is the axion — theoretically much lighter than a WIMP, and something that wouldn’t be detected in the particle-scattering type experiments typical for direct dark matter detection. “In contrast to WIMPs, axions are very light,” says Daniel Bowring, a scientist on the Axion Dark Matter Experiment (ADMX). “People talk about WIMPs having masses between 10 and 1000 GeV — for the axion, we’re looking for masses all the way down to μeV.”

While axions aren’t a new concept, they’ve gained some traction, partially thanks to recent ADMX improvements that might finally make it possible to spot the tiny particles.

Despite dark matter’s uncertain character, many experts agree it’s definitely out there. “The overwhelming majority of cosmologists, particle physicists, and astrophysicists agree that dark matter almost certainly exists,” says Hooper. “We see evidence for it virtually everywhere we look in the universe.”

Since dark matter makes itself known through its gravitational effects, some theorists propose that what we call dark matter isn’t a new form of matter at all, but gravity behaving in a modified way. “I think the evidence is quite strong for the particle hypothesis [rather than] some kind of modified theory of gravity,” says Cooley. “But [we shouldn’t] shut down research into alternate ideas — it could be that we’re not right. But I would place most of my money on it being a particle.”

The argument for dark matter being a particle and not the result of modified gravity is that this unknown particle could answer other questions about physics: Both the traditional WIMP model and axion models help explain other mysteries of the universe.

For instance, there is the so-called “WIMP miracle.” Says Hooper, “We have this idea that whatever dark matter is, it was made in the Big Bang and it was maybe in equilibrium with all the normal kinds of matter that existed. Eventually, it froze out and stopped interacting with normal matter. [So] if there were a particle that had an interaction kind of like the weak nuclear force and had a certain mass, then you could do these calculations and you would find about the right amount of dark matter emerging from the universe.”

But the axion, despite having a much different mass than WIMPs, also fits into other physics puzzles. “The reason that people are so interested in axions is that they solve more problems than just dark matter … they solve curiosities of the Standard Model,” says Bowring. “In fact, the axion was named after a cleaning detergent because it ‘cleans up the Standard Model.’” Axions fit into a model of spontaneous symmetry breaking that helps explain CP violation — a phenomenon that may be behind our universe being more matter than anti-matter.

It’s also entirely possible that it’s not just WIMPs or axions or some other dark matter candidate, but a whole host of particles swirling around the universe. “We’re writing more papers about what we call hidden sectors where there’s not just one kind of dark matter particle but a whole bunch of different kinds of particles,” says Hooper. “They may be related or interact with each other, but they don’t really interact much with other forms of matter. They’re interesting and in the reasonable range of possibilities.”

Complementing Rather Than Competing

Finally seeing one of these particles will answer questions about what dark matter is made of. “These dark matter particles are streaming through Earth at all times; they’re all around us,” says Cooley. “We’re trying to capture one of them interacting in one of our detectors here on earth.”

According to Cooley, the United States has put its biggest investments in dark matter research into three different — but complementary — technologies: liquid xenon time projection chambers and Super CDMS technology for WIMPs, and ADMX for axions. “Between these three technologies we really cover a broad spectrum of ideas,” says Cooley. “The U.S. also puts in a modest amount of money into smaller projects…novel technologies that are pushing the boundaries that will perhaps be used to explore dark matter in the future.”

Liquid xenon detectors, like the Xenon1T experiment at the Italian Gran Sasso National Laboratories, are cylinders full of ultracold xenon, positioned to catch a wayward dark matter particle interacting inside the detector. In theory, should a WIMP — or another sufficiently massive dark matter particle — pass through the detector, it will produce tiny but measurable bursts of light.

The technology behind Super CDMS (cryogenic dark matter search), has been around for a few decades, but a new and improved version is currently being deployed at Snolab in Canada. “The technology is built upon these germanium and silicon crystals at very cold temperatures — the crystal lattice is very, very still and we wait for dark matter interactions to come in,” says Cooley. These in turn cause vibrations in the crystals. This technology results in high sensitivity and good resolution, which means it can look for more than just WIMPs: “This is giving us the ability in future generation experiments to look at very light dark matter particles,” says Cooley.

Since ADMX focuses on tiny axions rather than WIMPs, it relies on a different method of looking for dark matter particles. “The axion should couple very weakly to electromagnetism, which means in the presence of very strong magnetic fields the axion converts to photons — and the frequency of those photons is set by the axion mass,” says Bowring. “Since we don’t know the axion mass, we don’t know the frequency of the photons beforehand — it’s like we have a radio that we’re tuning to pick up a very faint radio station.” Recently, ADMX announced it had reached the sensitivity necessary to discover these faint frequencies — it’s just a matter of finding them.

More of a Trickle Than a Bang

When one of these detectors — or one of many other approaches to direct dark matter detection — finally catches a glimpse of dark matter, it won’t be met with immediate fanfare. “Just one observation isn’t going to send everyone home thinking we’ve done it — there’s usually a period where people are skeptical and have many different interpretations and opinions,” says Hooper. “Only as different measurements come together will a real answer begin to emerge from the data … more of a trickle than a bang.”

To really say whether dark matter has finally been unmasked will take signals from multiple detectors to confirm it’s not a fluke. The discovery of the Higgs boson was quickly confirmed, since both ATLAS and CMS — the two large detectors at the Large Hadron Collider at CERN — saw the same thing. One experiment at Gran Sasso called DAMA/LIBRA claimed a detection, but it hasn’t been reproduced elsewhere.

So far, most people agree we haven’t found dark matter yet, but it’s a good time to look. “Right now is an exciting time, because everybody is thinking about where we should go next with new frontiers opening up,” says Cooley.

She says that keeping up the rate of progress in dark matter detection requires investment, both in established detector technologies and bright new ideas. “It’s like an investment portfolio: there’s a main amount of money to put into what you’re doing now,” she says, “but you can’t neglect what comes next.” 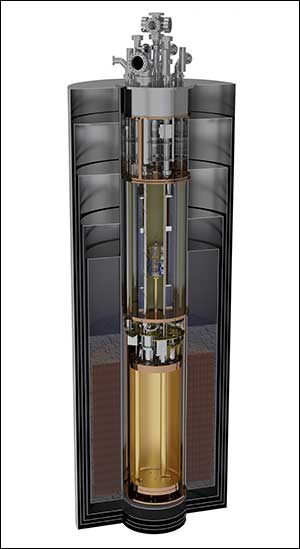