This summer, as World Cup fans cheer in front of TVs across the globe, take a look at the small grey-and-white sphere rolling at the players’ feet. You may notice that even though the rules of the game haven’t changed — the ball has.

Adidas calls its latest ball re-design the Telstar 18. Unlike the classic black-and-white leather ball with 12 pentagons and 20 hexagons stitched together, the Telstar 18 consists of 6 synthetic panels, glued together thermally, no thread required. Its surface is dotted with tiny raised stipples, pleasant to grip in your bare hands. It even contains a chip that your phone can read to unlock online soccer-related content.

But when it comes to playing the game, John Eric Goff knows that the ball’s most important property isn’t its matte finish or its phone-compatible features. It’s aerodynamics.

The University of Lynchburg physicist and author of Gold Medal Physics: The Science of Sports has studied how different balls soar for over a decade. To measure aerodynamics, his team jam rods into the backs of soccer balls and blast them with 80 mile-per-hour winds in a wind tunnel. They used to use special launchers and high-speed cameras to analyze ball motion, too.

The irony is that they need to perform these tests at all: In professional soccer, game balls are standardized, so you might think that all balls will behave the same way. The International Football Association Board specifies the circumference, weight, pressure, and material. Before the design ever reaches the pitch, officials perform tests on a sample set of the balls to confirm they roll straight. They even soak them in tanks of water to figure out how much moisture the material absorbs so that the ball’s weight doesn’t increase too much during a rainy match.

But in spite of the standards, distinct designs still kick differently. Even when discrepancies seem subtle, the players feel it, and they don’t appreciate having to adjust to a new ball. “If I kick a ball, I’m not good enough to be able to tell the difference,” says Goff, who is unaffiliated with the World Cup and Adidas. “But at their level of ability, those players will notice if they kick a ball the same way year after year, and all of a sudden it doesn’t fly the same way.”

Famously, teams loathed the 2010 World Cup ball, the Jabulani, also made by Adidas — players complained the ball was too floaty. In a New York Times story that year, Spanish goalkeeper Iker Casillas compared it to a beach ball. “A disaster,” France’s Hugo Lloris added. The ball would wobble unpredictably like a beach ball during airborne kicks such as free kicks, penalties, and corner kicks. 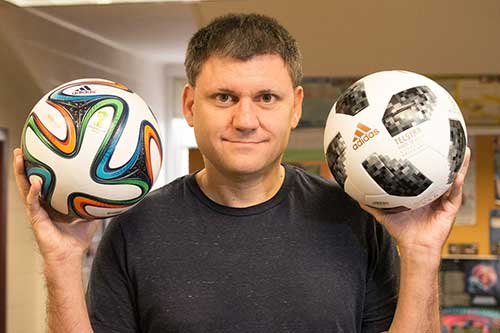 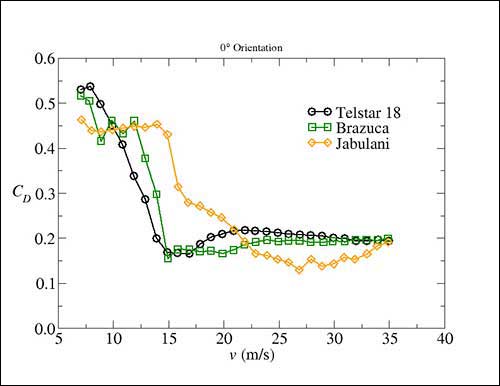 Drag coefficients (CD) for three different balls: the 2010 Jabulani, 2014 Brazuca, and 2018 Telstar 18, as a function of speed. The "drag crisis" occurs where the coefficient is a minimum.

In a 2014 paper, Goff and his collaborators at the University of Tsukuba in Japan pinpointed the physics of why players hated the ball so much — because they responded to air resistance differently than most soccer ball designs. Balls experience air resistance differently depending on their surface, which changes on different ball designs due to the length of their seams or the texture of the material. You can quantify a ball’s response to air resistance with three numbers — a drag coefficient for each spatial dimension. These coefficients change depending on the speed of the ball.

As a ball reaches a critical speed — which differs based on ball design — its drag coefficients decrease drastically until suddenly leveling off (see figure). This speed signifies a transition in the ball’s behavior known as the drag crisis, and it occurs when air flow over the ball changes from smooth to turbulent. This transition occurs at slower speeds for balls with rougher surfaces. A beach ball, for example, experiences smooth air flow at higher speeds than a dimpled golf ball — or a typical 32-panel soccer ball.

Air flowing over the Jabulani ball, they found, switches from smooth to turbulent when it reaches about 50 miles per hour. This is roughly the speed of free kicks and corner kicks — which meant that during these common kicks, airflow over the Jabulani would switch from smooth to turbulent suddenly, causing its erratic wobble. In contrast, other soccer balls they studied experience the drag crisis at much lower speeds. For example, they found that the onset of turbulent airflow occurs at about 30 miles an hour for the Brazuca, the subsequent ball redesign in 2014, which meant that the Brazuca didn’t suffer the same fate during free kicks.

Jabulani’s problem was that it was too smooth. It needed to transition to turbulent flow at a slower speed. Goff points out that the Spanish team, the 2010 World Cup champion, heavily relied on a strategy of short-range passes that could avoid the Jabulani’s aerodynamic problems altogether.

As for the Telstar 18, Goff and his collaborators tested it soon after Adidas released it last November. In a paper published in May, they reported that the ball experiences the drag crisis at a reasonable 30 miles per hour, similar to its predecessor, the Brazuca. The Telstar 18’s seams are longer than the Brazuca’s, but they’re also narrower and shorter, amounting to an overall similar roughness. However, the ball won’t behave identically to the Brazuca: Goff modeled trajectories for the ball and also found that for long-range kicks, the new ball will travel about 10 percent less distance.

Overall, though, the Telstar 18 is pretty similar to the previous model, says Goff. Argentine star player Lionel Messi is quoted as liking the ball, according to a FIFA press release, but still, not everyone is happy with the latest redesign. “I bet you as much as you like that we’ll see at least 35 goals from long range [in Russia], because it’s impossible to work out,” Spanish goalkeeper Pepe Reina told Spanish sports site AS. “And it’s covered in a plastic film that makes it difficult to hold on to.” And for all its similarities to the Brazuca, some players griped about that one too — because they don’t like change. “There will always be somebody complaining about the new ball,” says Goff.

So why keep re-designing the soccer ball when players hate change?

Money, says Goff. Your local sports store likely carries FIFA-approved replicas of the Telstar 18 for $164.99 — and “people want to buy them,” he says. In 2013, Adidas signed a deal to exclusively supply the World Cup ball until 2030, which they have done since 1970. According to Reuters, the company made $2.4 billion dollars in soccer sales during the last World Cup year in 2014.

If Adidas is going to keep redesigning the ball, Goff has some advice. If it were up to him, FIFA should make sure the ball’s drag crisis occurs at a consistent speed from year to year, regardless of whatever bells and whistles the new designs might have. “That would be a good standard,” he says.

The author is a freelance science writer in Tucson, Arizona.