Getting a Running Start in Physics

In February 2016, Karna Morey was a high school sophomore at track practice when his coach brought him an article about a new physics discovery: the first detection of gravitational waves by the Laser Interferometer Gravitational-Wave Observatory (LIGO). Now a senior at the prestigious North Carolina School of Science and Mathematics (NCSSM), Morey is contributing to gravitational wave research himself.

At the 2018 APS April Meeting, Morey presented his work on predicting the type of gravitational waves that will be measured by the future Laser Interferometer Space Antenna (LISA). The work was done in collaboration with Zach Nasipak and Charles Evans at the University of North Carolina-Chapel Hill, and Jonathan Bennett at NCSSM. “As part of my research, I looked into making potential modifications that will further the accuracy of the existing models,” said Morey. “Compared to the previous models [ours] actually performed a lot better than we thought it would.” 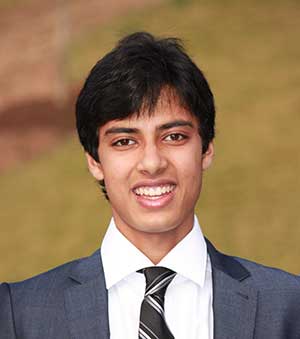 These waves aren’t detected by LIGO on Earth, but LISA, which will be constructed in space and scheduled for launch in 2034, may be able to spot them. To gain the desired sensitivity in the right frequency range, LISA will consist of three spacecraft, separated by 2.5 million kilometers in a triangular formation.

Morey gave a poised presentation at the APS April Meeting, but just over a year ago, he attended a conference on theoretical gravitational wave modeling and was overwhelmed. “The people there talked about all these things that sounded really interesting, but they were using words and equations that seemed so complex I didn’t think I could ever begin to understand them,” recalled Morey. “It was intimidating, but at the same time it was incredibly intriguing.”

Rather than allow the complexities of studying gravitational waves, black holes, and the universe to scare him off or postpone his start in research, Morey dug deep, voraciously reading textbooks and published papers and working on his own projects.

That work paid off for Morey at the April Meeting: he saw some of the same people present again, and this time he understood almost everything. “One of the coolest things as a high school student that I’ve experienced is going from knowing nothing to knowing something,” said Morey. “I’m very far from being even close to a lot of the experts in my field, but it’s been incredibly rewarding to go from knowing nothing to knowing how beautiful and interesting the work that’s being done in my field is.”

This April Meeting was likely the first of many for Morey as he embarks on his physics career: He will attend the Massachusetts Institute of Technology in the fall and wants to go to graduate school. However, before grad school, Morey also plans to spend a year teaching math and science through the Peace Corps to share his love of physics with others. “I’ve been lucky to get the opportunities that I’ve had so I think it’s important for me to give back to the world,” said Morey. “In life, I want to combine my love for physics with something that helps other people achieve their goals or find their passion.” And Morey already sees the importance of passion in physics: He encourages other young researchers to seek out projects that “really makes you want to get out of bed every day because you want to work on it,” because “physics research can be really, really hard.”

Morey credits his early entrance to physics research, and the success he’s already achieved, to the support of his mentors, his school, and his family and friends. “Whenever I have victories in my research, whether big or small, I think of myself and those victories as the result of standing on the shoulders of the giants around me,” said Morey, quoting Isaac Newton. “I’m incredibly thankful for all those people and for APS for providing me with this amazing opportunity to study physics and learn more about the world around me.”