In 2009, Brian Zamarripa Roman found himself facing difficult times. After discovering his passion for physics as a high school junior, his father suddenly passed away, leaving Zamarripa Roman to help his mother raise his three siblings while attending college at the University of Texas at El Paso.

“I had to work at Burger King and sell used car parts to help make ends meet for my family,” he recalled of his struggle. “I was in an engineering program and ended up with a D in the first design course. I switched my major to physics and excelled and went in search of a Ph.D. But when graduation came around, I was distracted. I had missed the deadlines to apply for the [Graduate Record Exam] and for graduate schools.”

Zamarripa Roman and two other students who participate in the APS Bridge Program (APS-BP) recently shared their inspiring stories with members of Congress on Capitol Hill. They met with Rep. Barbara Comstock (VA-10th), Rep. Joaquin Castro (TX-20th), and Sen. Todd Young of Indiana, and visited other congressional offices as well.

Part of the APS education and diversity activities since 2012, the Bridge Program is an effort to increase the number of physics Ph.D.s awarded to underrepresented minority students, including African Americans, Hispanic Americans, and Native Americans. APS aims to achieve this goal by creating sustainable transition programs and a national network of doctoral-granting institutions to support and mentor students and enable them to successfully complete Ph.D. programs.

Qualified applicants are students who either missed the deadlines for applying to graduate school or were rejected from every program to which they applied but showed promise for acceptance. In both cases, the program enables students to retake coursework or gain valuable research experience to become better prepared for physics Ph.D. programs. 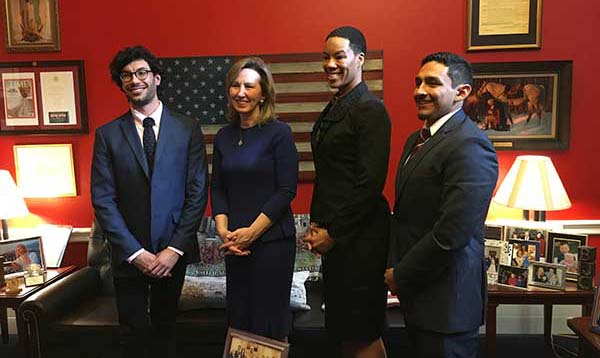 Members of Congress and their staff were delighted to hear how the Bridge Program had positively impacted the students’ lives. “They all were very receptive and interested in hearing our stories,” said Zamarripa Roman. Added Francis Slakey, chief government affairs officer for APS, “It’s important for Congress to hear these students’ stories and see how lives are transformed by a program supported by the National Science Foundation.”

In Comstock’s case, she was so engaged during the meeting that she delayed the start of another meeting on her schedule to spend more time talking to the students. She also snapped a picture with the students and posted it on Twitter.

“During the past six years, the program has placed more than 150 students into supportive graduate programs. In 2017 alone, 46 students were placed into graduate programs,” said Erika Brown, APS-BP manager. “A number of our students have been awarded competitive fellowships through their institutions and various government funding agencies. Several have even published first-author papers in the top journals of their respective fields, and of science as a whole.”

Brown added, “Our student retention rate ranges between 80% and 85%, which is higher than the national average for physics Ph.D. programs (about 60%). We are so pleased with the success of our students, and are thrilled by the prospect of our first Ph.D.s graduating in the next year.”

Zamarripa Roman’s life took a turn for the better after he applied to the APS-BP and was accepted at the University of Central Florida (UCF) in 2015. After completing the APS-BP there, he was accepted at UCF to work on his Ph.D. “The mentorship through the Bridge Program has been so valuable to me,” he said. “We are a community, and I appreciate that so much. I’m not alone. I have other students who are like me in this program, and we are making a difference by helping each other achieve our goals.”

After Zamarripa Roman finishes his Ph.D., he plans to pursue a postdoctoral position, conduct physics education research at the collegiate level, and eventually get involved with science policy. “Science policy will help me make a difference with important research programs that are funded by the federal government,” he said.

After realizing that a career in finance was not for her, in 2009 Michelle Lollie found herself reading a published paper about quantum teleportation. With her attention captured by the paper, she immediately knew she wanted a career in physics. In 2012 she enrolled as an undergraduate in the Rose-Hulman Institute of Technology, where she experienced a wake-up call in the form of academic rigor. As she remembered, “It was the hardest four years of my life, but being at Rose-Hulman enabled me to build up both the mathematical and psychological skills I needed to succeed in the physics field.”

Next, Lollie applied to 12 graduate schools and was rejected by all of them. She then applied to the Bridge Program and was accepted at Indiana University, where she established strong bonds with mentors and fellow participants. “When you have academic insecurities, and you have struggled, you really need a good support system,” she advised.

She went on to Louisiana State University (LSU) for her Ph.D. Lollie gives a lot of credit to her mentor there, physics professor Jonathan Dowling, who has “played a vital role” in her pursuit of a Ph.D. in physics. He served as her adviser while she completed an undergraduate research experience. Dowling was also instrumental in helping Lollie land a fellowship doing quantum optics research this fall. “I’m a woman of faith, and I believe I was destined to study physics. I plan to work with advanced quantum technologies for defense research,” she said.

The Bridge Program has been a light in the life of Dylan Smith, who endured a dark period after his mother and father were diagnosed with serious health problems. Smith was a junior in high school when he learned of his mother’s condition, and his father had to retire early on a lower pension.

With the help of “a generous amount of need-based financial aid and merit-based scholarships,” Smith enrolled as a student at Colgate University, but his experience there wasn’t a bed of roses.

“I bombed mechanics. I got a C-,” he recalled. “It took a couple of years at Colgate to really figure out what I needed to do to really succeed. I attended professors’ office hours, got tutored, and worked with the right people on assignments.”

Although Smith’s GPA rose above a 3.0, he realized that it might not be high enough for graduate school, and he lacked the experience to be successful in a graduate program. He remained relentless in pursuing his goal, but unfortunately was rejected from every school he applied to. Offering a ray of hope, Beth Parks, his senior research adviser, suggested Smith apply to the Bridge Program.

He took her advice, and thanks to the program, he was able to attend DePaul University from September 2014 through June 2016. While there, he gained a better understanding of physics and improved his interpersonal skills through his job as a teaching assistant.

“My time at DePaul also enabled me to learn how to more effectively and competitively apply to Ph.D. programs. I learned that establishing some sort of contact, either by email or in person, months before application deadlines, was important,” recalled Smith. “Perhaps the greatest thing that my two years at DePaul afforded me was the opportunity to think about what I really wanted to study and focus on within physics.”

In 2016, Smith was accepted into a Ph.D. program at the University of Michigan, where he is working toward his career goal. “I plan to become a medical physicist,” he said. “I want to work in a hospital in radiation oncology. None of this would have been possible if it hadn’t been for Beth Parks letting me know about the Bridge Program. It's hard to convey just how grateful I am, and how lucky I was for everything to work out the way it did.”