For many people, engagement with physics ends when they walk out of a high school or college physics classroom. But a science-literate public is important to informed decision-making in an increasingly technological world.

Each year, APS awards its Public Outreach and Informing the Public Grants, often called mini grants, to fund projects aimed at engaging all ages, from kindergarteners to senior citizens. These selected innovative, original, and sometimes experimental projects can receive up to $10,000 to kickstart public outreach campaigns to educate — and often amaze — their audiences.

Since its conception in 2011, the public outreach grants program has supported a wide variety of projects, from physics videos to museum exhibits to a physics-based escape game (which involved locking willing participants in a fictional laboratory and where they used physics-based clues to win the game and escape). Each group that receives a grant is required to present the results of their projects at the APS March Meeting to share what worked — and what didn’t — which can help future outreach endeavors. 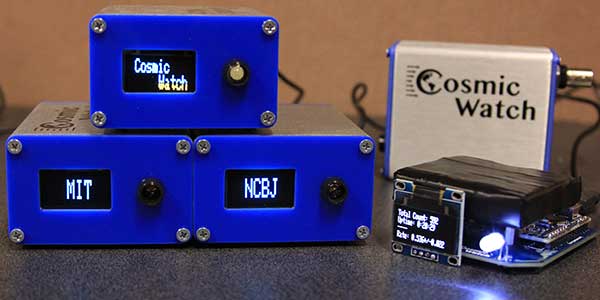 Small muon detectors will allow visitors to Letchworth State Park in New York to learn about cosmic rays. The program was funded by APS outreach mini-grants. These detectors were originally designed by CosmicWatch.

Funds for the mini grant program jointly come from the National Science Foundation (NSF) and APS and are awarded based on project proposals. However, the 2018 mini grants may be some of the last: NSF funding is running out and won’t be renewed for this program. In the coming months, APS will be looking for ways to replace external funding and continue supporting innovative outreach efforts. (For information about ways you can help, please contact Irene I. Lukoff, APS Director of Development: lukoff@aps.org or 301-209-3224.)

Projects are selected for funding by APS Head of Public Outreach Rebecca Thompson and the APS Committee on Informing the Public, a group of public outreach and engagement experts from a variety of backgrounds and institutions. This year, eight proposals made the cut.

Two of the selection committee’s favorite proposals will take particle physics into places people might not expect: state parks and libraries. One winning team will take muon detectors to Letchworth State Park in New York, allowing visitors to learn about cosmic ray muons and discover how the number of muons reaching Earth changes at different areas of the park. “State parks already have a lot of science in them, like environmental science or biology,” says Thompson. “This project adds physics to the science that’s already there.”

Another group will use their mini grant funds to bring cloud chambers — visually stunning particle detectors that allow onlookers to spot particle interactions — to libraries. “We love doing things with libraries, since they’re already a hub of learning,” says Thompson. “This project will bring physics to an informal educational space that doesn’t usually have much science.”

Proposals for innovative public outreach projects come to the selection committee from many different groups, from national labs to universities to independent science outreach groups — but applicants don’t have to be outreach experts to get funds to try something new. Students at the University of Waterloo were responsible for one popular and incredibly successful event called Light at the Museum which drew in more than 40,000 visitors with displays of the science of light.

Most other grant programs for outreach projects either give out large sums of money — like NSF grants for $1 million for established programs — or small grants in the neighborhood of $1,000, designed to help pay for a project that’s getting the bulk of its funding elsewhere or a small one-time event, like a public lecture. The APS mini grants cover a funding range in between these amounts to provide a space for new ideas to establish themselves and, hopefully, grow into larger programs.

“We like to fund projects that haven’t been tried before, and at this level of funding, we can be experimental,” says Thompson. “There’s freedom for projects to be spectacular failures, but that allows us to figure out what might work next time.”

Receiving a mini grant from APS often provides an additional boost to projects beyond the funding, notes Thompson. “Giving a project the APS stamp of approval helps to send a message that physics outreach isn’t just something to do on the weekends,” says Thompson. “Even just putting together an application for the grant can rally a department around a project.”

For more on the outreach activities at APS, visit the Physics Outreach page.