In 18th century Europe, intricate mechanical creatures were all the rage among nobles and commoners alike. The undisputed master of lifelike automatons was a French inventor named Jacques de Vaucanson, whom Voltaire dubbed a "new Prometheus."

Vaucanson was born in Grenoble, France, in 1709, the tenth child of a glove maker. Raised in poverty, the young Jacques showed an early interest in mechanical objects, and he was fascinated by the church clock whenever he accompanied his Catholic mother to confession. He built his own version of the clock at home. When his father died, the seven-year-old boy was sent to a monastery for schooling; he brought along a metal box filled with his parts and tools, the better to build a model boat. It interfered with his studies, but his math teacher was sufficiently impressed with the boy’s drawings that he decided to help his student with the project.

Given his financial situation, Vaucanson decided a life in the clergy would give him the freedom to pursue his scientific interests on the side. So he became a novice in the Order of the Minims in Lyon, where he found a patron in a local nobleman and set up a workshop. When the head of the order came to visit, Vaucanson’s sense of whimsy led him to build some rudimentary automata to serve dinner and clear the tables after the meal. The effort backfired: the visitor denounced the inventor’s mechanical bent as "profane," and forced him to shut down his workshop.

A disappointed Vaucanson abandoned his plan to become a monk and withdrew from the order, running away to Paris instead, where historians believe he took classes in anatomy and medicine at the Jardines du Roi. He definitely found another patron to finance his dream of building lifelike automata. During an illness, he dreamed of a flute-playing automaton, which inspired him to design a real-life version, hiring local clockmakers and craftsmen to fabricate the intricate parts. 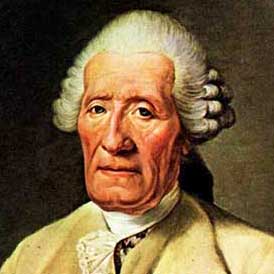 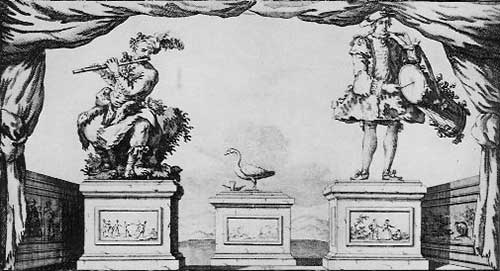 Mechanical musicians and a defecating duck

He unveiled his flute-playing creation at a public exhibition on February 11, 1738, and it was a huge success, drawing regular crowds for over a year. The wooden figure was painted white, the better to resemble a sculpture’s marble, with a corresponding mechanism for every tiny muscle involved in the task. Thanks to an intricate set of pipes and bellows, the automaton could "breathe," and the mouth had a movable tongue, the better to control airflow through the flute. After struggling with motion of the wooden fingers, he wound up covering them in a soft glove-like skin. The automaton could play 12 different melodies.

His success brought an invitation to present his automaton to the French Academy of Sciences the following year. The academy judged the machine "extremely ingenious," and praised "both the intelligence of the creator and his extensive knowledge of mechanical parts." However, court musician and flautist Johannes Joachim Quanta found the playing shrill, probably due to the limited motion of the robot’s mechanical lips. As audiences grew bored with his flute player, Vaucanson built a second automaton, a tambourine player with a repertoire of 20 tunes.

But the inventor’s masterpiece was a gold-plated, life-sized Defecating Duck automaton that could quack, rise up on its legs, and boasted what Vaucanson claimed was a functioning digestive system—perhaps inspired by its inventor’s own lifelong struggles with digestive ailments. The duck would swallow grain and a "chemical factory" in the stomach would decompose the food, excreting the waste in front of a live audience. Decades later, a magician named Jean-Eugene Robert-Houdin—who built his own automaton—discovered that Vaucanson had tricked his audiences with a clever artifice: the digestion wasn’t real. The waste was actually pre-stored bread crumbs dyed green to look like digested grain.

The mechanical duck was a smashing success, and Vaucanson would up touring Europe with his creations. Voltaire memorably observed in 1741 that "without the voice of le Maure and Vaucanson’s duck, you would have nothing to remind you of the glory of France." It was also immortalized in Thomas Pynchon’s novel Mason and Dixon, in which the duck attains consciousness and chases a chef across the United States. Alas, the infamous duck is believed to have been destroyed when the museum in which it was purportedly housed burned down in 1879.

Eventually Vaucanson grew bored with his automata and sold them off to a trio of businessmen. King Louis XV had just appointed him inspector of silk manufacture, in hopes of making the silk industry in France competitive with its rivals in England and Scotland. Far ahead of his time, in 1745 he invented the first automated loom, and hoped to introduce punch cards to the industry. But the weavers revolted, fearing for their jobs, and pelted him with stones as he walked through the streets. Vaucanson retaliated by building a loom powered by a donkey, declaring that "a horse, an ox or an ass can make cloth more beautiful than the most able silk worker."

This did not go over well. The king came to his inspector’s defense and cracked down on the weavers, forbidding them from public meetings, issuing fines, and imprisoning some of them. Yet they persisted in their protests, and the king relented after a year. Fifty years later, Joseph-Marie Jacquard would succeed where Vaucanson failed with an automated loom.

Vaucanson died in Paris in 1782. His vision of an automaton capable of reproducing digestive functions was finally realized in 2006, when a Belgian conceptual artist named Wim Delvoye unveiled his "Cloaca Machine," a mechanical and chemical apparatus that really did digest food and turn it into waste, carefully vacuum-sealed in specially branded bags and sold to eager art collectors. (See youtube video)