January 1, 1995: Confirmation of the Existence of Rogue Waves

For centuries, scientists believed rogue waves were a myth, despite eyewitness accounts from returning mariners. The 19th century French explorer and naval officer Jules Dumont d’Urville made a name for himself as a botanist and cartographer, sailing around the world on various expeditions. Yet for all his fame and prestige, when Dumont reported seeing rogue waves over 100 feet high on his voyages, bolstered by three eyewitnesses who’d been with him, his claims were dismissed. Prime Minister Franҫois Arago publicly ridiculed him.

The skeptics based their doubt on the then current scientific consensus that waves of such size simply did not exist. The standard linear models that oceanographers, engineers, and meteorologists used to predict wave height largely ruled out giant rogue waves. And eyewitness accounts were few and far between, perhaps because most mariners who encountered such a wave rarely returned to tell the tale. With the advent of steel-hulled ships in the 20th century, the probability of survival increased dramatically—and so did the number of reported sightings.

A Scottish oceanographer named Laurence Draper wrote the first scientific article about rogue waves—he called them "freak waves"—in 1964, detailing efforts by the National Institute of Oceanography in Southampton to record wave heights. Ironically, Draper—who trained as a physicist at Nottingham University—suffered from chronic seasickness, and initially feared it would derail his career. "I expect I had better resign. I am no good at sea," he told his employer after falling ill on his first working expedition. Instead, he put his scientific talents to good use on dry land and made his name as an expert in wave analysis and prediction. He came by his fascination with waves after stumbling upon a newspaper article on how ocean waves can adversely affect military operations.

Draper based his 1964 analysis on recordings made by a British weather ship in the North Atlantic. At the time, the highest wave recorded was about 67 feet. Most oceanography textbooks didn’t even mention the possible existence of rogue waves. "[F]ar from ridiculing the old sailors’ stories about enormous waves, modern research has confirmed that such monsters can occur, and that wave heights can exceed by an appreciable amount the maximum values which have been accepted in responsible circles," Draper wrote in 1971. 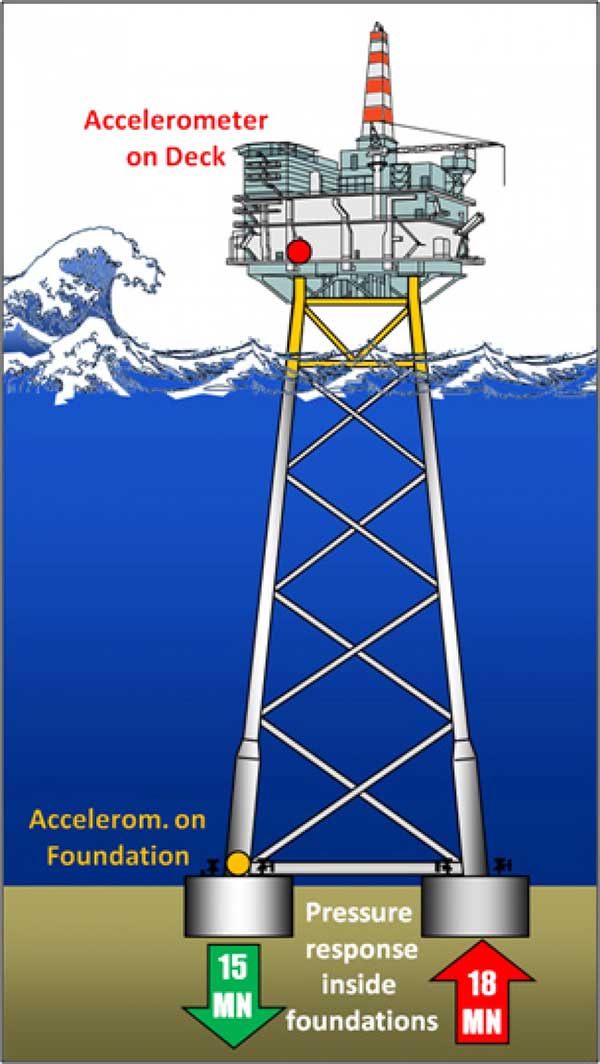 Measurements in 1995 with instruments on the Draupner oil-drilling rig confirmed a rogue wave height of 85 feet.

The first real measurement of a rogue wave occurred on January 1, 1995. It was recorded by a laser detector on the Draupner oil-drilling platform, owned by Statoil, which was located 100 miles off the coast of Norway. Statoil built the platform to withstand a wave of 64 feet, with a probability of occurring once every 10,000 years. Yet the "Draupner wave" of 1995 measured a whopping 85 feet—21 feet taller than predicted—and its characteristics didn’t fit any previous wave model.

Statoil’s scientists followed up in 2000 with a paper concluding that, far from being an ultra-rare phenomenon, rogue waves were likely more frequent than previously believed from prior models. (This has since been confirmed by various satellite radar studies.) That same year, a British vessel called the RRS Discovery recorded a 95-foot rogue wave off the coast of Scotland, which made headlines because none of the theoretical models predicted such a wave under the conditions at the time.

In fact, there could be as many as ten rogue waves forming in the world’s oceans at any given moment. This would explain the mysterious sudden loss of several ships, such as the cargo ship MS München in 1978 and the MV Derbyshire in 1980. Like the Titanic, the München was thought to be unsinkable, yet the ship and her crew were lost at sea, with a single starboard lifeboat recovered from the floating wreckage offering the first physical evidence of the force of rogue waves. The damage to the lifeboat was such that the wave that hit the ship must have been around 65 feet high.

The National Oceanic and Atmospheric Administration put together a catalog in 2007 listing 50 historical maritime incidents that were most likely due to rogue waves. Rogue waves may form even in lakes, via a phenomenon known as the "Three Sisters," in which three large waves form at the same time, and can strike a vessel in quick succession, creating a large backwash and overloading a ship’s deck with water. The famed 1975 wreck of the SS Edmund Fitzgerald—immortalized in the popular ballad by Gordon Lightfoot—may have been due to the Three Sisters.

Rogue waves are an active area of research, and may not be limited to oceans and lakes, having recently been reported in liquid helium and microwave cavities. Scientists now think they form as the result of constructive interference, when different waves travel at different speeds and pile up under certain circumstances. While there is no known way to predict when rogue waves will form, we are learning to spot them sooner. In 2016, MIT scientists devised a new algorithmic prediction tool to spot clusters of waves in the ocean that could develop into a massive rogue wave, giving sailors a few minutes warning before the wave hits.

There may even be "super rogue waves" that can appear suddenly in seemingly calm seas and engulf unsuspecting ships. Scientists at Australian National University, Hamburg University of Technology, and the University of Turin demonstrated the possibility in a 2012 experiment involving a LEGO pirate on a ship floating in a fish tank that was published in Physical Review X. Their findings were consistent with the so-called "Peregrine soliton" explanation for how rogue waves form, namely, that nonlinear interactions between waves allow one wave to sap energy from surrounding waves and focus it into one much larger, short-lived wave.

Casey, S. 2011. The Wave: In Pursuit of the Rogues, Freaks, and Giants of the Ocean. Anchor Canada.