The editors of Physics select their favorite articles from the past year (reprinted from physics.aps.org).

2017 was another sensational year for gravitational-wave detection. Days after the Nobel Prize in Physics was awarded to three leaders of the decades-long search for these spacetime ripples, the LIGO and Virgo collaborations announced the detection of a gravitational-wave signal emanating from the merger of two neutron stars (see the Viewpoint Neutron Star Merger Seen and Heard. If this achievement wasn’t enough, multiple telescopes around the world also captured the myriad electromagnetic fireworks accompanying this merger. For the first time, electromagnetic signals and gravitational waves were detected from the same source, heralding a new era of astronomy in which scientists can both watch and "listen" to objects in the cosmos. Virgo coming online and adding one detector to LIGO’s two was essential to achieve this triumph (see the Focus Three-Way Detection of Gravitational Waves). With three detectors running, the scientists were able to more accurately pinpoint the source of the gravitational waves, localizing the event to a patch of sky small enough for telescopes to survey. 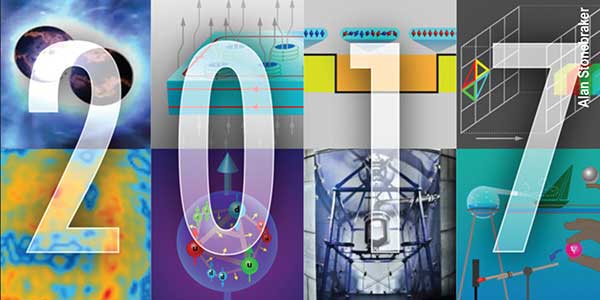 Cooking Up a Time Crystal

Time crystals are quirky states of matter whose structure repeats both in time and in space. The idea, theorized five years ago by Frank Wilczek (see the Viewpoint Crystals of Time), was initially discarded because theorists proved that time crystals cannot exist in thermal equilibrium. But this year, a quartet of U.S.-based scientists exploited an open loophole in the argument against time crystals: such states can exist in nonequilibrium systems that are driven periodically by an external force. The researchers presented a recipe for cooking up a time crystal using a string of cold, trapped ions (see the Viewpoint How to Create a Time Crystal). In their scheme, the ions are subjected to periodic spin-aligning pulses. The team predicted that the ions would evolve to form time crystals, whose signatures would be periodic oscillations in the spins’ magnetizations. Within three months of the proposal, time crystals were realized in two different systems: a chain of trapped atoms and spin impurities in diamond.

Quantum Cause and Effect

Red suits and white beards are highly correlated this time of the year, and statistical tools can verify that they share a common cause (or Claus!). However, similar inferences are tricky in quantum physics. For example, two entangled photons are by their very nature strongly correlated, but a common cause (or "hidden variable") is ruled out by so-called Bell-test experiments. To deal with these quantum peculiarities, researchers from the UK and Canada reworked the definition of causality (see the Viewpoint Causality in the Quantum World). The team based their model of quantum cause and effect on unitarity, which says that quantum information is conserved as a system evolves. Under their new formalism, one can determine whether a quantum system A is the common cause of two correlated quantum systems B and C by relating the probability distributions of quantum variables in the different systems. This quantum causality model could help in predicting the effects of peeking at information in a quantum cryptography system.

A Wi-Fi router connects you to the world, but its microwave radiation can also be used to produce images of its surroundings, according to researchers at the Technical University of Munich (see the Focus Imaging with Your Wi-Fi Hotspot). This imaging is difficult because the router blasts radiation in all directions, which leads to multiple reflected images. The team solved this problem by processing Wi-Fi radiation data as though they were decoding a hologram—a 2D encoding of a 3D image. They placed a meter-sized cross between a router and a detector and scanned the detector across a 6-m2 area, demonstrating that they could reconstruct an image of the cross. The team also simulated the imaging of a small building’s interior, suggesting that the technique could be used to locate objects in a warehouse. Since the radiation penetrates walls, Wi-Fi imaging might eventually be used for law-enforcement purposes.

Cuprate Superconductors Not So Unconventional?

Copper oxide superconductors, or cuprates, hold the record for the highest critical temperature, but their behavior still defies theoretical explanation. It is generally believed that the standard theory of superconductivity, known as the Bardeen-Cooper-Schrieffer (BCS) theory, cannot adequately describe cuprate superconductors because it predicts certain signatures that have not been observed in these materials. Using a scanning tunneling microscope, a team of researchers in Switzerland and Germany found a hallmark of BCS superconductivity in a cuprate compound: twirls of supercurrents containing pockets of nonsuperconducting electrons (see the Viewpoint Cuprate Superconductors May Be Conventional After All). While the results don’t yet clarify the mechanisms that make cuprates superconduct at high temperature, they suggest that a BCS-based description may hold the key to solving this grand puzzle of condensed-matter physics.

Gluons Provide Half of the Proton’s Spin

The gluons that bind quarks together in nucleons provide a considerable chunk of the proton’s total spin. That was the conclusion reached by Yi-Bo Yang from the University of Kentucky, Lexington, and colleagues (see the Viewpoint Spinning Gluons in the Proton). By running state-of-the-art computer simulations of quark-gluon dynamics on a so-called spacetime lattice, the researchers found that 50% of the proton’s spin comes from its gluons. The result is in agreement with recent experiments and shows how such lattice simulations can now accurately predict an increasing number of particle properties. The simulations also indicate that, despite being substantial, the gluon spin contribution is too small to play a major part in "screening" the quark spin contribution—which according to experiments is only 30%—through a quantum effect called the axial anomaly. The remaining 20% of the proton spin is thought to come from the orbital angular momentum of quarks and gluons. 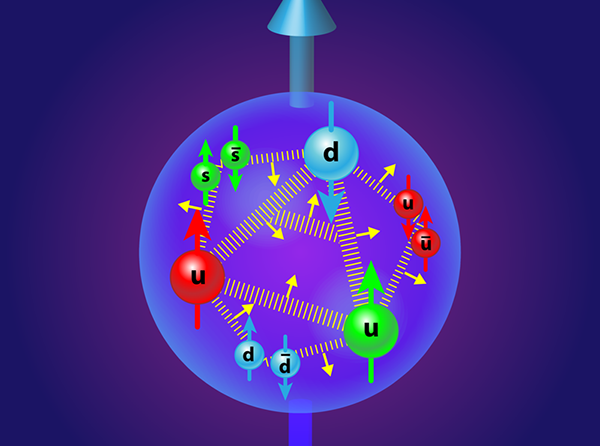 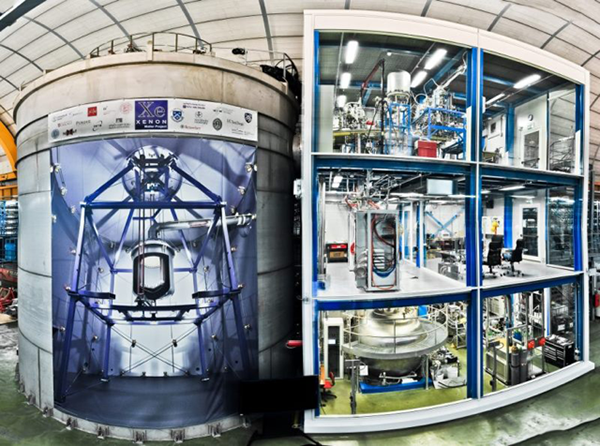 Of the many theories about dark matter, the most popular describes it as composed of weakly interacting massive particles (WIMPs). But this "favored" theory is now looking a little, well, less favored. In the last 16 months, the collaborations behind the world’s three largest dark matter detectors reported that they had observed no WIMPs in the theoretically expected mass range. The experiments all use mammoth vats of liquid xenon, which are scrupulously shielded to avoid false signals from cosmic rays, to spot a WIMP’s interaction with regular matter. Writing in January about the null results from the LUX experiment in the U.S. and PandaX-II in China, Jodi Cooley said that some physicists had started to question the simplest WIMP model (see the Viewpoint Dark Matter Still at Large at physics.aps.org/articles/v10/3). By October, when XENON1T in Italy (2000 kg) and PandaX-II reported that their more sensitive WIMP searches had also come up empty, Dan Hooper said that dark matter research was in "a state of major disruption" (see the Viewpoint The Relentless Hunt for Dark Matter).

The term "topological" often conjures up images of donuts and pretzels, but condensed-matter physicists know that recognizing topological phases is harder than sorting pastry items. To help them out, researchers from Cornell University devised a machine-learning-based method for determining if a material is topological or not (see the Viewpoint Neural Networks Identify Topological Phases). The idea of using machine learning in condensed-matter physics is not new. Researchers have trained neural networks to spot local order, such as a magnetic alignment of spins. However, topological materials have nonlocal order that is less easy to pin down. To make the identification easier, the team developed a computing protocol to transform system information, such as the many-body electron wave function, into an image that could be fed into a neural network. They applied such a protocol to different insulators, showing that it could identify which systems hosted a quantum Hall topological phase.