Editor’s Note: This article is adapted from the winning entry in the APS Forum on the History of Physics Essay Contest.

Fusion energy research involving confinement of plasma with magnetic fields is the story of a relatively small group of scientists pursuing a paradigm-changing goal while knowing it would most likely not be achieved during their lifetimes. This is less true today than it was 60 years ago, and the field owes a debt to the determined pioneers of the General Atomics (GA) fusion program who persevered through politics, budget cuts, and others’ lack of interest in their research. Among those pioneers are Tihiro Ohkawa (1928-2014), a lauded leader, innovator, and risk-taking scientist; and Torkil Jensen (1932-2004), a man whose name is always spoken with a soft undertone of awe inside the gates of GA but seldom mentioned outside the campus save for the innovation award that bears his name. Ohkawa was a powerful visionary with drive to build; Jensen was a kindhearted mentor and innovator [1]. As a pair, the impact they left on the fusion program at GA and the world is rich and lasting. 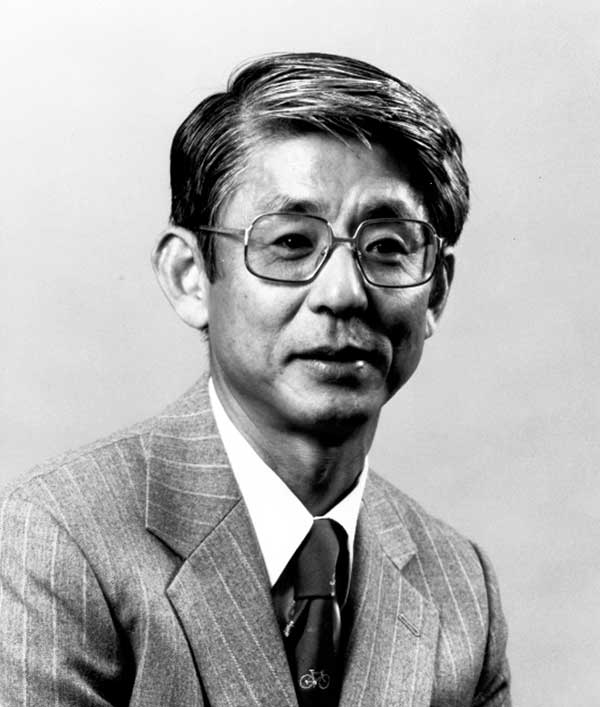 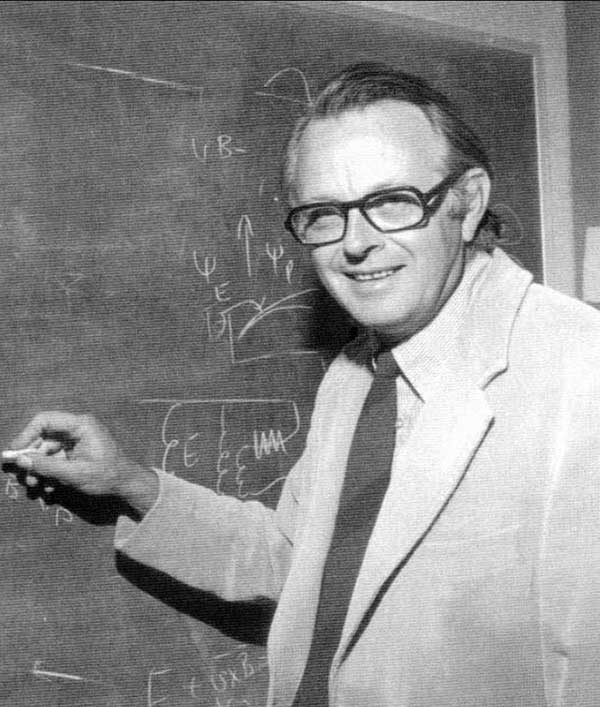 Ohkawa was the inaugural vice president of the GA fusion program and his name is the first to appear on many public histories and publications from the company. He saw the future machines he wanted to build and pursued them single-mindedly. As an accomplished scientist when he arrived at GA, his team complemented him well—none more so than Jensen, who with his softer friendly style and critical intuition exposed and patched any shortcomings in Ohkawa’s experiments. Together the pair operated by proposing unusual ideas, defending them vehemently until implemented, then once proven correct, repeating the process. Their research was relevant not only during their lives, but survives today in the designs and approaches of international fusion programs and in the minds of the students they mentored who are now some of the leaders in physics within and outside of fusion.

From 1957 until 1965 fusion at GA (then General Dynamics) was supported by the Texas Atomic Energy Research Foundation (TAERF) [2]. Ohkawa and Jensen arrived in 1960, the former from the University of Tokyo and the latter from an electrical engineering research assistantship in his native Denmark. In 1962, Ohkawa assumed the role of primary experimentalist for fusion research. Jensen began at GA familiarizing himself with basic plasma research through a smaller effort on a phenomenon called Landau damping. In 1965 the contract with TAERF ended and the GA fusion program, because of budget and disillusionment, dwindled to 14 scientists who needed to come up with something notable to survive [3].

Around this time, scientists at the Princeton Plasma Physics Laboratory (PPPL) were struggling with their Model-C stellerator, which lost confinement as the plasma diffused across magnetic field lines. Ohkawa managed to secure funding from the Atomic Energy Commission (AEC) to build a machine called the DC Octopole that, although not confining the plasma well, did show diffusion several hundred times lower, and brought enough renown to GA to secure more funding [3].

In 1968 impressive progress by Russian researchers in achieving improved confinement time and higher temperature steered the direction of fusion research worldwide towards the tokamak, including at GA with an important twist [4]. Instead of a traditional circular tokamak, Ohkawa put forward the unorthodox idea of the "plasma-current multipole" or doublet. The doublet was a strongly shaped plasma that used two separate currents to create a "figure 8" in the magnetic equilibria (see the diagram). Doublet-I (DI) was a small-scale (8 cm major radius) proof-of-concept model built with thick, shaped copper walls to allow better inductive control, and was so successful it operated for only three months before Ohkawa secured funding for the much larger Doublet-II (DII). 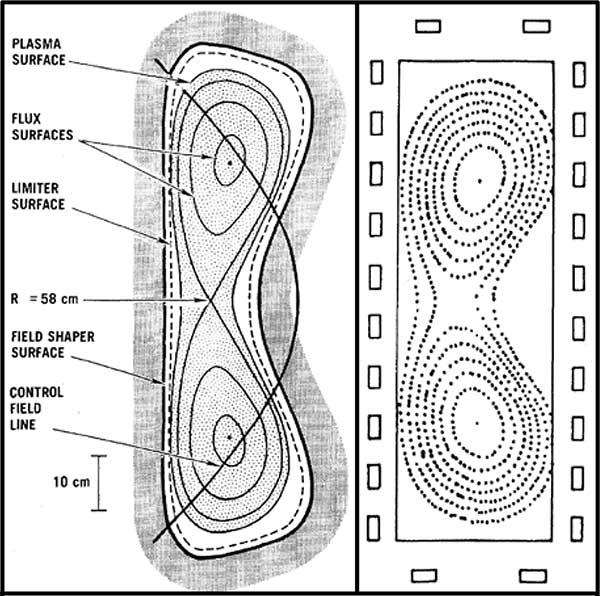 DII was successfully built, ran for two years, and demonstrated longer confinement times with a higher β (the ratio of plasma pressure to magnetic pressure) than comparable tokamaks [4]. Because Ohkawa and most of his staff were working on the DC Octopole, Jensen was placed in charge of many of the operations for DII; there he made some of his most important contributions to magnetohydrodynamic (MHD) theory, such as proving that elongated plasmas achieved inherently better β. Eagerly pressing onward, Ohkawa proposed and built Doublet IIA (DIIA) hoping to show that the large conducting wall, which facilitated eddy currents to correct changes in plasma shape, could be replaced by external shaping coils around a thinner vacuum vessel wall. Designed by Teuro Tamano and troubleshot by Jensen, the shaping coils were a significant step forward in active control of plasma; they forced GA’s scientists to develop advanced control techniques which would become the basis of the modern-day plasma control system.

As DIIA met its objectives, Ohkawa, with the aid of his team of theorists, proposed the significantly larger Doublet III (DIII) in 1974 and construction was completed in 1978. Because DIII was designed as a doublet, it possessed many shaping coils which would prove crucial to its impressive capabilities and versatility in both older and present-day experiments. After the installation of a Neutral Beam Injector heating system, DIII’s last great achievement was to create and validate a high-confinement mode plasma discovered in 1982 on the ASDEX in Germany, and now crucial to a the design of fusion reactors. In 1984 the DIII machine, under the supervision of John Gilleland, was upgraded to a D-shaped vessel (nicknamed "Big Dee" by the scientists) to achieve even higher β, closing the chapter on doublet research at GA.

During the heyday of this research at GA (1968-1984), the foundations were laid for a long-lasting energy program that included the training of a new generation of plasma physicists. Spurred by political forces in the late 1970s, the newly created U.S. Department of Energy (DOE) assumed the funding and research roles of the AEC [3]. The new DOE was eager to drive the U.S. towards energy independence through a diversity of energy assets including fusion.

Because of the tremendous amount of capital required to build energy research sites, Ohkawa saw an opportunity and appealed to the DOE for the funding of continued research studies on DIII-D, with the implied promise (carried out by Jensen) that GA would train plasma physicists. Jensen operated as a universal sounding board for ideas from his peers, and during his entire time at GA he always had a mentee. The impact of Jensen’s emphasis on mentorship is evident in modern-day GA culture, as the company sometimes privately funds researchers to study DIII-D, and actively recruits undergraduate students into fusion research.

While Ohkawa went on to become a vice chairman of GA, Jensen continued as senior technical advisor, always lending his aid and ideas on new approaches to research and training his mentees. Jensen continued to work and publish papers at GA even after his official retirement in 1994. His influential engineering ideas laid the foundation for Lang Lao’s EFIT code, used ubiquitously in fusion research to find the magnetic equilibria in a tokamak, and the concept of "almost ideal MHD," a constraint on the equations that allows for magnetic reconnection. Moreover, he helped create the induction motor model of plasma rotation, which is still used as an straightforward explanation for how a tokamak starts and how the plasma rotation is affected by currents and fields.

To this day, DIII-D remains one of the most capable tokamaks for the investigation of the effects of shaping on confinement. Its success has influenced the design of other programs that have followed and currently serves as America’s premier tokamak, devoted to establishing the scientific basis for the next generation machine, and the largest tokamak in the world, ITER. 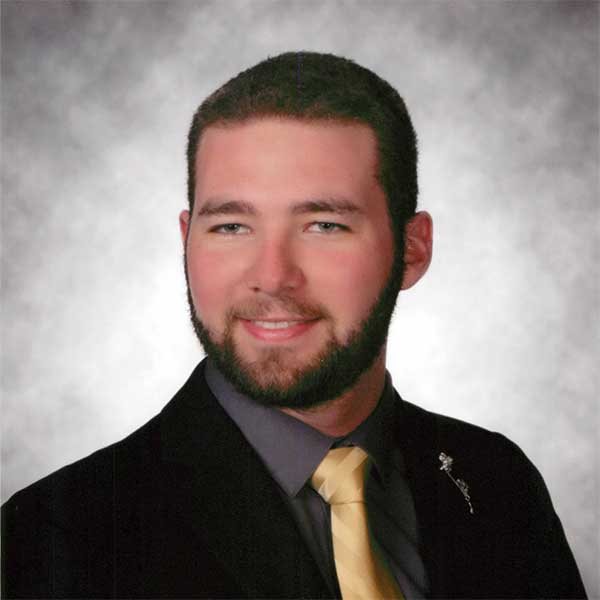 The author is a first-year Ph.D. student at The College of William and Mary in Williamsburg, VA. His interest in fusion began through a 2016 Summer Science Undergraduate Laboratory Internship at General Atomics in San Diego, CA. During that summer he researched energetic particles on the DIII-D Tokamak, and this experience guided him towards a research career in fusion energy and intrigued him to learn more about the history of the science. The full version of this essay can be found on the FHP website.