On October 18, the Mid-Atlantic Senior Physicists Group (MASPG) celebrated the 20th anniversary of its founding. As MASPG’s founder, I presided over the celebration, which included servings of a sheet cake with lettering: “APS/MASPG 20 years!”

In September 1997, Judy Franz, former Executive Officer of APS, and I moderated a brainstorming session with about 50 physicists that lasted two hours. The session generated a long list of ideas in response to the question of what would an organization of retired (or senior) physicists do? What issues would it consider? After the brainstorming session we enlisted eight or ten of the participants to meet as an informal planning group in October 1997. 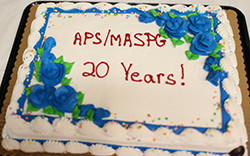 Since that initial meeting the Planning Group has arranged talks and tours, and it continues to make plans for the MASPG's future events. It is an informal group that is open to any interested party. In practice, about ten people have consistently participated. It meets on the first Wednesday of the month at 1:00 p.m. in the fourth floor conference room at the American Center for Physics, College Park, Maryland.

To help celebrate the group’s 20th anniversary, on October 18, Jonathan Keohane of Hampden-Sydney College spoke to the MASPG on the physics and history of magnetism. On November 15, Stephen Jefferts (NIST Boulder) will discuss the history of atomic clocks, time and frequency. John Mather (NASA/GSFC) will provide an update on the James Webb Space Telescope project on December 20. The MASPG-sponsored talks are typically held on the third Wednesday of the month (except in July or August) at the American Center for Physics.

Over the past 20 years the MASPG has hosted almost 200 talks on a wide range of topics in physics and related sciences. A few examples of topics and speakers are: “Studying Superfluidity with Ultracold Atoms” by Gretchen Campbell, “Neutrons at N.I.S.T.” by Dan Neuman, “Why do Black Holes Shine?” by Christopher Reynolds, “Coevolution of the Geosphere and Biosphere” by Robert Hazen, and “Global Warming 56 Million Years Ago” by Scott Wing. The web site at aps.org/units/maspg has an extensive list of past talks and includes copies of many presentations.

The MASPG has also sponsored tours of science facilities in August. They have included a trip to the National Radio Telescope at Greenbank, WV, a visit to the Radio and Television Museum in Bowie, MD, and a tour of the NIST Center for Neutron Research in Gaithersburg, MD to cite just a few.

APS has supported the MASPG since its founding by providing facilities for meetings and talks, maintaining the website and membership list, and sending announcements of talks and other events. The MASPG is very grateful for this support. To receive announcements of future talks and other events sponsored by the MASPG, you may contact the APS Membership Department at membership@aps.org or 301-209-3280 to add your name to the mailing list.

The author earned his B.A. from Pomona College, followed by an M.A. and Ph.D. from University of California, Berkeley. Following his doctorate he worked at the National Bureau of Standards (as it was named then) in Boulder, Colorado, and then at the U.S. Department of Transportation until his retirement in 1996. He has chaired the MASPG since its founding in 1997.