November 1974: Discovery of the Charmed Quark

Quarks are just one branch of the family of particles in the Standard Model. But it was the discovery of the charmed quark in particular—discovered almost simultaneously by two different teams at two different accelerators, using different approaches and led by two very different men—that launched a series of breakthroughs collectively dubbed the “November Revolution.”

By the early 1930s, physicists thought they had a complete picture of the constituents of matter: electrons, protons, neutrons, neutrinos, and their corresponding antiparticles. But Nature threw them a curveball in 1936 with the discovery of the muon, a heavier version of the electron. It was so unexpected that I.I. Rabi famously declared, “Who ordered that?” As physicists continued to collide particles at ever higher energies, they discovered more and more particles.

It wasn’t until 1964 that a theoretical solution emerged. That was the year Murray Gell-Mann and George Zweig proposed that all these new particles were actually made up of different combinations of even smaller, more fundamental particles, dubbed “quarks” after a famous nonsense line in James Joyce’s Finnegan’s Wake. (“Three quarks for Muster Mark!”) They speculated about a possible fourth quark, but in 1970, Sheldon Glashow, John Iliopoulos, and Luciano Maiani made a specific prediction for its existence, to explain the absence of an expected particle interaction. This set the stage for the experimental discoveries to come.

At Brookhaven National Laboratory in New York, Samuel Ting was heading up a particle-hunting experiment that involved shooting high-speed protons into a beryllium target to produce showers of new particles, and then using a mix of magnetic fields and detectors to filter out interesting results.

Ting’s Chinese parents were visiting Ann Arbor, Michigan when their son was born prematurely, making him a U.S. citizen. They returned to China, but the Japanese invasion interrupted his education. He was largely home schooled until the age of 12, under the watchful eye of his grandmother. At 20, he returned to the U.S. to attend the University of Michigan, completing his Ph.D. in 1962. He became a professor at Columbia University, and then joined the faculty at MIT. His group used the Alternating Gradient Synchrotron (AGS) at Brookhaven for their experiments, since its accelerator could produce higher energies. 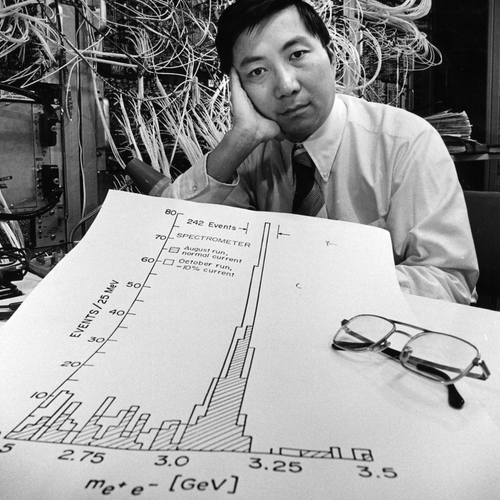 Meanwhile, across the country at Stanford University, Burton Richter headed up the team hunting for quarks. Born in 1931 in Queens, New York, Richter began his undergraduate studies at MIT unsure whether he wanted to study physics or chemistry, but soon chose the former. He stayed at MIT for his graduate studies, and eventually ended up in particle physics. After completing his Ph.D., he joined the faculty of Stanford University, where he soon became involved in building an 80-meter diameter accelerator called SPEAR (Stanford Positron Electron Accelerating Ring). Completed in 1973, it was capable of accelerating counter-rotating electron and positron beams up to four billion electron volts. 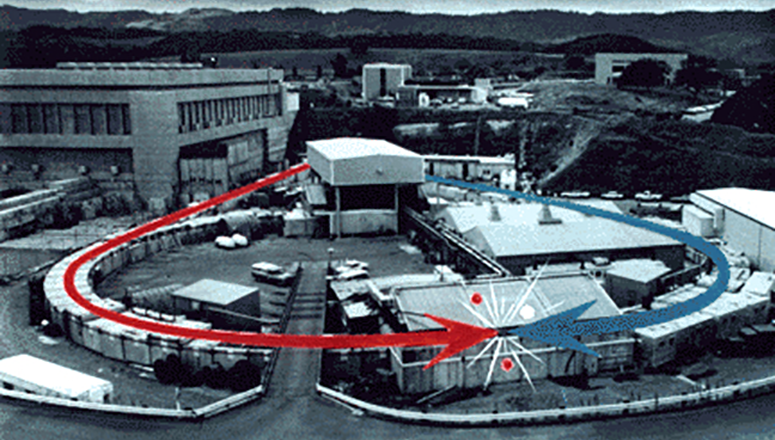 The SPEAR machine at Stanford

The accelerator at Brookhaven accelerated protons. But protons are not fundamental particles; electrons are, and Stanford physicists thought they would make for a much better probe. A carousel-like storage ring accelerated a stream of electrons and a stream of positrons in opposite directions and then made them collide to produce showers of new particles from the energy of the collision. The beam was directed to what was basically a scaled-up version of Ernest Rutherford’s original scattering experiments, in this case using liquid hydrogen and deuterium as targets.

Over the summer of 1974, both teams independently spotted their prey. Since quarks cannot exist on their own, the discovery came in the form of a meson comprising a charm and anti-charm quark. At SLAC, Richter’s team spotted a massive spike (resonance) in the data indicating the presence of a new particle—the charm quark. And it had a much longer lifetime than expected.

Richter and Ting compared notes at a November meeting at SLAC and realized their respective teams had both discovered a fourth flavor of quark. They quickly made a joint announcement, and the two teams published papers a week or so later detailing their respective discoveries. Richter had dubbed his the “psi particle, since its decay pattern involved four particles curving in the magnetic field to form something that looked like the Greek letter psi. Ting called his the J particle,” since that letter resembled the Chinese symbol for his name. They compromised and combined the two, so the charm quark is officially the J/psi particle.

Richter and Ting shared the 1976 Nobel Prize in physics, “for their pioneering work in the discovery of a heavy elementary particle of a new kind.” With this discovery, there were now two complete generations of particles: the first—the electron and the up and down quarks; the second—the short-lived muon, charm, and strange quarks.

But nature had a few more surprises in store. Within a few years, SLAC scientists discovered the tau lepton, setting off a search for two more flavors of quark. Fermilab’s Tevatron accelerator found the bottom quark by colliding protons with a stationary target at even higher energies, and examining their statistical data for telltale “bumps” indicating the presence of an upsilon (made up of bottom and anti-bottom quarks). They succeeded in 1977. But it would take nearly 20 years for Fermilab’s scientists to produce the elusive top quark: that didn’t happen until 1995, and it proved much more massive than originally expected—as heavy as a gold nucleus.

As for the charm quark, it continues to surprise scientists. In 2002, Fermilab’s SELEX collaboration announced they’d detected a singly charged, doubly charmed particle, made up of a down quark and two charm quarks. The catch: other experiments have since failed to produce any more such particles. And just this year the LHCb detector at the Large Hadron Collider in Switzerland discovered a rare combination of particles: a doubly charged, doubly charmed Xi particle, comprising an up quark and two charm quarks. LHCb’s particle also has significantly higher mass than that detected by SELEX. Either one result is wrong—and both analyses were very careful and clean—or it may be that some theoretical tweaking is in order to account for the discrepancy. Who knows what other secrets the charm quark might be hiding?