From Laser Explosions to Feynman Diagrams: Science Comics at Comic-Con

Walk through the exhibit hall at the 2017 Comic-Con International in San Diego, California, and among the 130,000 attendees, you might bump into Wonder Woman, Rick & Morty, or Batman. And along with other small press publishers, you’ll find a booth dedicated to the APS comics series Spectra and her adventures as a middle-school physics superhero. Written by APS Head of Outreach Rebecca Thompson and illustrated by different artists, Spectra first came to Comic-Con in 2010.

This year APS debuted the ninth issue of Spectra, titled “Sonic Surprise.” But science comics are catching on, and at the 2017 Comic Con, Spectra had company.

“I thought I might as well email Brad Pitt.”

In 1997, while working on his doctorate in robotics at Stanford, Jorge Cham created the comic Piled Higher and Deeper (PhD), a satire on graduate study in physics. Eventually, after a few years as a lecturer and research associate at Caltech, Cham decided to go into comics full-time, creating two feature-length movies and several lecture series.

Then, in 2008, Daniel Whiteson, an experimental particle physicist from the University of California, Irvine, emailed Cham about the possibility of collaborating on science comics for physics outreach.

After Whiteson read a comic by Scott Cloud about the development of Google’s Chrome browser, he realized the potential of comics as a medium. “I’m not interested in browser development at all, but with this comic I could understand why they did it,” he explained.” I was impressed that they could cover a dry dusty topic so well in a comic. So, I thought, if they could do that for browsers, we could definitely do it for something sexy, like the Higgs boson.”

After trying his hand at creating comics himself, Whiteson realized he needed to collaborate with an experienced comics artist. “My wife said, why not email Jorge Cham? … I thought I might as well email Brad Pitt and ask him to do a movie about me,” Whiteson said. But, “it turns out Jorge does answer his email!”

The two ended up collaborating on two animated videos for the PhD Comics website: one about dark matter and another about the discovery of the Higgs boson in 2012.

This spring, Cham and Whiteson co-authored an illustrated book, We Have No Idea, focusing on open questions in physics. “Approaching physics from the point of view of what we don’t know, looking for where exactly is the edge of knowledge, that really helps each chapter move forward,” Cham said.

Cham also felt that his 20 years of experience writing PhD Comics impacted the way he co-wrote the book. “In our writing, I think there’s a certain amount of casualness and irreverence [about science],” Cham said. “I think a lot of science books out there approach the topic with a lot of reverence and ‘oh, the cosmos, and oh matter, oh the universe’ ... as in, this is what we know and you should just appreciate what we know.” Whereas Cham sees that “you don’t have to approach science so seriously.”

As for Whiteson, he connects the efficacy of science comics with the practice of physics itself. “We already use an idea that's like comics in physics, the Feynman diagram,” Whiteson said. “Sometimes an explanation with a doodle is much more precise, much more persuasive than just an equation.” When he explains concepts to his students, Whiteson said, he can’t do it without doodling a little comic to help students visualize what he’s saying.

Whiteson emphasized the importance of collaboration with a creative professional.

“Not all scientists are excellent communicators, and many don’t have artistic skills like Jorge [has]. So we can really benefit from finding people in the artistic community to collaborate and work with,” Whiteson said. “I think there might also be other venues and other creative media that we could tap into, not just comics.” Before his first comic collaboration with Cham (the Dark Matter comic/video) went live, Whiteson was very nervous about the potential response from the scientific community.

“Any time you are explaining science to the general public, you’re going to have make some simplifications … To my surprise, we got overwhelmingly positive feedback … other physicists were happy to have [their] work described by Jorge … it was like, "we have our moment in the sun!’”

Comic books vs. textbooks: how to share physics with kids.

While PhD Comics tackles the graduate world, many science comics are targeted at K-12 audiences—and specifically, middle school readers. One Comic-Con panel discussed the advantages of comic books over traditional text-based ways of learning. Panelist Rebecca Thompson from APS narrowed down some of her specific experiences writing the Spectra comics.

“In Spectra 6, Spectra battles the Quantum Mechanic. So, it was a lot of figuring out what introductory quantum mechanics I wanted to present, how I could present it, and how I was going to do so in a way with the least pushback from other physicists,” Thompson said.

“Because that is one of the huge barriers,” Thompson said. As a Ph.D. physicist herself, she described how she sometimes needs to train other scientists that, in science communication “There is such a thing as good enough. If we go back to the dawn of time and get everything exactly right and make sure we’re explaining it to the point that [some physicists] want, nobody’s going to listen.”

Thompson explained that sometimes scientific communicators are asked to add more scientific depth to an explanation by adding just one word or one equation to a more basic explanation.

“One of the problems I’ve run into—and I think a lot of science communicators run into—is that sometimes, adding one word can be hugely detrimental … Teaching other scientists that the more important thing is how it’s perceived, not how it’s said, is very difficult … when you use words like “theory” or “98% agreement,” when you start hedging in the way you need to in science, all of the sudden the public’s experience is totally different than what you’re trying to put out there,” Thompson said.

When physicists use "theory" or "98% agreement," they are using technical language that reflects instrumental and mathematical limits and categorization. But "theory" and even "percentage agreement" are also non-technical terms used in everyday conversation that can mean something closer to "guess" or even "gossip."

Because Spectra comics are specifically written for middle-schoolers, she finds that if she gives a copy of a comic to a scientist’s child, “what happens is that this kid will just randomly, very intelligently start explaining how a laser works to their parents,” Thompson said. “That’s been effective, because when it comes from kids … it’s easier to see that this kid has more knowledge [from the Spectra comic] than they [had before],” Thompson said. 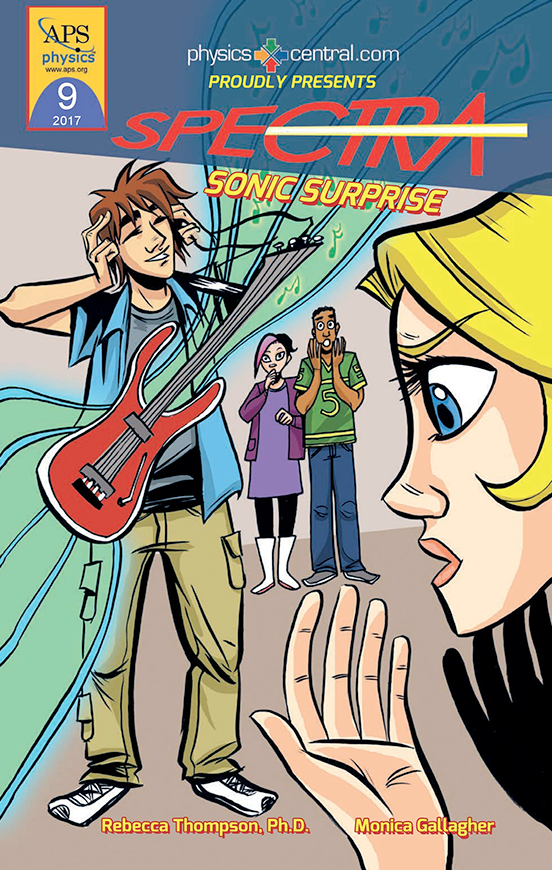 There’s science in the images.

Science Comics is a series by First Second Books, a graphic novel publisher at Macmillan Inc. The series began in 2016 with three educational/entertainment graphic novels each about 100 pages in length—Dinosaurs, Coral Reefs, and Volcanoes. In May 2017, Science Comics landed on physics and engineering with a novel covering the history of flight, Flying Machines.

Author Alison Wilgus worked with a team to writer the book; A film-and-television NYU graduate, Wilgus worked in animation for Cartoon Network and other channels while creating her own webcomics and science fiction.

By Wilgus’s count, she ended up explaining in the book at least several concepts to do with physics, including why and how an airplane’s wing needs to be curved to provide lift, and how a propeller works.

She says that she did an enormous amount of research for the project, but not having preconceptions was a benefit. “The less I knew about something, the less likely I was to get confused and accidentally incorporate bad information,” Wilgus said. She also emphasized the importance of using as simple language as possible. At one point, she said, she had used the word “parabolic” to describe a plane’s arc, and she and First Second’s fact-checker realized she should just say “curved” because, as Wilgus said, “parabolic describes a very specific thing.” Wilgus said during the panel that people who criticize science comics tend to concentrate on the word bubbles and ignore the illustrations. I think a lot of people who are doing comics criticism are book people,”

Wilgus said during the panel, “and they just read the word balloons [in science comics] and barely look at the images, but not everybody reads comics that way, especially young people.”

“Instead,” Wilgus said, “young people look really hard at the images. And, in a lot of science/technology comics especially there’s an enormous amount of information, aggressively researched information, in those images … information that would take a long time to try to explain [with just words]. [The images provide] more context for the words on the page and all these things co-operate with each other to provide a fuller picture.”

The author is a freelance writer in Minneapolis, Minnesota.