A lot can change in a couple of years. Not so long ago, my main concern about politics and public policy was how much R&D money would be in President Obama’s budget. This year, I found myself marching in the street dismayed by proposed budgets that would lead to unprecedented cuts of federal funding for science and witnessing incomprehensible attacks from within our government on the scientific process itself.

As I write this, I’m running for re-election to a second term in the New Jersey Legislature, a body to which I am the only physicist ever elected. It has been quite a journey for someone whose “day job” is at the Princeton Plasma Physics Lab, where I started out as a postdoc performing fusion-energy research.

When people hear about my two lives, it strikes them as Jekyll- and Hyde-like. How could someone grounded in fact- and evidence-based research find the world of political spin and issue-avoidance the least bit comfortable? But that’s the point. It’s not about comfort; it’s about bringing a scientific approach to decisions that affect every aspect of our lives. 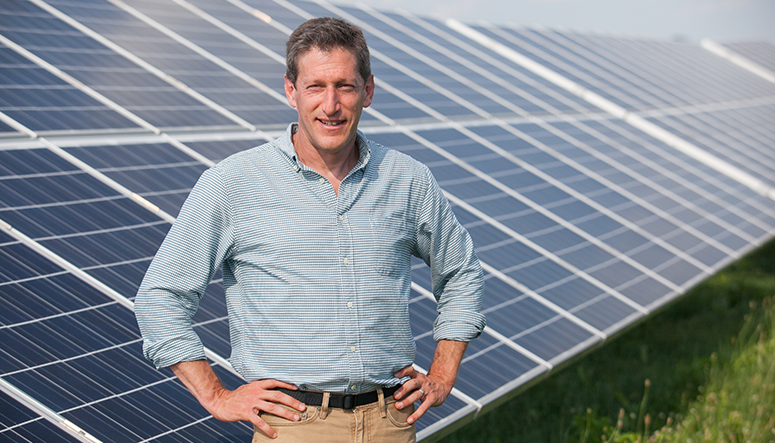 Carl Sagan once wrote, “In science it often happens that scientists say, 'You know that's a really good argument; my position is mistaken,’ and then they would actually change their minds and you never hear that old view from them again. They really do it. It doesn't happen as often as it should, because scientists are human and change is sometimes painful. But it happens every day. I cannot recall the last time something like that happened in politics...”

As scientists we are, by nature and training, perpetually skeptical yet constantly open to new ideas. We are guided by data, by facts, by evidence to make decisions and eventually come to a conclusion that we immediately question. We strive to understand the “big picture,” and we understand the limitations of our conclusions and predictions. Imagine how different the political process would be if everyone in office took a data-driven, scientific approach to creating legislation instead of one based on who can make the best argument for a particular version of the “facts.”

I live in a state with a rich history of innovation. New Jersey has been home to Thomas Edison and the light bulb, Bell Labs and the transistor; 14 of the 20 largest pharmaceutical companies have significant operations here. We have the highest density of scientists and engineers in the country, one of the finest K-12 public education systems in the country, and great research universities. But we also have a governor who pulled us out of the Regional Greenhouse Gas Initiative, claiming that the then-ten-state compact’s cap-and-trade approach to reducing harmful carbon emissions is “gimmicky” even though it had resulted in nearly $30M towards 12 large-scale energy efficiency and renewable energy projects within NJ.

From my perspective, we have key members of Congress and the Administration with an anti-science attitude, with the result that meeting important scientific challenges has become the spark for political battles, with one group on the side of truth and legitimate inquiry and the other not only living in abject denial, but wanting that studied ignorance to be the basis of crucial policy decisions. There are many deeply troubling examples to choose from, whether it is bringing a snowball onto the floor of the U.S. Senate to “debunk” climate science in 2015 or announcing that climate scientists from the Environmental Protection Agency scheduled to speak at a conference on the “State of Narragansett Bay and Its Watershed” are forbidden from presenting their scientific work.

Many of our political leaders on both sides of the aisle have lost their ability to understand that federal investment in research is a key driver of our “innovation economy” and creates thousands of jobs while keeping the U.S. as a world leader in important discoveries in medicine, renewable energy, advanced manufacturing, and more.

Instead, we are now in a moment of history where we have to stand up and say “I believe in science,” even though we all know, as Neil deGrasse Tyson has said, “The good thing about science is that it is true whether or not you believe in it.”

What is going on?

Well, I can tell you for sure that the problem isn’t that there are too many scientists in politics.

One thing to note is the background of our elected leaders. The number of members of Congress who identify their professions as lawyers, business people, or career politicians is at an all-time high. There are a handful of physicians, a few engineers and just one physicist, Rep. Bill Foster of Illinois.

Should we elect only scientists? Of course not. But one way to get beyond today’s unproductively stalled state of affairs is to have more scientists and more critical thinkers in all levels of government—and in positions where their actions affect government.

Given that background, in 2014 I decided to do more than just think about these issues or complain about the deterioration of rational decision-making. As it turns out, I not only lived in the district of Rush Holt who, before he became the CEO of the American Association for the Advancement of Science, was the second physicist elected to Congress (Vern Ehlers of Michigan was the first), but I also work at the same lab as he did. I decided to run in the Democratic primary to succeed him, against three people with extensive political experience, even though I have never held public office.

This was not an easy decision. First, there was the consideration that running for political office is a full-time job and I would have to take a leave of absence from work. For many of us, our research is all-consuming and time-sensitive; stepping away is difficult. There was also the personal decision of entering a field that has a rather poor reputation and would involve not only an enormous amount of time, but also significant stress. Did I really want to be scrutinized, judged, and spend day and night campaigning?

After many discussions with my family and scientists who have both held office or run unsuccessfully for office the message was clear—Congressional seats open up rarely, and the opportunity to run for one, regardless of the odds, is even more rare. So it was now or never.

I didn’t win, but it was a wonderful experience that led to my candidacy for the New Jersey General Assembly the next year. Running for a legislative seat is about knocking on doors, showing up at Rotary Club meetings, church suppers, 5K charity races, and just about any other place where people gather. It’s about shaking hands, letting people look you in the eye, and sharing your thoughts in the few minutes allotted.

In other words, it’s a far cry from the lab. And I love it. You might think the more one immerses oneself in politics the more disillusionment would grow. But it was just the opposite. I came into contact with so many people—suburban homeowners and parents, recent immigrants, students going to college at night and working by day—who want to work hard, do what’s right, and get their piece of the American Dream in the process. They don’t think that should be too much to ask, and neither do I. Hearing their concerns, and trying to figure out ways to make their lives more secure was anything but disillusioning.

I can honestly say the campaign was (mostly) enjoyable, surprisingly stressful, and incredibly rewarding (earning my Ph.D. was easier). I met people I never would have met otherwise and talked about issues that they cared about—taxes, health care, gun control, job creation, the environment, and more. I tried to stay true to the scientific approach at all times. That stood out in the political arena and was greatly appreciated everywhere I spoke, whether it was on a lack of correlation between high-voltage power lines and cancer or the economic studies around raising the minimum wage.

For many people, knowing that I was a scientist was sufficient reason to vote for me because having more scientists in politics was that important to them. Even some Republicans and Libertarians supported me, typically because they were in a technical field and saw the advantage of a scientist representing them. And I’m sure there were some people with little interest in science who just felt my approach was sensible and refreshing.

On Election Night in 2015, all of that added up to a 78-vote win out of the more than 34,000 votes cast. You don’t need to be a scientist to know that is razor-thin. I became the first Democrat ever elected in New Jersey’s 16th Legislative District.

Since then, the pace has only quickened. Juggling my two jobs is no picnic, but I feel like I’m making a difference. I’ve had legislation passed that will help people, and I have a platform to speak out against science deniers while also showing the value—in my party’s caucus and on the floor of the Assembly—of seeking factual responses to pressing problems.

If you have ever thought of running for political office I would urge you to do so. I’ve talked to scientists all over the country about my experience as an elected official, campaigning on a platform of evidence-based decision-making, and about the stresses on my professional and personal life. I’ve also given a talk about my experience at universities, conferences, and to other organizations that I call, “The Physics of Politics.” But even if running in elections isn’t for you, it is important to get involved.

This is no time for people of science to sit on the sidelines. Get to know the people who represent you in government at all levels and let them hear your views. Volunteer to provide information or advice on issues that you know well. Talk to the public about science, enhance science communication and science teaching. Prepare the next generation of scientists.

We live in a time when long-held principles are under relentless attack. People have determined that an anti-science mindset is a path to power and influence. We should not have to relitigate facts, but we don’t always get to choose our fights.

Andrew Zwicker is the head of Communication and Public Outreach at the Princeton Plasma Physics Laboratory, and a member of the New Jersey General Assembly representing the 16th Legislative District. He is a Fellow of the APS, Past-Chair of the Forum on Physics and Society (FPS), was editor of the FPS newsletter “Physics and Society,” and was Past-Chair of the Mid-Atlantic Section. The views expressed here are strictly his own.