By day, Joanna Harper is a mild-mannered medical physicist working in a major medical center in Portland, Oregon. She spends most of her time in radiation oncology, working out how to detect cancer with CTs and MRIs. She does computer simulations of the patient treatment plan and then consults with the oncologists to help them determine the best course of action. “The goal … is to maximize the radiation to the tumor and minimize radiation to the surrounding tissue,” she explains. “There are a number of strategies that can be used to do that.” She also engages in quality assurance of the radiation devices. With a master’s degree in medical physics from the University of Western Ontario, Harper is well-positioned to take on these challenges.

Harper loves her job and she has been at it for more than three decades. “I think I chose a great career, because treating people correctly with radiation is an important thing,” she says. She especially enjoys the constant collaboration with her colleagues in the medical center. “For a physicist I have pretty good people skills,” she says with a laugh. “A lot of what we do is interact with the physicians and radiation therapists. This work is more than making measurements. Being part of the team is one of the things that has kept me in the field for 30 years.”

And this would be a fabulous story in and of itself, of a superstar who chased a traditional career in medical physics. But there is more to this story. On her own time, Harper has dedicated herself to another pursuit: Harper is a competitive runner and for over 40 years she has been competing in races that range from 1500 meters on the track to road marathons. “I am a good amateur runner but by no means a professional,” she says. “If I made my living off of running I would have starved years ago.”

Thirteen years ago she started thinking about fitness levels of male and female athletes and wondered if anyone had studied how a person’s fitness changes when they change genders. The catalyst for this musing was her own gender transition from male to female in 2004. Part of the process involved hormone replacement therapy, which blocked the production of testosterone and added estrogen in her body. The less testosterone her body produced, the more she lost the physical advantages of being male in her distance running. “I understood before I started my transition that with lower testosterone levels I would run slower, but I had no idea how quickly that would happen and how much slower it would be,” she notes. Within three weeks of starting the hormone therapy, her running pace and energy decreased, and by nine months, she was running about 12% slower than she had as a man.

As a physicist, she was curious about the mechanism behind this change in her fitness ability. Harper pored over statistics about fitness levels of male and female runners of different ages and found that as a 48-year-old woman (the age she was when she completed her transition), her running ability compared to other women her age was exactly in line with her previous running ability as a male athlete. While she was happy to better understand why her running economy had changed, she was curious about the fitness experiences of other people who transition.

“In 2007 I met another trans woman who was a distance runner and the exact thing happened to her,” says Harper. “And at that point I said ‘ah ha!’” She started collecting data on trans people who are runners and was able to gather 200 race times from eight transgender women including herself, with a goal of determining if transgender runners who transition from male to female have a competitive advantage. When she examined the runners in her study, she saw that they all had the same pace they should be running for their age as women. Therefore, they did not have a competitive advantage in running even though they had been male before. Her data collection began to blossom and soon she wrote a paper on the subject in the Journal of Sporting Cultures and Identities. She then parlayed this knowledge into pro-bono consulting for organizations like the International Olympics Committee and the International Association of Athletics Federations about how to appropriately regulate the participation of transgender athletes in sports.

Harper’s goals in bringing these issues to light are concretely related to her insights concerning misconceptions about transgender athletes. First of all, there is an erroneous notion that “transgender women will dominate sports because of unfair advantages they gain from their previous lives,” she says. But her own research has shown “that’s simply not going to happen.” As she wrote in an op-ed in the Washington Post in 2015, some people “can’t get past the idea that I’m a man trying to profit in a woman’s sport.” Additionally, people mistakenly think that transgender men, because of their previous lives as women, will be unable to compete. “This is not true,” she says. “There are trans men who are doing quite well athletically.”

“I hope to change public perception on transgender athletes,” she says. “There is a question of how do we decide who gets into women’s and men’s sports, and I feel strongly at this point that testosterone should be the tool we use to separate male athletes from female athletes. But there is a great percentage of the populace that is skeptical of that idea, and I hope that more research will support the testosterone separation of male and female athletes.”

Harper’s “hobby,” as she calls it, continues to expand, and most recently she has been involved in a court case concerning an intersex athlete who competed in the 2016 Olympic Games in Rio. She notes that this is a pivotal case regarding whether or not we use testosterone as the means to separate male and female athletes. She is writing a book about the science and history of gender variance in sports as seen through her personal lens. She is also collaborating with an athlete who is currently transitioning, and has been collecting as much data as possible about her athletic abilities as she makes the transition.

With a medical physics background, she has a distinct edge in this research endeavor. “Obviously physicists excel in pattern recognition and analyzing data,” she says. “There is probably no other profession better at logical thinking than being a physicist.”

Ultimately, Harper hopes her side gig will lead to a fairer system for transgender athletes to compete on the world athletic stage. As she wrote in The Washington Post, “I hope the mounting evidence, coupled with exposure to trans women athletes, will go some way toward changing hearts and minds. The rules established by different leagues are unnecessarily inconsistent, and prejudice persists at all levels of sport — from elite leagues down to high school teams.” Finally, “I would like to assert that those of us who don’t fit easily into the standard notion of male and female are just one more variety of human, and there is nothing to be feared or hated,” she says. “We just want to live and breathe and play sports like any other human being.” 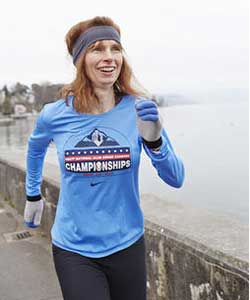