As physics students were ramping up for another academic school year, a few select seniors were enjoying one of the high points of their undergraduate careers: the APS LeRoy Apker Award Selection Meeting on August 23, 2017. Out of the seven finalists selected from the applicant pool, only two are chosen as recipients for the prestigious APS undergraduate award, which recognizes outstanding achievements in physics and demonstrated potential for future scientific accomplishment. On October 23, the selection committee will announce the winners — one to a student from a Ph.D.-granting institution, and one to a student from a non-Ph.D.-granting institution.

The judges praised all the finalists. “The talks were at a level far beyond what one might expect from an undergraduate,” said committee member Amy Graves of Swarthmore College. “These students spoke to us like peers, and exhibited a mastery of both the details and broad implications of their work. Several students introduced me to work that will impact my own research and teaching. Particularly impressive was the back and forth we were able to have with the speakers …”

Graves also emphasized that although these finalists are all jockeying for one of the two awards, they should recognize they are “already winners.” In addition to the honor of being invited to present their work in Washington D.C., each of the finalists received an honorarium of $1,000, and their institution's physics department received the same amount to support undergraduate research.

From numerical modeling to astrophysics, the Apker finalists gave enthusiastic presentations. Gregory Ridgway of University of Maryland, College Park, created an algorithm to facilitate difficult field theory computations. Amar Sehic of Colby College broke down the complicated mathematics behind conservation laws and symmetry transformations. Both Ridgway and Sehic emphasized the painstaking derivations that went into their research.

Another finalist, Calvin Leung of Harvey Mudd College, used fluctuating light sources from the Milky Way to create a “cosmic random number generator” that he used to test the famous quantum inequality known as Bell's Theorem. He was a main contributor to the research, which was featured in Physics Editor’s Choice in February 2017. And Ephriam Bililign of North Carolina State University took a hands-on approach, investigating the properties of granular systems by varying the position and amount of force applied to homemade granular packings.

Each student traveled different paths, and many of them are using their research presented at the Apker Selection Meeting as springboards: Angela Harper of Wake Forest University was recently named a Churchill Scholar, and she will continue her research on organic electronics at Cambridge University while earning a M.Phil in physics; Sylvia Biscoveanu of Penn State University won a Fulbright Scholarship and is headed to Monash University to continue her astrophysical data analysis for the Laser Interferometer Gravitational Wave Observatory (LIGO); and Arvind Srinivasan of St. Mary’s College is now a full-time physicist for the Naval Air Systems Command (NAVAIR), working on data sensing, holography, and infrared imaging. The remaining students are either pursuing their advanced degrees this coming fall or already have their first technical job.

The Apker award finalists all embodied the legacy of LeRoy Apker, who was an experimental physicist and an APS Oliver E. Buckley prizewinner in 1955. The award was endowed by his wife, Jean Dickey Apker, to recognize students who will likely leave behind a record of exceptional research and scientific curiosity.

Visit the APS Awards page to learn more about the LeRoy Apker Awards. 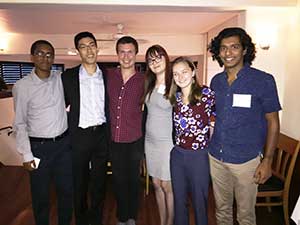