As the number of black hole merger observations continues to rise, astrophysicists may soon be able to figure out where these merging black holes come from. To date, the Laser Interferometer Gravitational-Wave Observatory (LIGO) has detected three gravitational-wave signals — each bearing the mark of a violent collision of two black holes that eventually became one. The estimated mass in these gravitational pile-ups is relatively large, suggesting that the two initial black holes may themselves have been the product of earlier mergers between smaller black holes. If this so-called hierarchical formation is at work, then it could leave an imprint in the rotation rate, or spin, of the final black hole. Fortunately, spin is one of the quantities that can be inferred from LIGO data. Assuming hierarchical formation, Fishbach et al. calculated the expected distribution of spins and found it skewed towards black holes with high spins, as reported in Astrophysical Journal Letters (DOI: 10.3847/2041-8213/aa7045). They showed that LIGO would only need about ten merger observations to determine whether or not all black holes formed hierarchically. 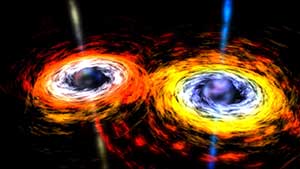 How black holes spin may reveal how they formed.

Squeezing Out the Petawatts

Claiming the latest prize in the high-power laser sweepstakes, a research team has used an all-optical technique to compress and amplify optical pulses down to less than 20 femtoseconds in a petawatt-scale facility. In Optics Letters, Zeng et al. (DOI: 10.1364/OL.42.002014) report their use of chirped-pulse amplification (CPA) to reach a peak laser power of 4.9 petawatts. CPA involves imparting a frequency sweep to the pulse then sending different frequency components along paths of various lengths. At the output, the components pile up into a shorter pulse. CPA is a standard method for shortening laser pulse durations, but the research team was able to implement the method with an all-optical amplifier system. Conventional amplifiers that use doped glass or sapphire are limited to one or two petawatts, but the laser-pumped parametric amplifiers used here can go higher. Zeng et al. used lithium borate crystals to boost the pulse energy from hundreds of millijoules to over 168 joules. The authors believe that with larger crystals they can triple the peak power to 15 petawatts — a power level with which they could study exotic states of matter under extreme conditions.

What is the propulsion force of a single swimming bacteria? Unless you’ve got a probe with a resolution smaller than their movements, you’re at a loss for an answer. Thanks to delicate nanofibers and nanoparticles, however, researchers have now been able to develop a compact device that can measure forces with a sensitivity on the subpiconewton scale (less than 1 trillionth of a newton). In a paper from Nature Photonics (DOI: 10.1038/nphoton.2017.74) Huang et al. described their optic force transducer (NOFT), which is made from gold nanoparticles bonded to a compressible glycol film coating a bed of nanofibers. Like a ball being pushed into a cushion, a stronger applied force on the nanoparticle causes it to move closer toward the fibers. The closer these gold particles are to the fibers, the stronger the optical signal they can emit. Thus the light intensity provides a quantitative force measurement. From calibration to detection, the NOFT platform was able to successfully detect forces associated with the swimming action of bacteria, not to mention small acoustic signatures from a beating heart cell. The team hopes to implement this compact device in microorganism environments for use in biomechanical and intracellular studies.

An atomic force microscope (AFM) tip wiggles a bed of nanofibers; the oscillation is detected with light from a nanoparticle (NP).

Juno’s first lap around the Milky Way’s jovian giant in August 2016 was a milestone in space exploration. Hovering less than 5000 kilometers above the surface of Jupiter, the NASA spacecraft collected a plethora of observational data, which scientists have analyzed to better understand the ins, outs, and in-betweens of the gas planet. Two papers in Science, one by Bolton et al. (DOI: 10.1126/science.aal2108) and other by Connerney et al. (DOI: 10.1126/science.aam5928) reported the highlights of Juno’s initial discoveries — confirming some speculations and defying some modeling predictions. To name but a few, the pole-to-pole fly-by painted a picture of cyclones (counterclockwise areas of rotation) clustered at the poles, and an Earth-like "weather layer," a giant area of circulation hundreds of kilometers below the ammonia cloud tops. Infrared and thermal images confirmed the theory that hot spots are dry regions of the upper atmosphere, but Juno’s magnetometer debunked the predicted magnetic field of Jupiter — finding a value of nearly eight gauss, almost twice as strong as expected. Particle instrumentation on board the spacecraft measured electron and proton populations within Jupiter’s ionosphere, magnetosphere, and auroras, revealing the physical mechanisms in each. Juno’s next close fly-by on July 11, 2017, will hover over Jupiter’s iconic giant red spot, where NASA scientists hope to peek below the swirling crimson cloud tops. 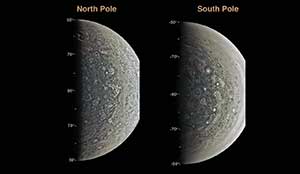 Putting Weyl Materials to Use

New work indicates that an unusual kind of semimetal discovered in 2015 could be used to build a range of electronic devices, from transistors to superlenses for electron microscopy. These solids host electronic excitations known as "Weyl" fermions that act like massless particles similar to photons. Researchers have speculated that these exotic materials could be used in nanoelectronics, spintronics, or quantum computing. Writing in Physical Review B (DOI: 10.1103/PhysRevB.95.214103) Hills et al. have presented a theoretical analysis of three possible applications of Weyl semimetals. The authors found that a structure made of multiple layers of Weyl semimetals should have a negative refractive index for electrons traveling through it. Such a structure would act as a lens that is able to focus a scanning tunneling microscope’s electron beam beyond the limits imposed by diffraction. They also suggest that Weyl semimetals could be used to build transistors potentially smaller and faster than conventional silicon transistors. Finally, their calculations reveal that an applied pressure could cause electrons in a Weyl semimetal to propagate similarly to light moving near a black hole. (For more, see the Viewpoint by Adolfo Grushin and Jens Bardarson in Physics "How to Make Devices with Weyl Materials" at physics.aps.org/articles/v10/63).