To Disperse, or To Not Disperse: Debating "Negative Mass"

The phenomenon is subtle, and some news sources inaccurately described the paper as heralding the advent of a fluid with "negative mass." Some headline writers, connecting the results with warp drives, antimatter particles, and the end of "physics as we know it," had many physicists wagging their fingers.

"Undeniably, a number of news outlets sensationalized the results," Peter Engels and Michael Forbes, senior researchers on the experiment, told APS News. "[This was] mostly due to a confusion [with] mass … and the incorrect implication that our fluid could exist in empty space … "

But some media, including BBC, Live Science, and The Guardian, contacted Forbes and Engels about the results, and appropriately interpreted the physics. "A number of news outlets actually did their research." 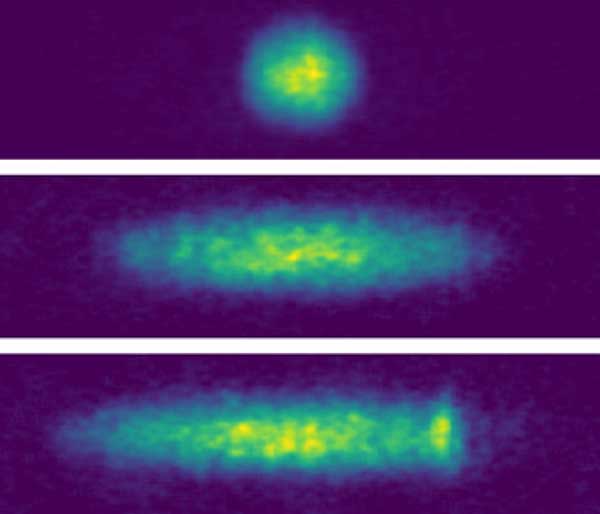 By tuning the spin-orbit coupling in a Bose-Einstein condensate (top), the expansion of the atomic cloud (middle) can be stopped in a region of "negative" mass (bottom).

How to define mass, and the difference between "negative mass" and "negative effective mass," was a topic that Engels and Forbes often had to clarify to reporters. Creating a fluid with "negative mass" is technically correct, they said, but only if "mass" is interpreted in a specific way.

"One main confusion by some of the media was interpreting the term ‘negative mass’ [as] negative gravitational mass, which indeed could have drastic consequences," Engels and Forbes said. The correct concept is the "inertial mass," they emphasized, which is what we think of in Newton’s second law: If you push an object, how does it accelerate? In fact, all inertial masses are "effective masses" by definition, since the term describes what someone actually observes.

In the experimental setup, Khamehchi et al. used a high-tech suite of lasers to trap, cool, and manipulate the BEC by tuning the "spin-orbit coupling," which is an interaction between an atom’s spin and its motion.

When one of the crossed laser beams used to trap the atoms was switched off, the BEC was allowed to expand along one axis. When they filmed this controlled expansion in the lab, a region appeared where the fluid hits an "invisible dam," slowing the condensate from dispersing further in the direction of its momentum.

The reason for this sudden block goes back to the dispersion relation in quantum systems, which relates the total energy of the system, E, to the momentum of the system, p. This relationship can be altered, using a second set of lasers and the spin-orbit-coupling technique to create an asymmetrical relationship between E and p. As a result of this alteration, there exists a small region of negative curvature in the dispersion relation — and in the experiments, this is equivalent to negative inertial mass occurring at certain values of the velocity. When the condensate nears and then enters this velocity regime while dispersing, the expansion first slows, and then reverses.

"The negative mass results from the spin-orbit-coupling lasers," explained Forbes. "These alter the momentum of the atoms, shifting the dispersion relationships. Because of this shifted relationship, atoms moving at higher speeds are more strongly affected by the lasers, resulting in the velocity-dependent negative effective mass."

The fluid’s pileup, which might appear to defy physics, is just an innovative use of the dispersion relation in a BEC. But this peculiar result has caught the eye of other atomic and molecular physicists. At the 48th APS Division of Atomic, Molecular, and Optical Physics (DAMOP) Meeting, an entire session was devoted to spin-orbit coupling in cold gases, where quantum researchers gathered to share their ideas of next steps forward in the field.

"We’ve noticed that this has brought about a nice discussion within the community about the meaning of masses," Engels said at the DAMOP meeting. "It’s nice that it gets people thinking about what is mass, why we call it effective, and [if it] make sense to call it negative."

He mentioned a recent commentary article published in Physics Today on why physicists should take the idea of negative mass seriously. The author, Manu Paranjape of the University of Montreal, wrote that the debunking of negative gravitational mass dismissed the possibility of negative mass altogether, whether inertial or effective.

"The term is very specialized … even physicists who know the term and know what it is don’t realize the term for fundamental mass [is] effective [mass]," added Forbes.

Looking forward, many physicists in the field are hoping use BECs to test the theory behind the Forbes and Engels experiment. The Excitations in Degenerate Quantum Gases session at DAMOP featured talk of soliton trains, quantum turbulence, and the dynamics of BEC’s in different types of traps. "We’ve done all of this analysis with Gross-Pitaevskii [simulations], but then there’s a quantum correction that comes in," Forbes mentioned. "I want to start adding correction to the theory, and then we could have a new experiment to try."

The two agreed that the negative mass results and discussion highlighted an exciting fact about physics research. "It's an interesting way of probing nonlinear dynamics," Engels chuckled. "When things become nonlinear, they become a lot more interesting."