Starting as a small seed, the Synchrotron-Light for Experimental Science and Applications in the Middle East (SESAME) blossomed into a fruitful and global collaboration over the course of 20-some years. The official opening ceremony of the light source — held on May 16 in Allan, Jordan — was the end of a long road to establish the first synchrotron light source in the Middle East, and the starting point for future science. King Abdullah II of Jordan officiated at the ceremony in honor of his support of the project.

Among the attendees was 2017 APS President Laura Greene and APS Director of International Affairs Amy Flatten, who both said the event was truly inspiring. "This is an important step forward in international science diplomacy," Greene told APS News. "It was terrific to see people from these diverse countries talking to each other, sharing ideas, and being so positive about the future."

So far, some $90 million is invested in SESAME, including the value of the land, the building which houses the synchrotron, and equipment — all of which was either provided by the government of Jordan or donated by other supporting countries.

"Today sees the fulfilment of many hopes and dreams," said Chris Llewellyn Smith, the president of the SESAME Council, at the ceremony. "As well as being a day for celebration, the opening is an occasion to look forward to the science that SESAME will produce, using photons provided by what will soon be the world's first accelerator powered solely by renewable energy."

Initial research will soon begin at SESAME, which houses three beamlines that will be operational this year. Early experiments will focus on pollution in the Jordan River valley, new drugs for cancer therapy, and cultural heritage studies ranging from ancestor cultures to investigations of ancient manuscripts.

With nine member countries (Cyprus, Egypt, Iran, Israel, Jordan, Pakistan, the Palestinian Authority, and Turkey), and support from UNESCO, the SESAME project will host many experiments involving international collaboration. To keep up to date with SESAME news, visit their webpage. 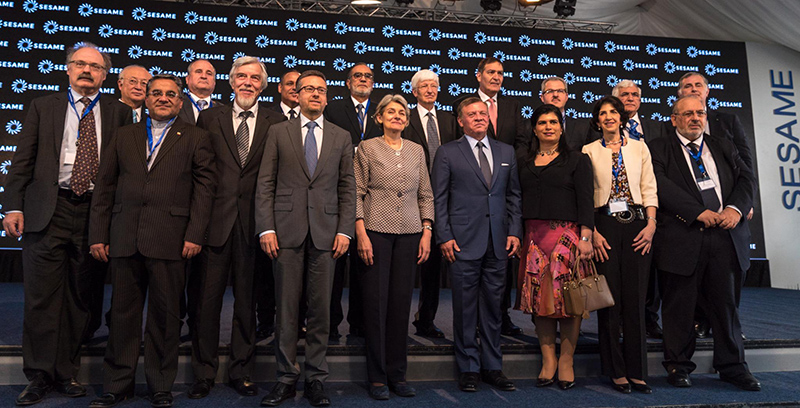 The SESAME synchrotron facility was formally opened on May 16 by King Abdullah II of Jordan (fourth from right) along with representatives of member and supporting organizations. Credit: SESAME