Big Plans Ahead For Quantum Computing

The first quantum computers are on the way. Bright and early on the first day of the 2017 APS March Meeting in New Orleans, researchers from Google, Microsoft, and Harvard University discussed their recent successes and their near-term plans for this nascent technology to a room crammed full of physicists.

John Martinis, one of Google’s quantum computing gurus, laid out the company’s "stretch goal": to build and test a 49-qubit ("quantum bit") quantum computer by the end of this year. This computer will use qubits made of superconducting circuits. Each qubit is prepared in a precise quantum state based on a two-state system. The test will be a milestone in quantum computer technology. In a subsequent presentation, Sergio Boixo, Martinis’ colleague at Google, said that a quantum computer with approximately 50 qubits will be capable of certain tasks beyond anything the fastest classical computers can do.

Researchers say that quantum computers promise an exponential increase in speed for a subset of computational chores like prime number factorization or exact simulations of organic molecules. This is because of entanglement: If you prepare entangled qubits, you will be able to manipulate multiple states simultaneously. 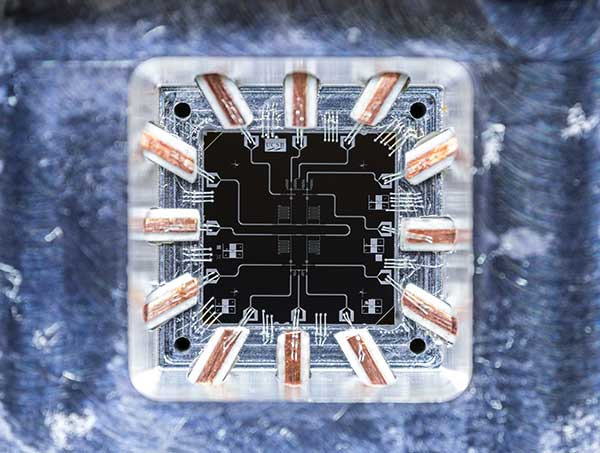 A 2014 prototype of a Google qubit (0.6 cm by 0.6 cm) known as a transmon, based on superconducting circuits. Google's quantum computing test will use 49 updated versions of these qubits.

To demonstrate that their 49-qubit quantum computer works, Martinis’s group will first precisely prepare the qubits — embedded on a chip — in an initial quantum state. Then, they will control the qubits using applied potentials and let the states evolve. Finally, they will measure the qubits’ state and compare it to a theoretical simulation of the experiment calculated by a classical supercomputer. If the final state matches their classical simulation, they will have successfully controlled the evolution of the qubits — which means they can perform quantum computations.

This particular demonstration won’t correspond to a useful computational task. It’s just to show they have control over their qubits. "It’s not a useful algorithm because it’s a random algorithm," Martinis says. "But we can still take the output of that and compare it very precisely with a computer simulation to make sure it matches properly."

They need to work out the details, but Martinis says they already have the big picture design for the 49-qubit computer. "We actually feel pretty comfortable about everything," Martinis says. This is because his group has already successfully built and tested a 9-qubit version.

Before making the 49-qubit version, they will first scale up to a 20 or 30-qubit computer. Doubling the size of a quantum computer is like making a dual-core computer when you already know how to make a single core one, Martinis says. "Of course there are interactions that you have to worry about, but once you know how to make one, it’s not hard to make two and put them together," he says.

The usual experimental hangups apply, too. "We’ll have 120 wires coming to our qubit chip, and they all have to work," Martinis says. "Of course something is going to go wrong, and something will break." It will also be challenging to control the noise: more qubits means more room for errors.

Furthermore, a universal quantum computer will need to be able to correct its errors, which result from imperfect qubit preparation or control. But error correction is not straightforward. A classical error-correction method involves duplicating data, but you can’t duplicate a quantum state — a fundamental rule known as the no-cloning theorem. Researchers have proposed quantum error correction algorithms, but the Google computer won’t use them yet.

Even so, researchers think that quantum computers of this scale will be capable of specific tasks, particularly for chemistry problems. Alán Aspuru-Guzik of Harvard University talked about using quantum computers for designing molecules for new materials. For example, Aspuru-Guzik wants to simulate organic photovoltaics for solar cells.

The speakers also proposed ways to streamline the operation of near-term quantum computers. Krysta Svore of Microsoft talked about how quantum software should be structured for easy programming and compilation. Aspuru-Guzik discussed an algorithm for simulating model systems that combines the use of both a quantum and classical computer. "You want to harness each computer to do what they do they best," he says.

In other sessions, researchers presented experimental progress on qubits themselves — not just superconductor-based ones, but also semiconductor-based ones such as silicon quantum dots. Researchers from Rigetti Computing presented a way to place superconducting qubits on an integrated circuit that could be produced on chips on a large scale. A group led by Matteo Mariantoni from Canada’s University of Waterloo presented a method to prevent errors in qubits: shield them with aluminum superconducting circuits coated in indium.

These shielding efforts reflect a fundamental challenge in engineering qubits. In order to hold information, a quantum computer needs to keep a qubit in its quantum state for a long time. "The best way to do that is to isolate the qubit from the rest of world," Martinis says. But then they can’t interact to perform a computation.

Published last month in Nature, the Google group predicted that industry will commercialize small, specialized quantum computers five years from now. "If we can do something useful and commercially viable, then there will be funding to build up the industry and scale up," Martinis says.

The author, a contributor to Wired and Physics Girl, is based in Tucson, Arizona.