What is the Evidence?

Note: This is a partial transcript of a presentation to the 2017 APS April Meeting in Washington DC, at which the author received the APS Joseph A. Burton Forum Award "For outstanding contributions as Member of Congress and CEO of the AAAS in utilizing scientific evidence to inform our government and public on important national and international issues and working to implement policies and legislation that advance our national interest and strengthen the U.S. scientific enterprise."

Thank you for the Burton Award. I've been a member of the forum since 1975; I knew Joe Burton and really liked and admired him. He also gave me my stipend check each month when I was an APS Congressional Fellow.

I am honored and truly humbled, and I wish I belonged on the list with the previous winners of the Burton Forum award: Dick Scribner and Joel Primack, who were central to founding the Congressional Fellows Program of the APS and AAAS; Frank von Hippel, with whom I still collaborate all the time on international science issues and arms control; Ted Taylor, who went from designing very reliable and usable nuclear weapons, to devoting his career to making sure they were not usable or used and were regarded as obsolete; Philip Morrison, Martin Gardiner, and Victor Weisskopf, who educated many of us directly or indirectly; Steve Fetter, John Holdren, and Ernie Moniz, with whom I had been working up until just last week; Freeman Dyson, a truly admirable iconoclast, and a delightful person to bounce ideas off of; Lizbeth Gronlund, who has done so much for arms control; Bill Colglazier, who actually works for me now at AAAS after a distinguished career.

However, I did want to mention two of the former awardees and call them out because they have been central to my public career in science. The first is Mike Casper, who was my teacher in quantum mechanics at Carleton College. He taught me not only a great deal of physics, but that a physicist can and should be involved in public issues. At Cornell, he had worked with Hans Bethe on the antiballistic missile movement and he showed that it was not only respectable for a scientist to be engaged in public activities, but really obligatory.

The other is Jeremy Stone, son of the famous journalist I. F. Stone. Jerry was a mathematician who devoted his entire life to bringing about peace. He died just a couple of weeks ago. He was for many years the head of the Federation of American Scientists. He was very influential for me, and was one of the people, when I said maybe I would run for congress, he said "you must." And he worked hard to build support and raise money for me to do it. So to be in the company of all of these Forum Award winners is truly an honor.

I must say that in the last year, though, I've spent my time trying, not to communicate with the public to help them understand, but rather to understand the public.

This has been a truly puzzling year or year and a half politically, and I must say, right now, I have never seen the scientific community so uncertain, so concerned, and so anxious. At any governmental transition, there are questions about what's going to happen with science funding, and what’s going to happen with space policy, and health policy, and other things that affect our work.

But, this is almost a different order of magnitude. I find that people, scientists, are wondering — does anybody get it at all, about the point of science? About this ingenious way of understanding the world, or as biologist Lewis Thomas said, this shrewdest maneuver for answering questions with evidence that is validated and verified.

Politicians from time immemorial have discarded inconvenient evidence and policy makers have always struggled to find a mechanism for policy making that allows scientific evidence to be central to the process.

But we scientists believe that evidence is special. We have, I would argue, a reverence for evidence.

Let me just stop for a moment, and distinguish politics from policy. Politics is the balancing of competing interests. Too often, particularly if they're thinking about getting involved in politics, scientists think that politics is dirty. Well, it can be dirty, but no more than any other walk of life.

Policy making is the attempt to solve or avoid public problems by guiding human actions and using human resources, and policy makers struggle to come up with a system that can make evidence primary in that policy making.

Well, now we find ourselves at a time where evidence isn’t just introduced in policy making in a mistaken way, or in an unevaluated way. But it is willfully denounced and banished in principle, whether it’s about gag orders at the Environmental Protection Agency or any of number of the other restrictions on scientific activity.

I think what is most troubling to us, and as I read it, to the science community at large, is that a unnerving trend that has gone on for some decades now, that I call an erosion for the appreciation of science. And it has reached a point where almost everybody realizes — this really makes a difference.

If you can have this fact, or this alternative fact, and they're equivalent, that calls into question the very idea that science is a special way for separating truth from falsehood, a special way of answering questions with evidence that can be verified.

I just want to make one point for you. It's based on the premise that you should be involved in public questions to some extent. I'm not saying everyone should run for office. But I start with that premise and then try to get to the question of, well, how.

Scientists, by virtue of our special training, do have this special obligation to be involved in public engagement, in politics, perhaps in an advisory role, or in policy making, if only at the local level.

It is a frustrating time now, a discouraging time, a disheartening time, but we should not give up trying, and I think in doing this work, we have to shift from what has been our traditional role as experts as people who understand how the physical world works.

It is easier to say, to the policy maker, to the public, here's what the science says, here is the answer, here is my direction to you. Now, that can be off-putting certainly. There are all sorts of reasons we probably shouldn't have done that over the years, but right now more than ever we must avoid that.

The whole problem is a loss of appreciation for science, not a mistaken understanding of the facts on a particular issue, but a rejection of the idea that evidence, vetted scientifically, is better than ideological assertion and opinion.

For some years I've been talking about this erosion in the appreciation of science, and people would nod and say, "Yeah I think I see that, maybe." But now, where fake news is indistinguishable in many people’s minds from fact, we have to act.

It will not be done by asserting what the facts are, but rather empowering people to handle evidence for themselves, to rebuild the traditional American reverence for evidence, and the scientist’s reverence for evidence. And let them know that, whatever their level of expertise, they can demand evidence and make some judgments about its value — on any particular piece of evidence.

They may say, "Well I’m not an expert in dealing with these complicated issues." Each of you [in the audience today] can make judgments about evidence in scientific fields that are not your own, by asking what is the evidence and making some judgments about the validity of what you hear.

We have to let people know that it is not our job to do that for them. It is their job to do it for themselves, and they can.

Rush D. Holt is the chief executive officer of the American Association for the Advancement of Science and executive publisher of the Science family of journals. He was previously the assistant director of the Princeton Plasma Physics Laboratory in New Jersey, and a 16-year member of the U.S. House of Representatives, representing New Jersey’s 12th Congressional District. Holt is a 1970 Phi Beta Kappa undergraduate of Carleton College (Northfield, Minn.), and holds M.A. and Ph.D. (1981) degrees in physics from New York University. 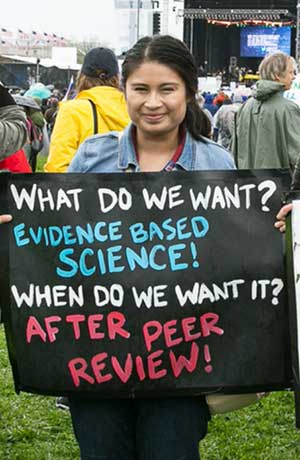