The Twitter revolution has come to APS meetings. Attendees of the 2017 APS April Meeting in Washington, D.C. sent hundreds of tweets with the tag #apsapril, creating a sort of parallel conference open not just to people in the physical meeting hall, but to anyone in the Twitterverse. And in New Orleans, physicists at the 2017 APS March Meeting sent out tweets tagged #apsmarch.

Twitter and other social media platforms can expand a conference’s reach, and enable scientists to connect with each other and quickly find out what’s going on, says Chelsea Pedé, communications manager at APS, who has tweeted as @APSPhysics since 2009. (Many individual APS departments also have their own social media identities.) She uses Twitter to promote conference sessions and communicate with conference attendees who may need assistance. "Every year I think we get a little bit better, and I think attendees use it a little bit differently," she says.

One way scientists increasingly use social media is to broadcast and amplify material from conference presentations. This was exemplified during the "Diversity in troubled times" session on the March Meeting’s opening day. University of Washington physicist Chanda Prescod-Weinstein (@IBJIYONGI), a Twitter user since 2008 who has built a following of more than 15,000 people, gave a historical presentation to around 100 attendees on how the Nazi regime sought to align German science with its ideology. Within minutes, excerpts and photos from the session were being shared, liked, and retweeted. One fan, physicist Todd Tinsley of Hendrix College in Arkansas (‏@prof_10sley), tweeted back: "My reading list just became much longer thanks to @IBJIYONGI and her ‘German scientists and complicity in Nazi Germany’." 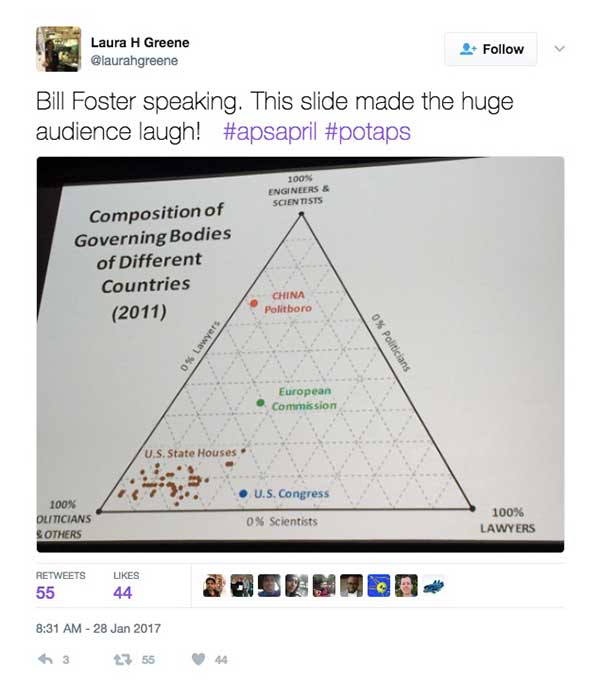 Beyond serving as a publicity channel, social media can also, as its name suggests, catalyze community among conference attendees. Shane Larson (@sciencejedi), an astrophysicist at Northwestern University who joined Twitter in 2012, uses it to connect with other scientists who have common interests. "I definitely meet people I wouldn’t have otherwise met because they know I’m tweeting and I know they’re tweeting," he says.

Twitter has also helped Larson solve one of the classic meeting dilemmas — how to choose between simultaneous sessions. He can now sit in one room while keeping tabs on presentations in others via tweets posted in real-time (a practice known as live-tweeting). "You used to have make really hard choices about what to go to," he says. With Twitter, "You can always go back [to a session you didn’t attend] and get a sense of what happened."

While tweeting during sessions might appear a distraction, Larson says that even when his thumbs are tapping on his touch screen, he’s no less engaged with what’s being presented. "The things I tweet about are almost always things I would have written down anyway," he says. "I just have to make sure those things make it into my paper notes."

Laura Greene, a physicist at Florida State University and 2017 APS president, agrees. "I’m paying attention, I take a picture, I try to say what speaker said in a few succinct words, and it helps me focus — and I’m having fun with it."

Greene is a relative newcomer to Twitter — she began tweeting as @laurahgreene last October, partly in preparation for her presidential term. Since then she’s sent more than 400 tweets and amassed more than 200 followers. Her tweet of a photo of U.S. Representative Bill Foster’s slide showing the dearth of scientists and engineers in Congress relative to the legislative bodies of the European Union and China garnered dozens of likes and retweets — not quite viral, perhaps, but among the top performers on the meeting Twitter feed.

Foster’s slide was far from the only political content that meeting attendees posted. On Friday, January 27, just hours before the meeting began, Donald Trump signed an executive order banning residents of seven Muslim-majority nations from traveling to the U.S., sending shock waves throughout the nation and the global scientific community. Meeting attendees at times found themselves struggling to tune out politics and focus on the proceedings. Prescod-Weinstein posted photos and a video from a Sunday afternoon protest at the White House, just a few miles south of the meeting venue. APS Washington Office staff implored members via Twitter to take a few minutes to contact Congress.

In this fractious environment, Greene sees Twitter as a way to engage science policy makers with whom she might disagree politically, by connecting via a shared interest in science. "I’m looking for Twitter to be a platform for science diplomacy," she says.

Politics aside, Greene also hopes social media can help do science outreach directly to non-scientists. "I want to communicate to everyone, why we do science, the joy of it," she says. "That’s a starting point."

The author is a freelance science writer based in Mount Rainier, Maryland.