Hi Reddit, I Am A Physicist… Ask Me Anything!

After five years of studying the stars, Sarafina Nance of the University of Texas at Austin, came up with a stellar explanation for Betelgeuse’s rapid rotation. To get the word out about her research, Nance published in the Monthly Notices of the Royal Astronomical Society, shared her discovery with her peers, and sat down to virtually discuss her work with the 16 million subscribers of the internet discussion forum ‘Reddit Science’:

"[Hi Reddit!]. I am a female astrophysicist who just published on the famous star Betelgeuse and found it may have swallowed another star. AMA!"

Like an interactive forum where users can pick and choose what they follow, Reddit is a large virtual community made up of sub-communities, known as "subreddits," dedicated to certain topics or ideas. AMAs (short for ‘Ask Me Anything’) were created by the Reddit community as an opportunity for intriguing individuals to answer questions about anything and everything.

"The cool thing about Reddit is that you can reach people from everywhere that you may not be able to reach in other ways," Nance told APS News. "Sometimes it’s hard, [especially] if you are publishing something on physics, but with astronomy you can see it ... so [I thought] it would be a little more accessible in that sense."

The Science subreddit (/r/science), where Nance and many other scientists post their science-focused AMAs, has attracted over 16 million subscribers, and continues to be one of the top five subreddits out of the one million created by users around the globe. Reddit is now running an official Science-AMA series, where practicing researchers and groups of scientists from all disciplines can expound upon their experiences in the lab.

For Nance, she had always known Reddit as more of an entertainment source like many other social media platforms. After seeing more technical posts from the Science-AMA series, she thought about the possibility of sharing her discovery with the people of /r/science.

"I decided to try an AMA and didn’t know what to expect," she exclaimed. "But one of the [first] questions I got was my favorite, by a seven-year-old girl named Emma. She wanted to know how many galaxies I’ve found and how to become an astrophysicist like me! … Once I got that, I was even more excited."

Like many others who choose to participate in the Science AMA series, the process of hosting your own virtual talk session can be less demanding than a live presentation and more flexible for those who are on-the-go with other obligations.

"It's not like you're standing in front of a crowd answering questions, you can pick and choose which ones you respond to on your own time," Nance explained. "I just focused on ones where I could communicate a lot of information, and the ones that reached out for mentoring. Picking the meatier [questions] and going from there helped generate conversation [among users]."

While AMAs are an innovative way to reach those outside of your academic circle, Nance found that not everyone reacts well to seeing terms like "magnetohydrodynamics" or "asteroseismology" in a personalized response to their query.

"It intimidates people when you are technical, and it tends to disengage [them]," Nance mentioned. "Just distilling your message in a way that's exciting for people — why it's relevant and how it excites you — is a great start. Once people see that, it makes [the experience] all worthwhile."

The Science-AMA series is only a single feature of /r/science; hundreds of articles about science news, journal papers, and research are posted daily on the webpage. And for users who create an account on Reddit, they are able to comment on any post they choose.

To further bridge the gap between practicing scientists and the general public, the subreddit also features the option to add some "science flair" to your comments. This system set up by administrators of /r/science aims to help distinguish between a credible or random comment. By providing a snapshot of your academic credentials to the moderators, a virtual "sticker" can be placed next to your Reddit username to show off your degree level, and area of study.

Anyone and everyone is always welcome to join Reddit, which continues to grow in subscribers each day. To learn more about the Science-AMA series and how to schedule your own AMA, you can download a free pdf of the submission guide at reddit.com/r/science.

Will Betelgeuse go supernova? Or is it massive enough to become a black hole?

Nance: Yes, it will go supernova! Though we don't think it will form a black hole, it potentially could. Stellar deaths are dependent on the mass of the star, and how much material is left after the explosion. If there's less than 3 solar masses of material left over, it'll probably become a neutron star (and that's what I'm betting on). If there's more than 3 solar masses, it could form a black hole. That's one of the reasons why it's important to try and gauge how massive Betelgeuse is — it will ultimately determine its fate.

Ok, follow up. [Betelgeuse] is relatively close to us. If it goes supernova, are we in any danger? Or will we just get the light show of the century?

Nance: No, [we will] not [be] in danger! And yes, definitely the light show of the century. We'll be able to see it at night and during the day… But we won't be in danger of any debris, or x-rays, or gamma rays. We'll just see something beautiful in the night sky.

When it does happen, how long will it stay bright?

Nance: It will probably will be bright for around 3 months — just confirmed with my advisor [J. Craig Wheeler].

What techniques do you use to study something so far away? And along those same lines, since Betelgeuse is so far away, if it goes Supernova, how long will it take us to find out?

Nance: Great question. Betelgeuse is about 640 light years away, so there's a chance (albeit a small one) that it's already exploded. However, what that really means is that it'll take about 640 [light years] for the light to reach us once it has exploded. It's also huge, which means it's very easy to see in our night sky — and you would think that would mean it's easily studied. However, it has a massive envelope around it, which actually obscures our observations. We want to see what's happening inside the star, and that envelope makes it difficult to probe.

So, we took a theoretical approach--we ran stellar evolutionary models using a code called MESA [Modules for Experiments in Stellar Astrophysics] to try to match what we were seeing with what our models produced.

My name is Emma and I'm 7 ([my] mom is helping me type by the way!) and I want to be an astrophysicist when I grow up. How many galaxies have you found? And how [much] math do you [need] to become an astrophysicist?

Nance: Hey Emma! It's fantastic to hear you want to pursue astrophysics! I do theoretical astrophysics (rather than observation) so I actually haven't found any galaxies- but I do get to model supernova explosions! I was actually horrible at math until the middle of high school, when I started getting tutored and spending loads of time on it. Don't get too bogged down in the math — enjoy star gazing and staring at the sky…!

Why did you need to include female in the title? Is being a female scientist really that unusual?

Nance: I included it because it's an accomplishment to participate, and [to] make an impact, in a male-dominated field. [According to APS], about 20% of physicists are female. Astronomy is higher, about 35% women, but still more heavily weighted towards men. I included it to help prompt discussions about being a female in science, because there are systematic gender inequalities in the field… [and] to potentially inspire other young women interested in science, to let them know that they can succeed. 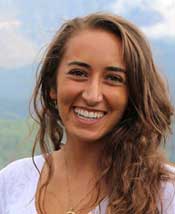