APS was the first scientific organization to coordinate a "congressional visits day" on Capitol Hill with the 115th Congress, and according to the APS members who participated, congressional staffers responded positively to the Society’s messages.

The meetings, held in late January, were part of the APS Leadership Convocation, an annual gathering of unit officers that provides an opportunity to meet and interact with APS elected leadership and staff. Attendees learn about APS programs and services, as well as network with and learn from each other.

The APS Office of Public Affairs, working with the Physics Policy Committee and the Board Executive Committee, identified five key issues for the Hill meetings. All participants were asked to discuss the federal research budget and scientific infrastructure; they were also provided optional information on science education, clean energy jobs, and managing the cost of helium.

"I was surprised and pleased at the response we received from about eight offices we visited, especially on the issues of education and science infrastructure," said E. J. Zita, a physicist at The Evergreen State College and a port commissioner in Port of Olympia, Washington.

Added Maria Spiropulu, physics professor at the California Institute of Technology and chair of the Forum on International Physics for APS, "The visit was very successful; the follow-up is important after such a visit to create persistent links with people on Capitol Hill."

Zita and Spiropulu were among 53 APS members from 23 states who participated in 82 congressional meetings. Staffers in the APS Office of Public Affairs (OPA) prepared the members for the meetings via a video presentation, web conferences, in-person training, and one-page issue briefs.

"APS set up these meetings in an organized way and prepared us with coherent messages that were really useful and helped us to be more effective," said Zita.

Spiropulu said it’s imperative for scientists to meet with their congressional representatives.

"We live in times of exponential progress in science and technology. Scientists need to take the time to explain their work and the impact of their work," she said.

"We want them to continue having those conversations about science policy. Sending emails, making phone calls, and holding meetings are all ways they can continue to keep the connection strong," said Mack.

He added he plans to follow up with APS members in key congressional districts to develop advocates to focus on state-based meetings.

Francis Slakey, interim director of OPA, said the APS members’ comments from the January meetings would be put to good use.

"We are assembling feedback from members, and the information will be used to fine-tune our messages and asks," he said. "We’ll also be sharing this information with other scientific societies to help inform their congressional visits."

To learn more about getting involved with grassroots advocacy, contact Greg Mack at mack@aps.org. 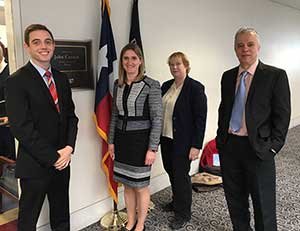