Friedrich Wilhelm Heinrich Alexander von Humboldt is justly lauded as one of the most influential naturalists in history, a polymath who traveled around the world and carefully recorded his observations in many published books. Among his lesser-known achievements was an account of the unusual behavior of electric eels.

Humboldt was born in 1769 to Alexander Georg von Humboldt, a former major in the Prussian Army. His mother — his father’s second wife — was a former baroness by marriage who had inherited a considerable fortune upon her first husband’s death. The youngster’s love of nature was evident from the start. He even earned the nickname "the little apothecary" as a child, given his penchant for collecting plants and insects, all carefully labeled and preserved.

His father died when young Alexander was just 10 years old. He was never close to his mother, but she made sure he received a proper education. Initially meant for a political career, Humboldt got to know several leading naturalists while attending the University of Göttingen, and dreamt of becoming a scientific explorer himself. But his first position was as a mine inspector for the Department of Mines in Bayreuth; his scientific endeavors were more of a hobby.

Then his older brother, Wilhelm, introduced him to Johann Wolfgang von Goethe during a trip to Jena. The naturalist returned for a three-month visit in 1797. Thanks to Goethe’s influence, Humboldt became fascinated by the emerging field of galvinism, after the two men experimented with a frog leg connected to metal and found that moisture from their breath could trigger an involuntary reaction in the detached limb. When a lightning bolt killed a local farmer and his wife, Humboldt analyzed their corpses, and he reproduced Luigi Galvani’s work on stimulating muscles and nerve fibers with electric shocks, using himself as a subject.

The death of Humboldt’s mother in November 1796 meant that he now had the financial resources to travel the world on scientific expeditions. He partnered with botanist and physician Aimé Bonpland and received permission from the royal Bourbon court in Spain to travel to the Spanish holdings in Central and South America. Their ship landed in Cumana, Venezuela, on July 16, 1799.

On March 19, 1800, during a four-month excursion to explore the course of the Orinoco River, Humboldt and Bonpland recruited natives in the South American village of Rastro de Abaso to help them capture live specimens of electric eels, which fascinated Humboldt. The creatures were difficult to catch because they burrow into the muck of shallow waters.

The natives suggested "horse fishing" — corralling several wild horses and forcing them into the shallow water. According to Humboldt’s account, the alarmed animals stamped and snorted, riling up the eels and compelling them to attack by pressing their long bodies to the horses’ bellies, releasing a series of electric shocks. Surprisingly, this worked, although some of the horses drowned in the process. The eels quickly exhausted themselves and were much easier to catch with small harpoons on ropes.

Many scientists thought this was just a tall tale — one naturalist memorably called it "tommyrot" — because nobody had observed such behavior since. But in 2016, a biologist and neuroscientist at Vanderbilt University named Kenneth Catania published a paper reporting on a series of lab experiments with electric eels. His findings lent credence to Humboldt’s account of eels aggressively leaping up and stunning the horses with a series of high-voltage discharges.

Catania argued that, under certain conditions, this mode of attack might be more effective than simply discharging electric shocks in the surrounding water. In 1838, Michael Faraday conducted his own experiments with electric eels and experienced only mild shocks, presumably because water in nature, with its copious dissolved salts, is a good conductor of electricity. Catania’s work suggests that Humboldt’s account would be especially plausible during the onset of the dry season, when eels are more likely to become stranded in shallow bodies of water.

Humboldt’s first excursion was a smashing success, and he organized more expeditions, including one to Russia in 1829. Humboldt became one of the most famous men in Europe, in part because he published so much of his work, including several lavishly illustrated popular accounts. He certainly influenced other scientists, such as Charles Darwin, who told Humboldt how much the naturalist’s writings had inspired him to want to travel to distant lands to study nature. Humboldt is cited frequently in Voyage of the Beagle. And in a letter to Joseph Dalton Hooker, Darwin declared Humboldt to be "the greatest scientific traveler who ever lived."

The cost of all those expeditions, as well as publishing more than thirty volumes about his work, gradually depleted Humboldt’s fortune. In later years, he depended on a pension awarded him by King Frederick William III, making him royal chamberlain. While initially this came with few obligations, the king insisted Humboldt return to Berlin in 1836, despite the naturalist’s love of Paris.

After a lifetime of travel and adventure in pursuit of scientific knowledge, Humboldt died peacefully at age 89 in his Berlin home, reportedly exclaiming — poetic to the end — "How glorious these sunbeams are! They seem to call Earth to the Heavens!" He was given a stately funeral procession through the city streets and was buried beside his brother and sister-in-law. He never married, and left his entire estate to his valet, sparking speculation about his sexual preferences — still a strong source of contention among historians. Ultimately, it is his scientific passion that is remembered. As Robert Ingersoll wrote, "He was to science what Shakespeare was to the drama." 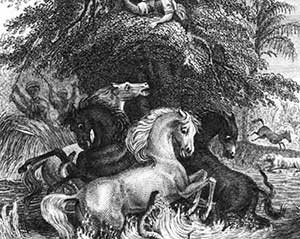