APS April Meeting 2017 — The Manhattan Project culminated in August 1945 with the dropping of atomic bombs on Hiroshima and Nagasaki, bringing World War II to a sudden and dramatic close. More than 70 years later, historians, scientists, and the public continue to study and debate the project’s genesis, impact, and legacy. That debate took the stage at the APS April Meeting 2017, where a series of sessions highlighted how the singular and storied project laid the groundwork for massive public funding of U.S. science, and reminded attendees of the very real dangers nuclear weapons still pose.

Yale historian of science Daniel Kevles said the atomic bomb project dramatically enhanced physicists’ role in society. "In the wake of Hiroshima and Nagasaki, the members of the Los Alamos generation were … a new power group in American society, thought to hold the future of civilization in their hands," he remarked. The wartime project’s infrastructure — described by Kevles as a "nuclear-industrial complex" — quickly morphed into vast peacetime bureaucracies, particularly the Office of Naval Research and the Atomic Energy Commission, which continued to grow in scope and funding. (The AEC’s functions were eventually subsumed into the Department of Energy in 1977.) 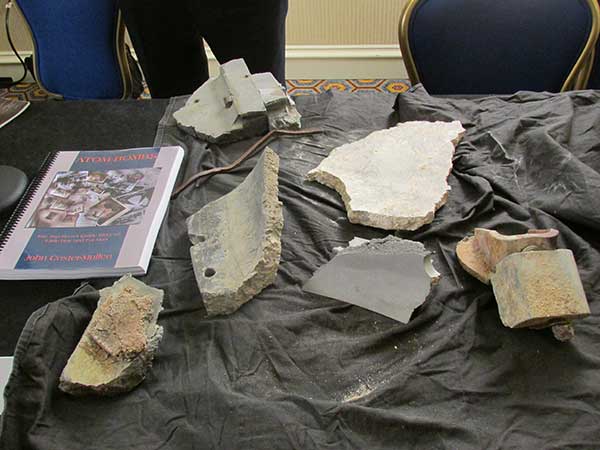 Physicists used their elevated status to both promote and try to dismantle the nuclear weapons complex. Most famously, Edward Teller argued for the development of the hydrogen bomb and led its development at the Lawrence Livermore National Laboratory. But others grew fearful of the threat posed by the proliferation of nuclear arms, and lobbied to reduce or eliminate them.

In his lecture, Timbie described how he and colleagues developed the technical mechanisms necessary to enforce arms control accords such as the landmark Strategic Arms Reduction Treaty, signed in 1991. A photo of Timbie speaking with then-U.S. Secretary of State John Kerry in Lausanne, Switzerland in 2015, during a break in the negotiations with Iran over the nuclear deal that the two countries finalized later that year, showed that physics expertise was central to the agreement. Timbie noted the need for physicists working in policy to possess both technical expertise and an understanding of how politicians think. "The science has to be right," he said, "and political documents need to be acceptable to governments."

Allen Sessoms, a professor at Georgetown University and current APS Forum on Physics and Society chair, drew lessons from his tenure at the State Department in the 1970s and 80s. In a particularly dramatic episode in 1979 (known as the "Vela Incident"), a U.S. satellite detected a flash of light in the south Atlantic, and the White House disagreed with the CIA’s assessment that it was a nuclear test, which would have violated the 1963 Nuclear Test Ban Treaty. Sessoms and his colleagues were asked for their opinions, and ultimately concluded that it was indeed a nuclear test. "Science is an add-on to the political discussion," he said, "but it allows an honest broker to give advice."

Though most talks centered on the original bombs’ development and legacy, one presentation zeroed in on the devices themselves. John Coster-Mullen, a retired photographer and truck driver from Waukesha, Wisconsin, pieced together over two decades a replica of the Little Boy uranium bomb that was dropped on Hiroshima, and self-published a book on the bomb’s design that has been lauded by experts for its accuracy.

Recently he discovered that an area where early bomb prototypes were tested has become publicly accessible, and he displayed at a press conference pieces of bomb casings that he and a colleague collected during a 2013 visit to the site. He did it all without official assistance from Department of Energy personnel, he noted, who to this day have kept Little Boy’s design classified. "There are some people who like what I’ve done and some people who don’t," Coster-Mullen said. "I have a fan base at Los Alamos because I’ve preserved a lot of their history."

Planning for the nuclear weapon-themed sessions got underway well before the 2016 U.S. presidential election. Nevertheless, Donald Trump’s nascent presidency added a note of urgency to the proceedings. Speakers noted the decision by the board of the Bulletin of the Atomic Scientists to advance the hands of its "doomsday clock" to 2.5 minutes before midnight. They also cited President Trump’s statements and tweets suggesting an ambition to rebuild the U.S. nuclear arsenal, and the lack of technical expertise held by Rick Perry, the nominee to head of the Department of Energy, in contrast to his predecessor, physicist Ernest Moniz.

As the threat of nuclear weapons regains currency after a post-Cold War lull, and while many of the experts who have long advised the government approach retirement, a new generation of physicists must get involved, speakers urged. Technical expertise will continue to be needed to steward existing weapons stockpiles, establish and enforce monitoring regimes to prevent additional countries from acquiring weapons, and advise governments on the severity of threats from newly nuclear-armed countries such as North Korea.

That expertise should be provided no matter which party is in charge in Washington, Sessoms added. "Nuclear weapons are not an ideological issue."