APS April Meeting 2017 — Some things stand out best when the lights are dimmed. On August 21, 2017 nature will turn down Earth’s brightest light of all, when the shadow from a total solar eclipse passes coast-to-coast over the United States. From Newport, Oregon to McClellanville, South Carolina, this total eclipse will plunge parts of 12 states into darkness lasting up to nearly three minutes. "We are trying to persuade people how wonderful it will be to travel into the path of the eclipse," said Jay Pasachoff, an astrophysicist at Williams College in Williamstown, Massachusetts, speaking at a press conference at the APS April Meeting 2017 in Washington, D.C. "This goes for the general public, for physicists, and for teachers and their students."

Solar eclipses have played important roles in physics history, from Pierre Janssen’s discovery of helium in 1868 to Arthur Eddington’s experimental confirmation of Albert Einstein’s general relativity theory in 1919. The 2017 eclipse will add to that legacy, says Edward DeLuca, an astrophysicist at the Harvard-Smithsonian Center for Astrophysics. "This eclipse is going to be very productive scientifically, because the path covers a large area of a very populous, high-technology country." 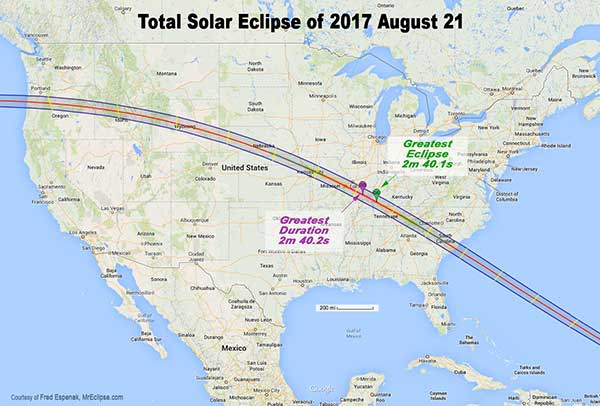 The August 21, 2017 solar eclipse can be seen across the continental United States.

Many of the planned observations will focus on the sun’s corona — massive wisps of plasma that jut from the solar surface up to millions of kilometers into space. The corona is usually outshone by the sun by around a million times, making its light difficult to isolate. Instruments called coronagraphs can block much of the sun’s direct glare, but because the moon’s angular size from Earth is so close to that of the sun, solar eclipses still provide the best view, especially of the inner corona near the solar surface. "It’s a unique perspective to focus our instruments onto just the corona," says Steve Clarke, director of NASA’s Heliophysics Division, which is funding 11 eclipse studies.

What goes on in the corona can shed light on the inner workings of the sun. The sun is now approaching a solar minimum, the low point in the sun’s 11-year activity cycle. Though the number of sunspots on the sun’s surface is the cycle’s best-known feature, the sizes of coronal plumes are also affected by it. From an outpost on the campus of Willamette University in Salem, Oregon, Pasachoff will add photographic and spectroscopic data to his decades-long series of eclipse observations, to track how the corona changes through the cycle’s peaks and valleys. He will then look for clues as to whether the sun has finished going through its current minimum, or whether the next cycle may be delayed, as some suspect.

Pasachoff will also gather data to try to understand how the corona gets so hot — up to a million kelvin, compared to only around 5,800 kelvin at the sun’s surface. "There are 12 different models" to explain coronal heating, Pasachoff says. "There are a bunch of people who say they know, but they disagree. We’re trying to provide some observational backing."

As society has become increasingly technology-dependent, understanding the corona has become important for a broader group of stakeholders than just scientists. Solar storms — blasts of powerful charged particles that stream out from the corona — can bring down power grids and disrupt GPS and communication satellites. But prediction of solar storms is poor, with scientists sometimes able to provide only around an hour’s warning before a major solar storm arrives at Earth, says Clarke.

To improve such predictions, Shadia Habbal of the University of Hawaii will deploy teams of "solar Sherpas" with portable spectrographs to several sites in the western U.S., where skies are most likely to be clear, to look for visible emission lines from iron and other elements that have been highly ionized by the corona’s extreme temperatures. These data will help her produce what she calls "a temperature map of the corona." Such a map could help scientists better understand the formation of coronal mass ejections — massive blobs of fast-moving particles that cause some of the biggest challenges to Earth-based infrastructure.

DeLuca, meanwhile, will fly in a National Science Foundation-funded airplane from southeastern Missouri to Tennessee, over the region where the eclipse will last the longest. His team will test a spectrograph designed to observe infrared emission lines, most of which are blocked from reaching the ground by water vapor in Earth’s atmosphere. These data could serve as a proxy for the sun’s internal magnetic field, which is believed to be largely responsible for space weather, but whose behavior remains poorly understood.

By the time August 21 rolls around, solar physicists like DeLuca, Habbal and Pasachoff will have spent more than a year preparing for less than three minutes of data collection. It’s worth it, they say. "People ask me all the time, haven’t you seen enough eclipses?" said Pasachoff, who holds the world record of most eclipses viewed, at 65. "I say, if you were a heart surgeon and somebody told you this is your only opportunity to look inside a human heart, but it’s only for two minutes and you have to go to Africa, nobody would say ‘Didn’t you do that four years ago?’"

"Until we can make artificial eclipses in space as good as what we get here on Earth," he added, "It’s very worthwhile to study solar eclipses."

The author is a freelance science writer in Mount Rainier, Maryland.