Physics for the Masses

"You must be very intelligent" is one of the better reactions we physicists evoke when interacting with the general public. In fact, probably what members of the public mean is that physicists "are very boring." Try it at a family gathering, in an airplane, at the grocery store, in a bus, or any occasion when you are with nonscientists. Keep in mind that these very same people are the voters that decide who will make future major decisions regarding scientific funding and the direction of science.

The public can be divided into three groups: a small minority that is in constant contact with scientists and thus may understand somewhat what we do, a minority (probably less than 1 percent of the population) that has a positive appreciation of science, and a large majority that neither understands science, the connection to technology, nor the funding process for science. This large majority, in the best case, believes that we are dedicated to solving short-term practical problems such as curing cancer, developing green energy, reducing global warming or developing bigger bombs. Alternatively, they may believe that we work in purely philosophical, esoteric areas, unconnected to their daily lives.

Unfortunately, as a result of whom they vote for, this large majority ultimately makes important decisions regarding funding, the validity of certain theories such as evolution, and even the importance of science for decision making in the government. Simply put, a large uninformed public makes collective decisions about science, which not only impact the well-being of science but also the future of the world. I believe the current situation is bad and seems to be getting worse.

I have presented the issues outlined above to many different audiences of scientists and heard many criticisms, including:

Sorry. None of the above statements are valid. Not only is our (scientists’) well-being at stake, but also the well-being of the world. Perhaps most importantly it is our obligation to inform the public!

In order to propose specific solutions to this problem it is important to understand that there are three areas which must be explained to the public in a steady, continuous and relentless fashion: the funding process, the effect of physics on technology, and the scientific method. These are also in the order in which they are easier to explain and probably receive a more positive reception from the public.

The public perceives that the funding process for university research is as follows: Highly paid professors get a cohort of students, are well funded by the university, dedicated to traveling to exotic places for so called "scientific meetings," working short hours, and having free summers for vacations. They don’t know that generally we are paid for only nine months (mostly for teaching), that we have to get grants to fund salaries and tuition for graduate students, pay for all scientific costs, and that in our travels we are mostly inside a meeting room discussing highly technical matters. They don’t really know that all the funding comes from sources outside our universities and that on top of it we pay a whopping "overhead," often more than 50 percent, that doesn’t go to research. When explained the reaction from the public is either incredulity or astonishment that anybody would do this. This is easy to explain.

The relationship of physics to technology is harder to explain. The public believes that single personalities such as Steve Jobs come up with an idea such as the iPhone from scratch. They don’t understand that many of these developments are based on work of many individuals and that without detailed scientific knowledge they would not be possible. There are many examples of technological developments that the public encounters on a daily basis, and these of course have their origins in basic science. Since the public can relate to technology, this is a good avenue to explain that the quality of life has enormously increased because of the discovery of X-rays, invention of the laser, development of ultrasound or MRI, wireless communication, computers, etc. All are a consequence of science.

The importance of fundamental science is the hardest to convey. The public doesn’t realize that marvelous technology arises, often unexpectedly, from scientific discoveries such as the basic physics of semiconductors, the discovery of giant magnetoresistance, and the invention of the World Wide Web. This has to be communicated in many different ways and it is not clear to me if there is a single approach to explaining fundamental science to the general public.

Probably most of you have encountered these issues in some form or another. Perhaps you don’t agree with some of the details I raise, but I hope that we all agree on the general spirit. Science is not appreciated and something must be done. From the practical point of view, the most important point to realize is that the large majority of the public does not want to take a science class or have complicated facts explained to them. When somebody asks you the time, there is no need to explain how the watch works! The best we can hope is to convince the public that science is good and that it eventually improves the quality of life more than any other human activity.

It is very important to realize that not everybody can do this. The most important and perhaps difficult thing to convey is the passion many of us feel for physics. While delivery techniques can be improved and learned, passion is hard to learn and convey. So forcing everybody to contribute is not the right approach. This should be left to the few that have interest, are willing to spend time, and are passionate about it. It is especially important not to force young people who are starting a research career to spend time proselytizing to the public. Those that can do a good job will surface on their own. They can’t be forced!

At the personal level many of us can help out the situation if we recognize that there is a need and are willing to sacrifice some time. There are many activities that one can perform individually without much bureaucracy:

What is attractive about these personal activities is that they are not regimented, can be done when one has time, and in the area in which one feels most comfortable. If you feel this is important and that not enough is done, at least you can have a personal satisfaction of having done something.

I propose here several possible practical solutions that APS can do, to perhaps modify the status quo:

Perhaps an effective way to implement these and many other possible ideas is to hire a marketing company to develop a well-designed advertisement campaign.

In any case, I am sure that independent of anything that is done by others, I will continue contributing to this effort as much as I can. Please, join me!

Acknowledgement: I thank Y. Bruynseraede and E. D. Dahlberg for critical reading of this article.

The author is a condensed matter physicist and director of the Center for Advanced Nanoscience at the University of California San Diego. He is a winner of major awards such as the Lawrence Award from the U.S. Department of Energy, several awards from the APS, the Material Research Society, and the International Union of Materials Research Societies. He has also won several regional Emmy awards and other television awards for his science-related movies. He has served the APS in many capacities as Chair of FIP, DMP and FOEP and various other committees in which he emphasized outreach activities to the general public and the legislature. Schuller received his Licenciado from the University of Chile, Ph.D. from Northwestern University, and an Honoris Causa Doctorate from the Spanish Universidad Complutense. He is a member of the Chilean, Spanish, Belgian and Colombian academies of science. 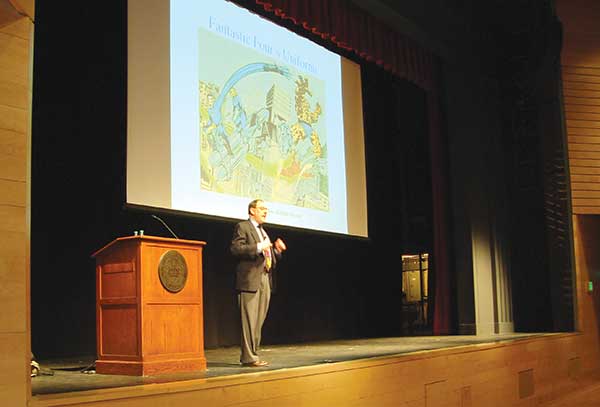 Public lectures are an important part of connecting with voters who elect representatives who make decisions about science funding. Here, James Kakalios of the University of Minnesota talks about the physics of superheroes. 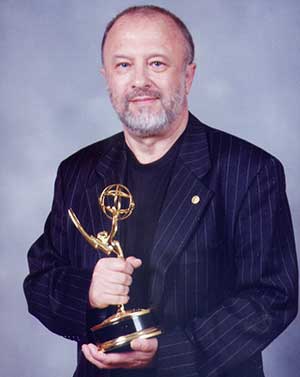 The author with his Emmy award.