NASA’s lunar missions in the 1960s and 1970s were designed for serious science, but that didn’t stop its astronauts from finding creative ways to let off steam. One astronaut became the first man to experimentally investigate the ballistic properties of textured polymer spheres in non-terrestrial gravitational fields. In other words, he hit a golf ball on the moon.

Alan Shepard, Jr. was born in New Hampshire in 1923, part of a long line of descendants dating back to the Mayflower. He was bright enough to skip two grades before graduating from Pinkerton Academy. And he loved airplanes, taking informal flying lessons in exchange for doing various chores at nearby Manchester Airport. The onset of World War II prompted him to enter the military. He passed the U.S. Naval Academy entrance exam at just 16 — too young to be enrolled until the following year. (He spent the interim at a naval prep school.) 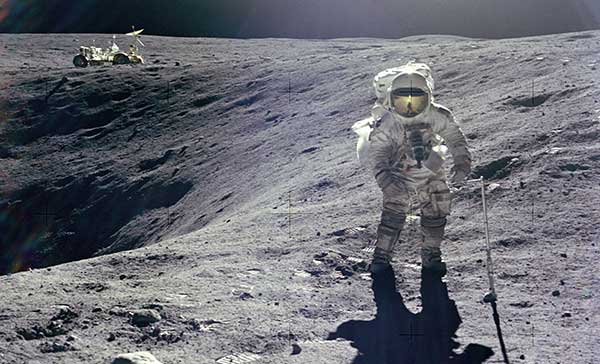 Astronaut Alan Shepard practices his golf swing on the moon.

Shepard was first assigned to the USS Cogswell, and found himself weathering typhoons and attacks by Japanese submarines and kamikaze pilots — including rescuing over a hundred sailors from a torpedoed cruiser. He eventually served as a gunnery officer as the war came to an end. After Japan surrendered in September 1945, Shepard began basic flight training in Corpus Christi, Texas. He initially struggled in the program, resorting to private flying lessons and earning a civilian’s license to improve his skills. It wasn’t the typical approach for an aspiring Navy pilot, but it worked: He was approved for advanced training, and soon earned his wings.

Shepard spent the next couple of years piloting a F4U Corsair, including a nine-month stint in the Caribbean. Also, he served as a test pilot at the Naval Air Station Patuxent River, in Maryland, where his daredevil nature nearly led to a court-martial after he cheekily looped the Chesapeake Bay Bridge during a test flight. He escaped that fate due to timely intervention by his superiors. He forged a very respectable naval career in the ensuring years, logging over 3600 hours of flight time.

By 1959, President Dwight D. Eisenhower had established a fledgling federal space agency, and NASA began recruiting military pilots as potential astronauts for the planned fleet of Project Mercury spacecraft. Shepard was one of the 32 preliminary candidates selected, and once he’d received assurance that volunteering for the program would not damage his military career, he agreed to participate. After an exhaustive battery of tests, he became one of the seven Mercury astronauts, along with Scott Carpenter, Gordon Cooper, John Glenn, Gus Grissom, Wally Schirra, and Deke Slayton.

Project Mercury did not have a smooth beginning. Just a few weeks after astronaut selection, an unmanned Project Mercury rocket launched at Cape Canaveral failed spectacularly, exploding after liftoff as the astronauts watched. Shepard’s response: "Well, I’m glad they got that out of the way."

After a fierce competition, Shepard was chosen for the first American manned mission into space.

The goal of Project Mercury was to beat the Russians to the punch, but the mission kept getting postponed. So on April 25, 1961, Russian cosmonaut Yuri Gagarin became the first man to travel to space. Shepard followed suit less than one month later, on May 5, and his flight was broadcast live to millions of television viewers. Asked by reporters what he was thinking while waiting for liftoff, Shepard quipped, "the fact that every part of this ship was built by the lowest bidder."

His successful flight made him a national hero, and he remained active in Project Mercury until it was shuttered in June, 1963 — just before Shepard was slated to go into space again as part of the Mercury-Atlas 10 mission. The silver lining: He was chosen as command pilot of the first manned mission of the new Project Gemini. But then he started having severe dizziness episodes with a loud ringing in his left ear. NASA’s doctors discovered he had Ménière’s disease — an abnormal volume of fluid in the inner ear — and attempts to drain it proved ineffective. They also found he had glaucoma, and a lump on his thyroid.

Shepard found himself grounded, having to watch fellow astronauts Grissom and John Young fly his Gemini mission instead. He assumed administrative oversight of the NASA astronaut program as Gemini gave way to the Apollo mission — during which the U.S. sent the first astronauts to the moon. Four years later, a colleague put him in touch with a Los Angeles otologist who could cure the inner ear disease with surgery, draining the fluid by way of a small tube.

The procedure worked, and Shepard was cleared for flight in May 1969 — just in time for the Apollo 13 moon mission. But Shepard and his relatively inexperienced crew (their colleagues dubbed them "the three rookies") were ultimately turned down for the mission, in order to give them more time to prepare. Jim Lovell famously replaced him as commander, and Apollo 13 would go down in history as NASA's most successful failure. Shepard commanded the successful Apollo 14 mission, becoming the fifth man to walk on the moon, as well as the oldest at 47.

The mischievous Shepard, a golf enthusiast, had planned a surprise for the millions of Americans watching the televised broadcast of his final moonwalk. He smuggled a collapsible golf club and golf balls aboard the spacecraft, and just before returning to the lunar module, he hit two balls with the club. The first plunked down into a crater, but according to Shepard the second flew for "miles and miles." That was likely an exaggeration, but astrophysicist and blogger Ethan Siegel has calculated that a perfect shot on the moon could easily travel 2.5 miles.

Shepard resumed his administrative position at NASA, eventually retiring from both the agency and the Navy in 1974. A leukemia diagnosis in 1996 grounded him once and for all; he succumbed to complications from the disease on August 25, 1998. His wife Louise survived him by just five weeks, dying of a heart attack. A Navy helicopter scattered their ashes together in a cove near their home in Pebble Beach, California.