One of the oldest and most venerated scientific associations is the Royal Society of London, established in 1663. Its founding brought together various groups of natural philosophers that met regularly in London and Oxford, keen on exploring the "new science" espoused by Francis Bacon. One of those founding members was Robert Boyle, often called the first modern chemist. But he is best known for formulating a physical law on the relationship between absolute pressure and the volume of a gas.

Boyle was born in Ireland in 1627, one of 14 children. His father was the Earl of Cork and a wealthy landowner. Young Boyle was raised by a local foster family until the age of eight, and was fluent in Irish as well as Latin, Greek, and French. He went to Eton College when his mother died, with an Irish-speaking tutor in tow, although Boyle was apparently not much interested in practicing his mother tongue, preferring French and Latin. A trip to Florence, Italy in 1641 while living abroad introduced the precocious 14-year-old to the work of Galileo, who died while Boyle was there. He returned to England with a passion for science and math. He also had the means to pursue that passion when his father died and left him substantial property in both England and Ireland.

Initially Boyle sought to be a writer, experimenting with many different forms, such as a treatise on morality and the pursuit of virtue. But then he built a home laboratory and began experimenting with microscope observations and chemical experiments. While he resided briefly in Ireland, he found it difficult to perform his chemistry experiments there. He spent much of his time in Oxford or London, becoming a member of a group of like-minded natural philosophers who dubbed themselves the "Invisible College." The group’s core values were observation and experimentation, not just logical reasoning. Its motto: nullus in verba, or "Take nobody’s word for it." It would eventually become the Royal Society of London for Improving Natural Knowledge.

In 1650, scientists across Europe were electrified at news of the world’s first artificial vacuum, created by a German scientist named Otto von Guericke. He fit together two large copper hemispheres and used a vacuum pump — which he also invented — to pump out all the air, so that the surrounding air pressure continued to hold the hemispheres tightly together. To demonstrate just how strong that force was, von Guericke harnessed two teams of eight horses each to each hemisphere and set them moving in opposite directions. Even this didn’t separate the hemispheres.

Boyle was intrigued by the reports and set about building his own "pneumatic engine" with Robert Hooke, then Boyle's assistant, whose gift for instrumentation proved useful in getting the rather awkwardly designed apparatus to work. They conducted many different experiments to determine the properties of air, specifically how "rarefied air" affected things like combustion, magnetism, sound, barometers, and various substances. Those observations became the basis for his 1660 book, New Experiments Physico-Mechanicall, Touching the Spring of the Air, and its Effects (Made, for the Most Part, in a New Pneumatical Engine).

Although it received high praise upon publication, the book was not without its critics, most notably a Jesuit priest named Francis Linus. This was a time when many scientists believed the vacuum did not exist, arguing that Boyle’s observations must be due to a previously unknown force. Boyle’s exchanges with Linus resulted in a second edition in 1662, including an appendix addressing Linus’s critiques with a reference to what we now call Boyle’s Law (even though it was first formulated in 1661 by Henry Power): The volume of a gas varies inversely with the pressure of the gas.

Following that initial success, Boyle continued conducting chemistry experiments and publishing the results for the rest of his life. He expanded upon his vacuum pump work in A Defence of the Doctrine Touching the Spring of the Air, Experiments and Considerations about the Porosity of Bodies, and Experimenta and Observationes Physicae. He also wrote several medical treatises, and did experiments on crystals, electricity, color, hydrostatics, and the expansion of freezing water.

Among his quirkier contributions: a "wish list" of 24 possible inventions that eerily foreshadowed modern technology. These included "the prolongation of life" and "the art of flying," as well as "making armour light and extremely hard" and "potent drugs to alter or exalt imagination." Almost all of his proposed inventions exist in some form today.

While he helped usher in the age of modern science, Boyle had a mystical bent, ever since he witnessed a particularly striking thunderstorm while traveling through Europe as a young man. He was a practicing alchemist, believing it was possible to transmute metals, even helping to repeal a statute prohibiting multiplying gold and silver, just in case he should succeed.

By 1669, Boyle’s always frail health declined precipitously, to the point where he was unable to continue his involvement with the Royal Society, and he limited visitors to specific days in the London home he shared with his sister Katherine Jones, Lady Ranelagh — who shared his interest in science to such an extent that they edited each other’s manuscripts. But he continued working privately on chemical experiments for the next 20 years, "as a kind of Hermetic legacy to studious disciples of that art." He died of paralysis on December 31, 1691, one week after his sister. And he contributed to science from beyond the grave, endowing the Boyle Lecture series.

Canny, Nicholas, The Upstart Earl: a Study of the Social and Mental World of Richard Boyle. Cambridge: Cambridge University Press, 1982. 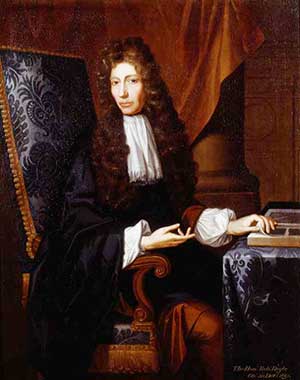 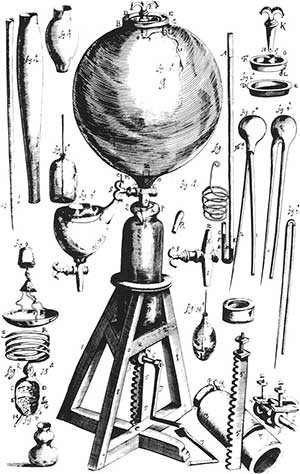