In 1930, the Institute for Advanced Study (IAS) was established near the grounds of Princeton University to act as the "department store for the freedom of ideas." The original and often speculative thinking that the Institute encouraged over the years made it one of the world’s elite intellectual centers, supporting over 33 Nobel Laureates and scores of medalists and winners of prestigious awards.

This year, APS teamed up with the European Physical Society (EPS) to recognize IAS for its pivotal involvement in the advancement of theoretical physics, naming IAS their inaugural joint historic physics site in the U.S.

"We are very pleased to be partnering with the European Physical Society in selecting the first ever Joint Historic Site for physics in the United States," said 2016 APS President Homer Neal. "The Institute for Advanced Study has been one of the premier centers for theoretical physics in the world, hosting physicists in all stages of their careers."

Among these physicists was Albert Einstein, who joined as one of the Institute’s first professors just three years after its establishment. Einstein remained at the Institute until his death in 1955, leaving a 20-year legacy in the history of the Institute’s growth and reputation.

"One thing Einstein did here was his work on the EPR (Einstein-Podolsky-Rosen Paradox), so I feel in some sense we are appropriately awarding the entangled lives of European and American physics," joked the Director of the Institute, Robbert Dijkgraaf, at the ceremony.

"As many of you know, a year ago we had a celebration of the first EPS-APS joint site in Switzerland at the Einstein House," added APS CEO Kate Kirby. "Now to a certain extent, this [ceremony] completes the journey of Einstein here to the U.S., and we are delighted to be recognizing the Institute."

Created in 2004, the APS Historic Sites Initiative was started by the APS Executive Board to raise public awareness of physics. In pursuit of this mission, the Society established a Historic Sites selection committee to evaluate potential historic physics sites in the U.S. When a site is chosen, a ceremony is arranged at which a plaque is presented by members of the APS presidential line.

"The APS historic sites initiative started 12 years ago, and since then it has recognized about 40 sites around the U.S.," Kirby continued. "Its focus is on bringing significant events in physics to the public's attention, which I think is a great tradition."

Author and historian George Dyson gave a public lecture at the ceremony. His father, Freeman Dyson (who attended the ceremony), joined the Institute as professor of physics in 1953. George was born the same year, and eventually became the Director’s Visitor at IAS between 2002 and 2003, where he spent his time exploring the Institute’s archives.

His presentation, titled "The Institute for Advanced Study: The First 100 Years," encapsulated his story of how and why the Institute came into being. As a witness to historical firsts in science research and significant events at the Institute, he attracted a large crowd.

One of the major innovations that stemmed from the Institute was John von Neumann’s Electronic Computer Project. With no laboratory facilities at Neumann’s arrival in 1945, his idea was forced to slowly take shape in the basement of the Institute's Fuld Hall.

"[John von Neumann, Oswald Veblen, and Frank Aydelotte] were proposing to do what we take for granted today — they wanted to build a global model of all the weather in the world," explained Dyson. "This grand vision, that the weather in the world could be modeled inside these digital vacuum tubes faster than the weather itself … [to eventually] run the model and then make predictions."

In recognition of the joint honor, the President of EPS Christophe Rossel presented both Neal and Dijkgraff with individual copies of Albert Einstein: "Those Happy Bernese Years", by Ann M. Hentschel, Gerd Grasshoff, and Karl Wolfgang Graff.

The plaque is located at the entrance of Bloomberg Hall, and was officially commemorated on November 9, 2016. To watch the recorded lecture, visit the IAS webpage. 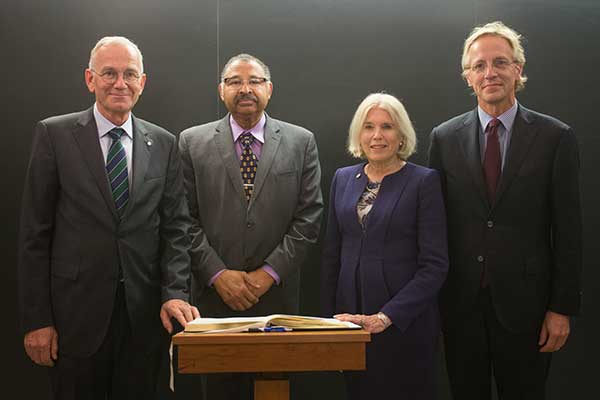