It is ten years since I wrote a Back Page article “The Mother (Nature) of All Wars?” which pointed to a connection between the physics of complex systems and human conflict including terrorism (APS News, November 2006). A lot of things have changed in the world since then, one of which is the expansion of the Internet to 3.5 billion users — that’s nearly 1 out of 2 of the world’s population. An immediate impact of this Internet expansion has been an increase in availability of information about individual violent events related to conflicts and terrorism at the daily level.

This has enabled a thorough testing of the conjecture reported in that 2006 article, that modern conflicts including terrorism follow an approximate power-law distribution for the severity of events, with a universal exponent near 2.5. That approximate “2.5 law of war” has now been confirmed using new databases from multiple recent and pre-existing conflicts including insurgencies, as well as updated terrorism databases[1]. Also thanks to Internet reporting, a power-law trend has been identified in the timing of attacks in conflicts that is interpreted as a non-Markovian stochastic walk between a Red Queen (i.e., small but agile state opponent) and a Blue King (i.e., large but more sluggish state). This mechanism represents a dynamical generalization of the Red Queen hypothesis[2] from evolution. Also, the availability of Google maps has led to better understanding of how casualty data should be collected — in particular, it led to the unraveling of “main street bias” in casualty data collected from epidemiological surveys during the most recent Iraq war. In that study[3], a network model from physics was used to identify the likely source of bias as being due to clustering along major thoroughfares owing to surveys being concentrated there.

But the impact of the Internet on human conflict goes much further than a convenient reporting outlet for daily events. As shown by the world’s ongoing experience with ISIS (the so-called Islamic State), it can serve an extremist entity as a primary tool for recruiting, organizing, and inspiring attacks across the globe. Yet this also means that there are likely digital footprints available to researchers for developing a dynamical model of such collective human extremism. As a result, much work has focused on data from Twitter to identify influential online individuals. However, such “single particle” approaches have met with only limited success, in part because removing #1 from any extremist network automatically leads to #2 becoming #1, #3 becoming #2 etc.

The limited success of individual-based approaches makes sense from a physics perspective, since it is akin to attempting a single-particle approach to understand many-body phenomena such as the fractional quantum Hall effect and superconductivity. Instead, we know from physics that the power behind such collective phenomena lies in the correlations between aggregates of particles, not single-particle behavior. And it turns out that the same is true for online extremism, with social media groups playing the role of collective quasiparticles.

Social media groups are now a big feature of networking websites, since they allow individuals — including any of us — to get together virtually and share information, opinions, etc. Supporters of ISIS around the world do the same. But instead of, for example, sharing more mundane news or ideas concerning a social event or sports team, they exchange operational information concerning ISIS. Their discussions frequently included details of fundraising for potential fighters who wanted to travel to Syria or transferring funds for fighters already there. They also share details about survival skills, such as how to use cellphones and the Internet without being detected by security services, and how to prevent or repel a drone attack or evade certain types of drones. The information and narratives shared by these online groups may ultimately inspire some of its followers to carry out terrorist acts — including lone wolf actors, who may have no prior history of extremism, no formal cell membership, and no direct links to leadership.

Setting out to study the many-body dynamics of pro-ISIS online support, we found that Facebook rapidly shuts down such pro-ISIS groups. However, its overseas competitors can be slower to act, probably because doing so would require significant amounts of resources and time. The most important among these is VKontakte which has more than 350 million users spread across the world, but which is physically based in the politically sensitive area of Central Europe near ISIS’ major area of operations. 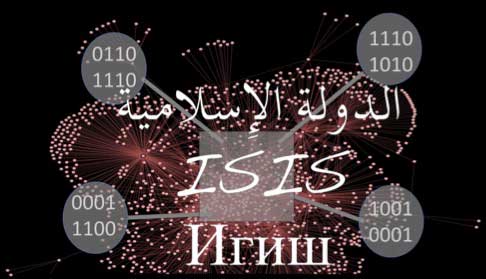 Online pro-ISIS aggregates are made up of interacting individuals. 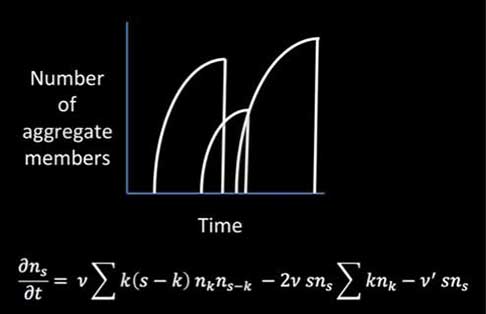 The graph shows an example of the aggregate size (i.e., number of members of an online group or community) as time increases, for three example aggregates. Below the graph is the equation that correctly describes these aggregate dynamics within a mean-field approximation.

Our study of VKontakte between January 1 and August 31, 2015 uncovered an ultrafast ecology of 196 pro-ISIS aggregates[4] (i.e., online groups and communities) that share operational information and propaganda, involving 108,086 individual followers. Although these aggregates are typically shut down by online moderators within a few weeks of being created, their members would simply go on to form another aggregate or join an existing aggregate that was still evading shutdown. The high-resolution aspect of our data also meant that this study moved beyond the current focus of the network science field on identifying community structure in time-aggregated networks. Instead, we can see followers’ behavior in real time down to a timescale on the order of seconds. It also moves the understanding of human dynamics beyond the current focus on quasi-static links related to family or long-term friends, toward operationally-relevant dynamical interactions.

Figure caption: The graph shows an example of the aggregate size (i.e., number of members of an online group or community) as time increases, for three example aggregates. Below the graph is the equation that correctly describes these aggregate dynamics within a mean-field approximation.

The evolution of this aggregate ecosystem follows a rather precise mathematical form similar to fragmentation-coalescence processes in physics (e.g., polymers). But unlike physical or chemical systems where individual units might break off or the aggregate might break into a few pieces, the fragmentation is now like a shattering process reflecting the sudden moderator shutdown of an aggregate. Most importantly, this is exactly the same coalescence-fragmentation process that had been conjectured for real-world conflicts in the original Back Page article of 2006 but had never been observed directly. Solving the mean-field equation yields an approximate power-law with exponent 2.5, exactly as observed from the empirical data for the online aggregate average sizes and also for the distribution of casualties from previous conflicts and terrorism. So taking the size of an aggregate in the real world as indicating its potential impact in an event, and hence the number of casualties that it would generate, then this same process of collective human aggregation describes quantitatively both online and offline extremist behavior — it is just that online it becomes turbocharged thanks to the Internet making it faster and with now potentially global reach.

We also identified new evolutionary adaptations that these pro-ISIS aggregates have managed to find. Some may go invisible for a while, and also occasionally reincarnate, appearing at a later date with a different identity and yet managing to retain most of their members. So just as Darwin predicted what happens in biological evolution, pro-ISIS support has adapted to exploit features afforded by its new online environment (i.e., social media website) in order to survive longer.

The practical consequences are many-fold. Identification of the coalescence-fragmentation mechanism suggests that anti-ISIS agencies can step in and break up small aggregates before they develop into larger, potentially powerful ones. If anti-ISIS agencies aren’t active enough in their countermeasures, pro-ISIS support will quickly grow from a number of smaller aggregates into one super-aggregate. Also, if aggregate shutdown rates drop below a certain critical value[5], any piece of pro-ISIS material will then be able to spread globally across the Internet — ultimately leading to an Internet arms race. Finally, the birthrate of these aggregates escalates in a particular way ahead of real-world mass onslaught, just as clusters of correlations begin to proliferate ahead of a phase transition in a physical system — except this is now a dynamical phase transition in time. The important role of these aggregates also ties in nicely with earlier work on guilds in the massively parallel online game World of Warcraft[6].

Furthermore, it means that instead of having to sift through millions of Internet users and track specific individuals through controversial profiling techniques, an anti-ISIS agency can usefully shift its focus toward open-source information to follow the relatively small number of aggregates in order to gauge what is happening in terms of hard-core global ISIS support. But perhaps most importantly in light of the massacre in Orlando and bombings in New York, this coalescence-fragmentation mechanism of online support means that any online lone-wolf actor will truly be alone for only short periods of time. Since individuals with serious interest in ISIS online tend to coalesce into these aggregate groups, any such lone wolf was likely either recently in an aggregate or will soon be in one. By knowing the groups and hence narratives to which such individuals have been exposed in the past, it might ultimately be possible to predict the type of event that they become capable of perpetrating.

As for the future, even if pro-ISIS support moves onto the dark net where open access is not possible, or if a new entity beyond ISIS emerges, these many-body findings should still apply, since they appear to capture a basic process of human collective behavior. Independent of cause, we can assume that the same types of many-body coalescence-fragmentation phenomena will arise.

Neil Johnson leads the Complexity Initiative in the College of Arts and Sciences at the University of Miami, where he is Professor of Physics. He is funded by the National Science Foundation and by the Air Force Office for Scientific Research. Personal website 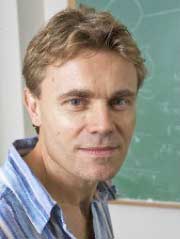